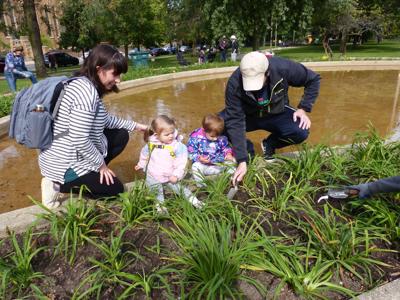 Leila “Lee” Botts, 91, a pioneering and widely recognized environmentalist associated with efforts to protect and restore the Great Lakes, died of natural causes on Oct. 5 in Oak Park.

Botts and her family lived in Hyde Park for many years, and she was active in numerous environmental issues, including the attempt to prevent the widening of Cornell Drive in the 1960s.

She was born Leila Carman on Feb. 28, 1928, in Mooreland, Oklahoma, and grew up in the heart of the 1930s “Dust Bowl.” She attended Oklahoma A&M University (now Oklahoma State University), where she met Lambert “Bud” Botts (1928-2003). They married in 1949 in Chicago, where he was pursuing a graduate degree at the University of Chicago, and divorced in 1975.

Botts wrote a garden column for Hyde Park Herald beginning in the late 1950s. In 1966, she became the paper’s editor, serving into 1969.

“Lee Botts was editor of the Herald during the late 1960s implementation of the urban renewal plans,” said Herald Chairman Bruce Sagan, who has owned the newspaper since 1953. “Her objective journalism was a crucial component of the civic discussion during that complex history.”

In 1968, she joined the staff of the Open Lands Project in Chicago. From 1971 to 1975, she was the founding executive director of the Lake Michigan Federation, which is today the Alliance for the Great Lakes. Under Botts’ leadership, the new organization persuaded Mayor Richard J. Daley to have Chicago become the first Great Lakes city to ban phosphates in laundry detergents, led U.S. advocacy for the first binational Great Lakes Water Quality Agreement in 1972, was a key advocate for the landmark federal Clean Water Act of 1972 and played a key role in persuading Congress to ban PCBs via the 1974 Toxic Chemicals Control Act.

After a short stint with the Environmental Protection Agency Region 5 office in Chicago, President Jimmy Carter appointed her to head to the Great Lakes Basin Commission in Ann Arbor, Michigan, in 1977. After the agency was eliminated from the federal budget, Botts held a research faculty appointment at Northwestern University from 1981 to 1985.

She joined the senior staff of Mayor Harold Washington in 1985, organizing the city’s first-ever Department of the Environment. In 1986, with Washington’s endorsement and support, Botts ran for the board of the Metropolitan Sanitary District of Greater Chicago but lost by 2%.

Botts relocated to Northwest Indiana in 1988, where she became an adjunct professor at a local college and joined various boards and committees. While living in Gary’s Miller Beach neighborhood, she began advocating for an idea she’d first written about a quarter-century earlier: the Indiana Dunes Environmental Learning Center, which she helped found in 1997.

For many years, Botts suggested that the modern history of the Indiana Dunes region could become an engaging documentary film. With director Patricia Wisniewski, she began working on making “Lee’s dunes film” in 2010, writing the film’s script, conducting many of the interviews, leading the fundraising effort and traveling to promote the project, even after she was no longer able to drive her own car.

“Shifting Sands: On The Path To Sustainability” was released in 2016 and won a regional Emmy Award. To date, it has been broadcast on more than 70 public-television stations, included in several major film festivals and screened by scores of local citizens’ groups and public libraries throughout the states bordering Lake Michigan.

Botts was awarded a citation from the United Nations Environmental Program for making a difference for the global environment in 1987, the 2008 Gerald I. Lamkin Award from the Society of Innovators at Purdue University Northwest and honorary doctorates from Indiana University and Calumet College of St. Joseph. She was inducted into the Indiana Conservation Hall of Fame in 2009.

She is survived by her children — Karl and Paul Botts of Chicago, Elizabeth Botts of Oak Park and Alan Botts of San Francisco — daughter-in-law Heather McCowen of Chicago and grandsons Alex and Theo Botts. Plans for a memorial service will be announced soon.