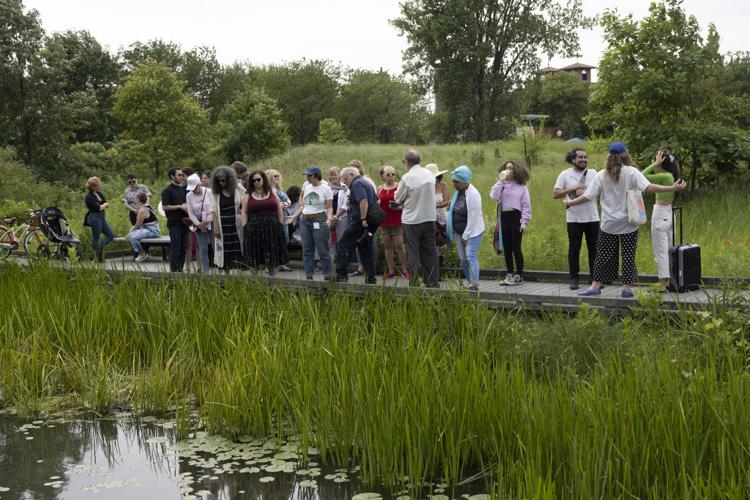 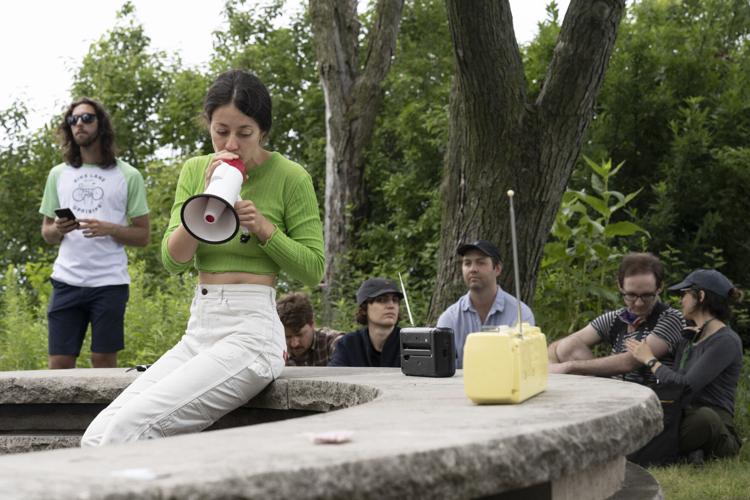 "It's amazing that there's like a space in Chicago where people can just come and visit nature," said Amal, a rising senior at Disney II Magnet High School, as she looked across a pond in the South Shore Nature Sanctuary on July 16.

That Saturday afternoon, she visited the sanctuary with her mother to participate in activities organized by the sanctuary's volunteer stewards to commemorate its 20th anniversary.

Pledging to set aside more natural areas like the sanctuary throughout the city, former Mayor Richard M. Daley dedicated the preserve on June 30, 2002. Located along the South Shore lakefront, just east of the South Shore Cultural Center, between the Cultural Center's beach and the  seventh hole of the South Shore golf course, the Sanctuary contains approximately six acres of  dunes, wetlands, prairie and woodlands, and is the home to dozens of species of trees, shrubs, grasses and wildflowers, fish, amphibians and reptiles.

Currently, the sanctuary is a focus of concern for South Side residents who oppose the proposed development of a championship-level golf course in South Shore and Jackson Parks, the so-called Tiger Woods Golf Course, as the development would destroy parts of the sanctuary (it’s worth noting that some residents are in favor of the course, so long as it doesn’t affect the sanctuary).

Among other species, the sanctuary is home to the Royal Catchfly, a scarlet-red flowered plant  listed as endangered by the State of Illinois, and milkweed, the only food source for caterpillars of the Monarch butterfly. Monarch butterflies were recently added to the International Union for Conservation of Nature endangered species Red List.

The proposed golf course, a single 18-hole championship golf course occupying the sites of the extant 9-hole South Shore and 18-hole Jackson Park Golf Courses, has been dubbed the Tiger Woods Golf Course because of the role played by Tiger Woods’s golf-course design firm, TGR Design,  in creating the plan for the course.

These schematic diagrams indicate that a substantial portion of the current footprint of the nature sanctuary would be converted to fairway or putting green, including the area at the northeastern edge of the sanctuary that has a commanding view of Chicago's skyline.

The schematic diagrams also show that after the completion of the proposed golf course, the nature sanctuary would be expanded to the north of the South Shore Cultural Center, adding more acreage than was removed.

State Senator Robert Peters (D-13), who had been on  a tour of the sanctuary with volunteer steward Susannah Ribstein, echoed what Amal had said earlier, "It's one of few places where people in the city can actually really sort of enjoy the diversity of nature…I would hope that they can figure out how to protect such a beautiful piece of land.” Noting that his engagement photos had been taken in the sanctuary, Peters continued,  "It plays an important role for the community. I want to support it."

After taking a tour with Ribstein, Yvette Moyo, a member of the South Shore Cultural Center Park Advisory Council, said,  "This is life itself. This is chlorophyll. It's green. It's flowers, everything that I love and thrive on."

"I am so in favor of them (the Park District and golf course designers) doing everything except being here, not the nature sanctuary. I am an advocate for them to connect the two golf courses, to give the youth opportunities to see ... a different view of greenery and grass and nature. And that would then perhaps calm the spirit of some youth, who don't get a chance to stop and see how beautiful our natural growth is,” Moyo said.

Then she said, "I don't have a genuine concern (about the nature sanctuary being destroyed). It is too valuable to our community, and I'm definitely a stakeholder in the community, and it's sort of like 'over my dead body.'"

More than 85 people visited the sanctuary during the celebration. They joined tours led by volunteer steward Susannah Ribstein, listened to a performance by sound artist Lia Kohl, and participated in a nature scavenger hunt. Visitors also had  their pictures taken and enjoyed cookies donated by Betty Bot Bakery, at 7100 South Shore Drive.

"It was nice to just be in that space and relax," said Amal as she reflected on listening to Kohl's performance in one of the sanctuary's council rings.

Kohl created a soundscape by actively blending and modulating sounds from several radios, sounds from a tape that she had recorded previously at the site and the sounds of her own voice amplified by a small bullhorn, with the ambient sounds of the site at the time of the performance - the wash of waves, the rustle of wind through trees, the murmur of children speaking with their parents and birdsong.

"I definitely made a structure," said Kohl describing her approach to creating the soundscape. "But I'm an improviser," she added. "So, I did, kind of, respond to what's happening."

At the end of the day’s events, Ribstein said to the Herald, "This is a rare place in the city that has had 20 years to grow and develop. And that's what I wanted to celebrate, to share the magic and importance of that."

To learn more about the sanctuary and about volunteer opportunities at the sanctuary, visit https://www.southshorenaturesanctuary.org/