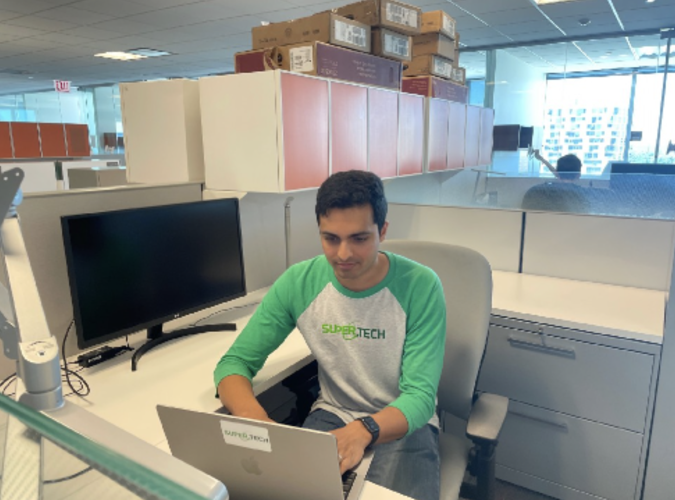 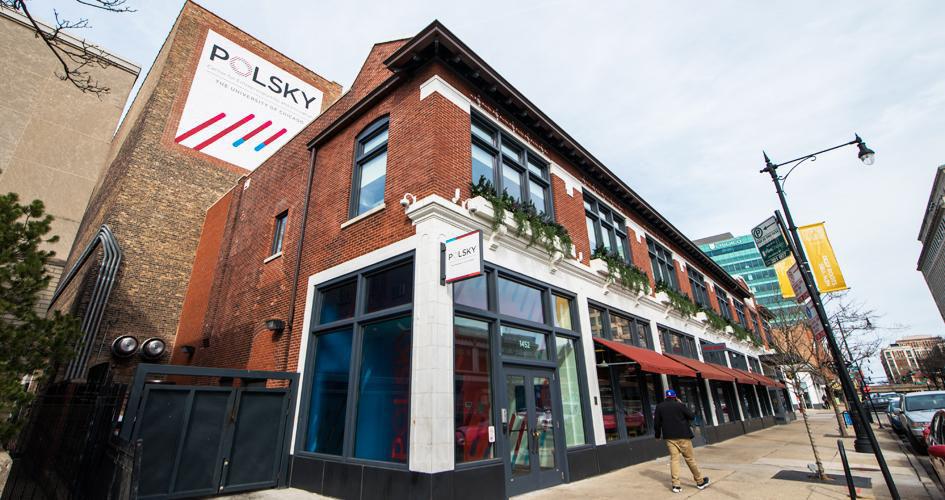 Pranav Gokhale was always “captivated” by quantum computing, a technology that stands to dramatically change data and information storage. As an inaugural member of Duality, a new Polsky Center startup accelerator dedicated to quantum science, Gokhale now touts a computer with his own quantum company logo on it.

Quantum technology, particularly in computing, is relatively recent. Instead of traditional computers, which store data on binary bits — zeroes and ones coded into data — quantum bits on an atomic scale can sometimes exist as zeroes and ones simultaneously. That makes coding dramatically more efficient at storing information. This expanded capacity has ramifications for all manner of computing, from communications to sensors.

Gokhale’s own quantum journey began in 2005, when he participated in a student internship at Innove Technologies while in grade school. Even back then, Gokhale said, students were told that “quantum is the next big thing.”

“It’s a transformative technology…There’s a whole class of problems humankind has never dreamed of solving with normal computers,” Gokhale told the Herald, almost 20 years later. “If you want to figure out how to produce a better fertilizer or how to optimize transportation networks for the subway or the CTA, those are just problems that are intractable for normal computers. Quantum computers are the first glimpse we have of potentially being able to handle these much larger problems.”

He obtained a PhD in quantum computation from the University of Chicago in 2020,  having spent three years researching what quantum computers can do for “realworld, practical applications.” With his professor Fred Chong, In 2020 Gokhale started to patent technology developed from this research, but realized it could take more than 15 years for someone to commercialize it.

And that’s where Duality comes in.

The Polsky Center for Entrepreneurship and Innovation, which was established within the U. of C’s Booth School of Business in 1998 to support student ventures and advance research, created Duality as the nation’s first startup accelerator dedicated to quantum science and technology. With more than two dozen engineers, quantum scientists and materials scientists at the U. of C.’s Pritzker School of Molecular Engineering, Duality was founded on the hopes of bridging the research from such a highly specialized engineering school with the marketplace.

After an open call, Gokhale and the rest of the inaugural cohort began in July 2021. Per the program, cohort members are given $50,000 in non-dilutive funding to develop a minimum viable product, or a beta launch.

During the year-long program, cohort members worked on their own businesses within a coworking space at 5235 S. Harper Court. Here they were given guidance on their business development from the U. of C.’s network, including a technology assessment, de-risking and instruction on how to talk to customers.

While the groups work in Hyde Park, many of the companies are based elsewhere globally.

“We’re really drawing some of the best people across the world to here,” said Preeti Chalsani, Duality’s deputy director. “It’s a global race and it’s kind of mushrooming like that. UChicago kind of got on the bandwagon earlier than most people… A benefit of that is then we’re growing our ecosystem more.”

Created in 2020, Super.tech was acquired by ColdQuanta in May of this year to further develop its quantum software platforms SuperstaQ, which allows Artificial Intelligence companies to write code in any source language and have it translate to quantum computers; and SupermarQ, which helps national governments as well as private companies like IBM decide which quantum hardware is best, with benchmarks that measure performances in finance, chemistry, energy and encryption.

Having completed the incubator this summer, Gokhale continues to work on Super.tech with ColdQuanta to further their reach and performability.

Another inaugural cohort member, Kanav Setia, used the funding for his startup company qBraid, which is creating a cloud platform to make quantum more accessible to the general public by curating informational content that teaches people to run quantum programs in under two minutes. Setia has run qBraid programs with students from local high schools through graduate schools.

“We’ve been incredibly proud that it’s even accessible to high school students,” Setia said. “If you want to make this field successful, you want a lot of brilliant people coming in, enjoying the field and (eventually) contributing to the field… Part of (our work) is that we don’t want to turn anyone away.”

Duality’s 2022 cohort is about two months in, having started in early July.

Mert Esencan, a member of this year’s cohort and newcomer to Hyde Park, is developing a project that will use quantum computing to assist financial institutions.

Esencan became interested in quantum computing during a philosophy of physics class he took his freshman year at Stanford University. The course discussed British physicist and professor David Deutcsh’s argument for the multiverse, which uses the example of quantum mechanics to suggest that it is not possible to factorize an exponential number without there being an exponential number of universes as well.

And Esencan said that got him hooked. In 2016, however, Stanford didn’t offer quantum computing courses, so Esencan and his peers formed their own society.

“It’s a great time to start a company in quantum computing…because everyday there’s something new that comes up either in theory or the hardware itself,” Esencan said. “We just have to figure out how to effectively create businesses out of them.”

Founded in May of this year, Esencan’s company Icosa Computing utilizes quantum computing and physics research to help financial institutions tackle large optimization problems. In a previous project, Esencan traded more than $1 million for an undisclosed hedge fund, and with this new product aims to "protect clients against major losses" following the summer's economic downturn.

Lisa Rooth, the co-founder and vice president of the Swedish company SCALINQ, also joined the second cohort to develop suitable solution packaging to host multi-qubit superconducting devices. Rooth and her team, which is a part of the Swedish quantum computing project the Wallenberg Centre for Quantum Technology, have figured out the tech and are now working to form the company’s customer-facing side.

“We see great value in the vast network that Duality has within the industry, and there are many opportunities we can get through accessing that network,” Rooth wrote in an email. “Quantum computing is also such a dynamic and early-stage industry…We have had great conversations and received a lot of input to help develop the company.”

Rooth said that she hopes the incubator will expand her company’s presence in both Europe and the U.S. She noted that Duality is a “very niche” program.

Duality is run by the Polsky Center and the Chicago Quantum Exchange with the support of Argonne National Laboratory, the University of Illinois Urbana-Champaign and the tech-promotion agency P33. The collaboration, Chalsani said, is an investment to “unlock the potential” of quantum technologies within the Chicago area.

“We’ve been expanding in a lot of different ways to grow our efforts in quantum information science and technologies…We’ve been investing really heavily in this area and have some wonderful scientists and researchers who have had new successes,” Chalsani said. “You really need some mechanism to bridge the gap between research and basic science.”

With no shortage of the technology’s researchers, creatives and big investors, Chalsani said, “Here in Chicago we have all of the elements.”