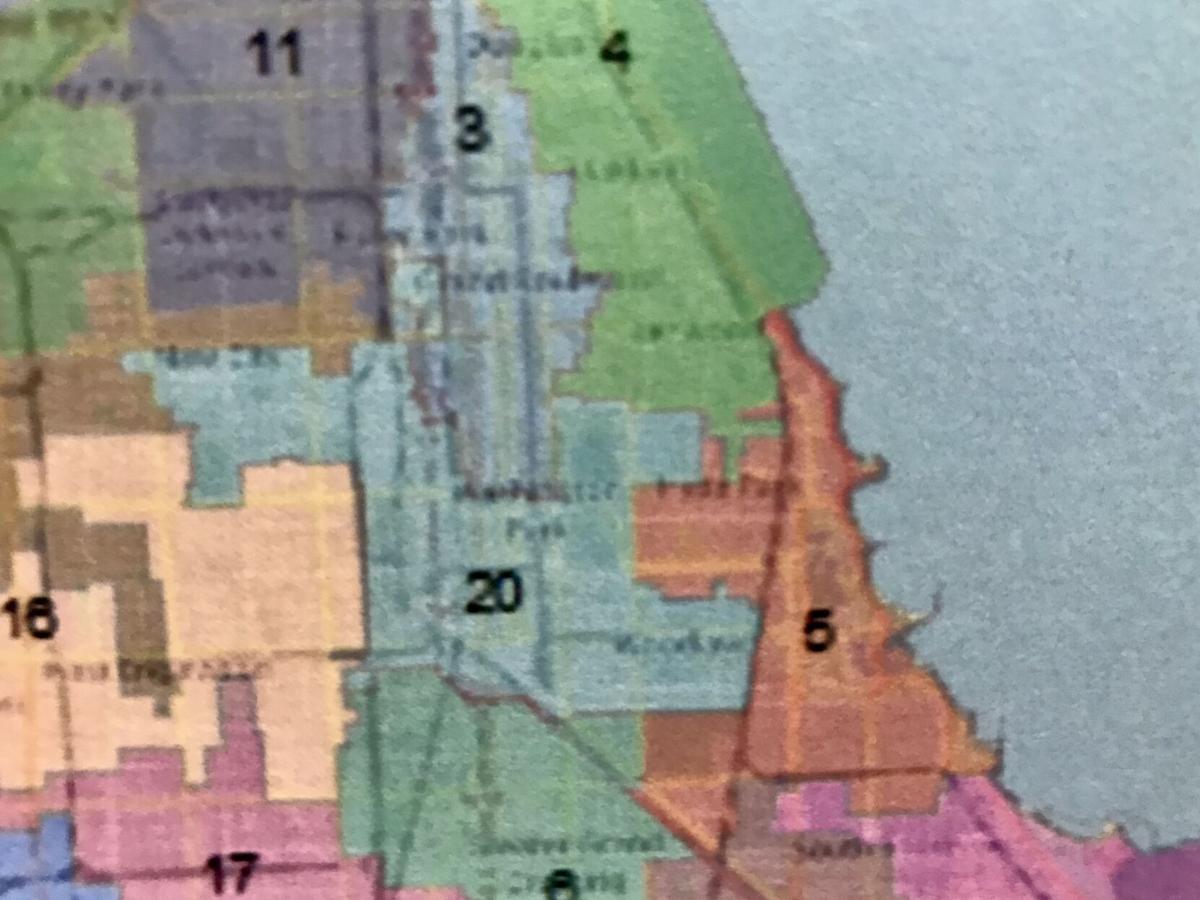 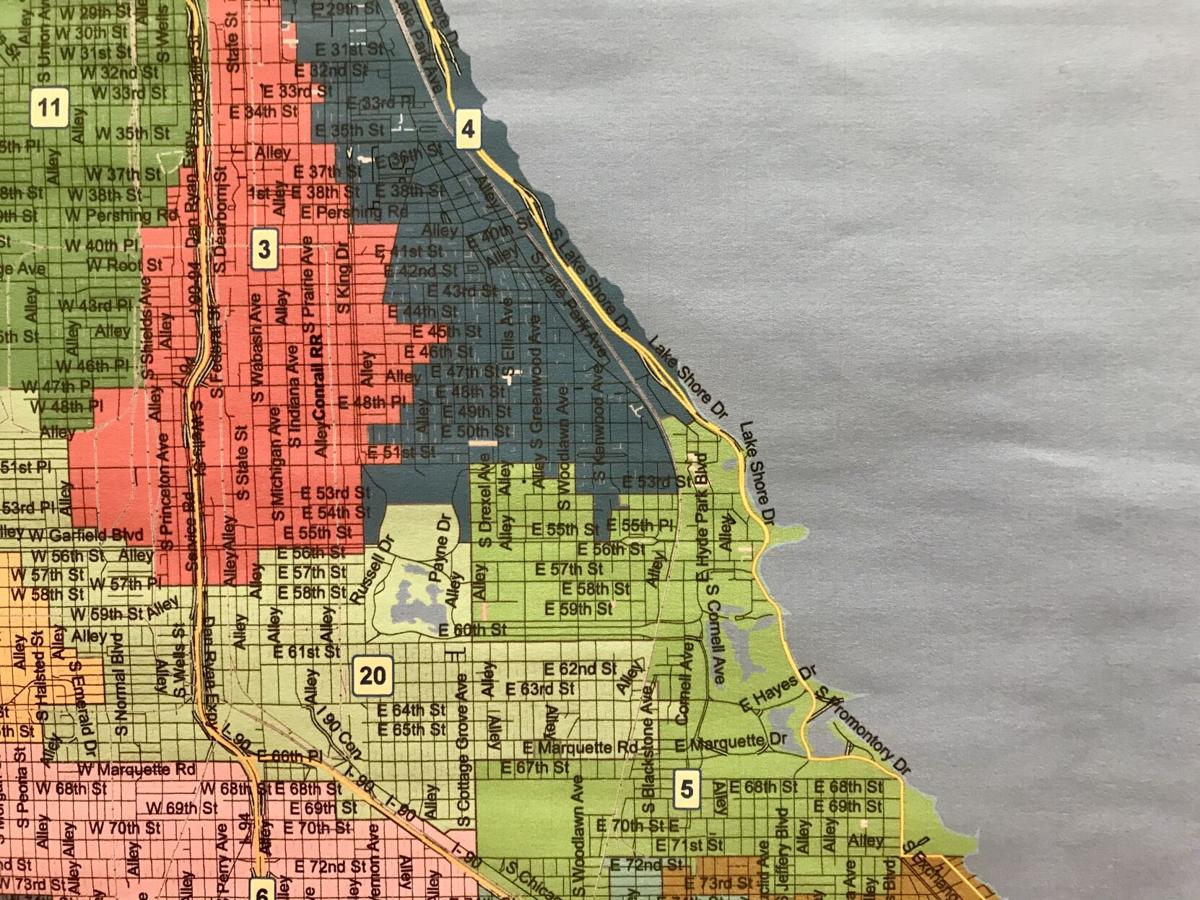 Hyde Park would be split from two into three wards under the draft ward redistricting from the City Council Rules Committee unveiled on Dec. 1, with a significant portion of northwestern Hyde Park shifting from the 5th Ward to the 20th Ward under the proposed plan.

For the first time, the 4th, 5th and 20th wards would cover Hyde Park should alderpersons pass the map and Mayor Lori Lightfoot sign it into law. That is not assured, and the Rules Committee chairwoman, Ald. Michelle Harris, said after a Dec. 1 council meeting that debate will continue.

Ward redistricting after the 2020 Census, which found that Latino Chicagoans had become the city’s second-largest racial/ethnic group and Black Chicagoans the city’s third-largest, has become fraught this year between the Black Aldermanic and Latino caucuses.

The 12-member Latino Caucus could now force a referendum at any time on its own map, as could the council’s Black alderpersons.

But for the first time, the council has a map with wards drawn before it.

The 5th Ward, traditionally Hyde Park's, would continue including all of Jackson and South Shore parks, eastern Woodlawn and northern South Shore.

"You have to count the numbers," Hairston said. "If everybody south of me doesn't have population, and the population is north, that's where they've got to come, and that's what pushes me in different directions.”

"I know in theory it sounds good to say that all the communities can stay together, but if there's not the population, they cannot," Hairston said.

Aside from the landmark change in northwestern Hyde Park, the 5th Ward's boundaries would remain largely unchanged. King said the 4th Ward is also reasonably unchanged. The 4th Ward would still have Nichols Park and part of the 53rd Street business corridor. "I used to have The Newport, and now I don't, really," she said, referring to the condominiums at 4800 S. Chicago Beach Drive.

King said the map "is a good start to preserving protected classes — Latinos, Blacks and Asians — and preserving communities." To that end, she likes it, and said she expects changes.

King observed that the South Side overall lost population from 2010-20, thus wards needed to come north "grab protected classes." She said protecting classes is a legal obligation: the Rules Committee's map has 16 majority-Black wards, 14 majority-Latino wards and a majority-Asian ward.

She also said that Latino Chicagoans' population gain was dispersed through the city, making it difficult to map a 15th ward.

King said splitting Hyde Park into three wards was not done to disenfranchise the community. "Right now, it's represented by Ald. Hairston and myself. And quite frankly, I think that it's got two strong voices in City Council because of that, and we can share resources, both intellectual, resource- and City Council-wise, to get things done for Hyde Park," she said. "I would only think that adding Ald. Taylor would increase that."

Taylor saw the full map for the first time at the Dec. 1 council and declined to say whether or not she supported it.

She had, however, seen the draft 20th Ward and the ones around it before the meeting.

The proposed 20th Ward now includes all of Washington Park, some of Bronzeville and some of Back of the Yards. it would longer include much of its former share of Englewood — done, Taylor said, to increase the population of the 16th Ward — and Greater Grand Crossing.

The 20th Ward has traditionally been Woodlawn's ward, and the new iteration would cover most of the neighborhood to the railroad viaducts. It would also include the northwestern part of Hyde Park.

Taylor said she could represent the neighborhood: "I'm an organizer, I can make relationships anywhere."

Much ado has been made over Greater Englewood having six different alderpersons over the past decade; the Englewood community area has five. In September, Taylor told The Daily Line that is too many.

On Dec. 1, Taylor told the Herald that three is not five, adding, "Every community probably needs its own alderman, but then we would have probably 100 aldermen."

"All of this is a mess, from the census on down from this," she said. "We need to come up with a process, before the next remap that includes everybody and us working together month before the due date."

"When you have a population loss, what choice do you have?" she said. "This process has been messy, and it has brought to head some ugly realities that we have."

Information from the 2020 Census about Chicago's community areas' populations was available in August. Redistricting data from the Census Bureau was released that month and in an easier-to-use format in September.

The originally published version of this article made several, erroneous mentions of northeastern Hyde Park being redrawn into the 20th Ward, rather than northwestern Hyde Park, as is shown in the map. The Herald regrets the error.

So Hyde Park contains only a little more than half a ward's worth of people but there's no way to keep it all in a single ward?