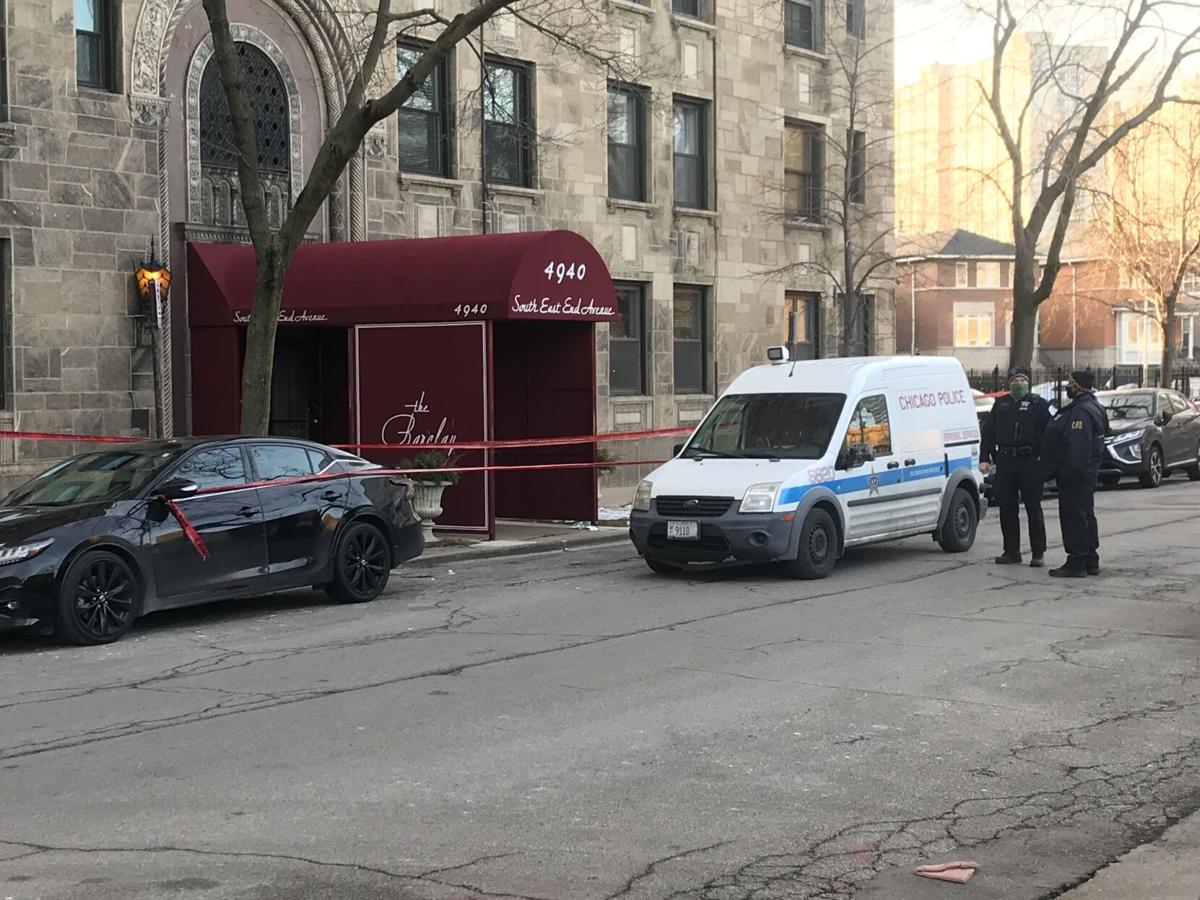 Two people were shot, one fatally, inside the Barclay Apartments building on the 4900 block of South East End Avenue in Kenwood on Saturday, Jan. 9. 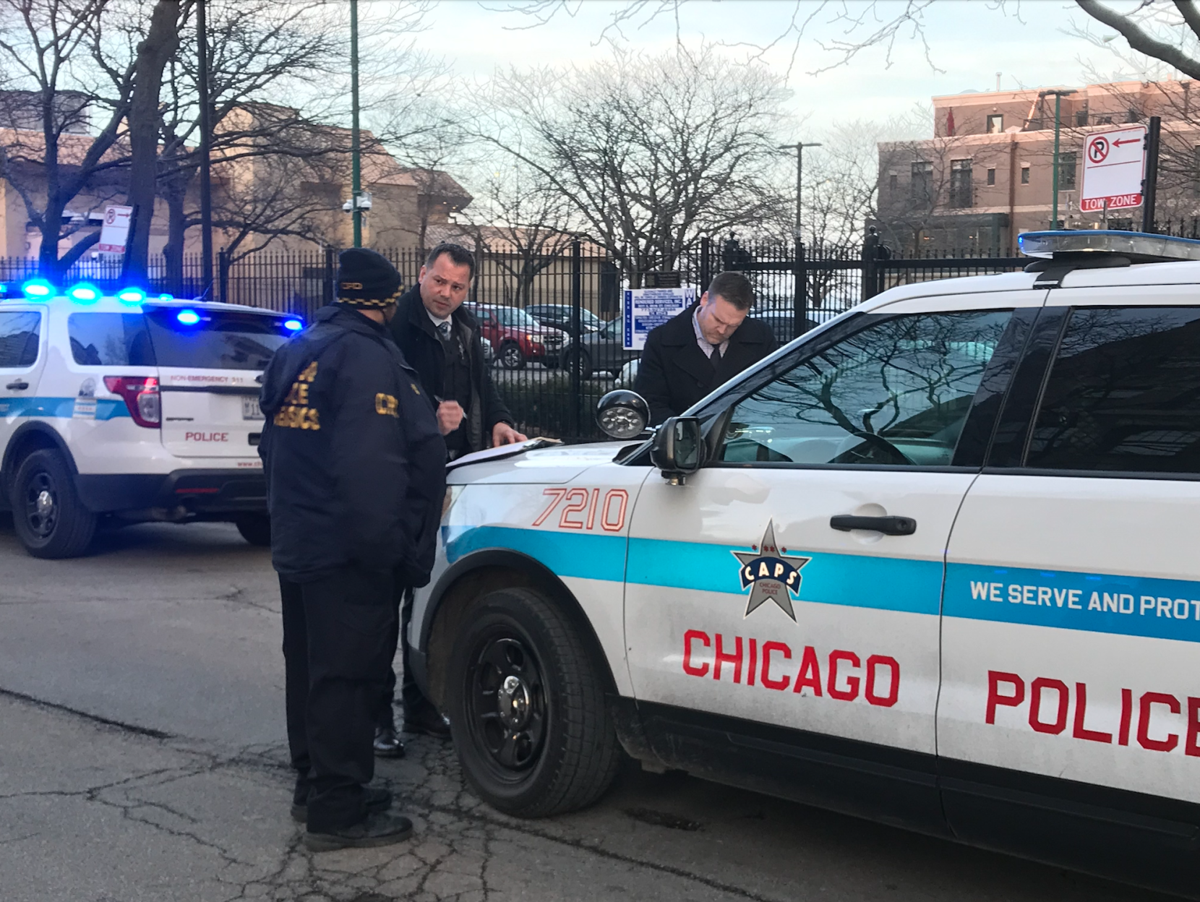 Detectives interview responding officers after a homicide on the 4900 block of South East End Avenue in Kenwood on Saturday, Jan. 9.

Two people were shot, one fatally, inside the Barclay Apartments building on the 4900 block of South East End Avenue in Kenwood on Saturday, Jan. 9.

Detectives interview responding officers after a homicide on the 4900 block of South East End Avenue in Kenwood on Saturday, Jan. 9.

This story has been updated with confirmation of the two Kenwood shooting's connection to a broader spree shooting across Chicago and Evanston. It will continue to be updated as more information comes in.

A spree shooting across Chicago and Evanston began in eastern Kenwood Saturday afternoon, where two people were killed and another woman was critically injured.

Police have identified the gunman as Jason Nightengale, 32, of Chicago, who died in a firefight with the Evanston Police after shooting a woman in the head in a restaurant in the northern suburb.

At approximately 1:50 p.m., the suspect entered the the Regents Park apartments complex parking garage, 5035 S. East End Ave., and shot a 30-year-old male victim who was sitting in his vehicle. Police found the body at approximately 5:10 p.m.

The University of Chicago has confirmed that the victim in Regents Park was a university student.

"This is deeply painful news for the university community and our South Side neighborhood," said Vice President Eric Heath and Dean Michele Rasmussen in an email announcing the news.

"The university will provide support for members of our community affected by this incident. We will have more information to share with the university community as it becomes available and once we know family members of this student have been notified."

At 2 p.m., the offender proceeded to The Barclay condominiums, 4940 S. East End Ave., entered and reportedly asked the doorwoman to use the building's phone before shooting her in the chest and another 77-year-old woman retrieving her mail in the head. The doorwoman was pronounced dead at the University of Chicago Medical Center; the second victim is in critical condition.

The shootings mark the first homicides in the Hyde Park-Kenwood area since 2018.

At approximately 2:45 p.m., the offender proceeded to a building on the 5000 of South East End Avenue — police investigators were later seen at 5000 S. East End Ave. itself — where he pulled a gun on a male victim he knew, pushed the victim into his apartment and demanded the keys to his vehicle, a red Toyota. The suspect then proceeded to a nearby parking garage, stole the vehicle and fled the scene.

The property management company for the building at 5000 S. East End Ave. told residents in a letter on Sunday that Nightengale had previously lived in the building. He gained entry to the building through the loading dock door.

Residents at the building recognized Nightengale and identified him to police yesterday afternoon, according to the company.

The suspect then proceeded to commit more shootings in Washington Heights.

"(The suspect) is wanted for two homicides from today and a robbery from today," the dispatcher on the Chicago police scanner said at 5:33 p.m. "If anyone sees him, use caution — he is on a shooting spree."

Later on Saturday evening, police in Rogers Park responded to a ShotSpotter call at Howard Street and Western Avenue, where nearby the offender entered a retail establishment in Evanston, announced a robbery and fled to a nearby restaurant, where he shot the woman and was shot by the Evanston Police and was pronounced dead at a local hospital.

Terrible local HP murder and mayhem story. There are self made videos of the deceased suspect showing his gun and making lots of threats to murder people. He looks crazy, with wild unkempt hair. I think the HP Herald should including these videos to educate the public about what kind of person does this: https://cwbchicago.com/2021/01/days-of-disturbing-facebook-posts-end-with-cross-city-shooting-spree-that-leaves-3-murdered-3-wounded-gunman-dead.html

This was terrible. But, I was pleased to learn that our Hyde Park/Kenwood community reportedly hadn't had a homicide since 2018. We should spread the word that our HP community is one of the safest communities in Chicago. Let's also use this fact to support local CPD and University of Chicago Police who have done a good job of policing our neighborhood and prevent terrible violent crimes like shooting sprees.