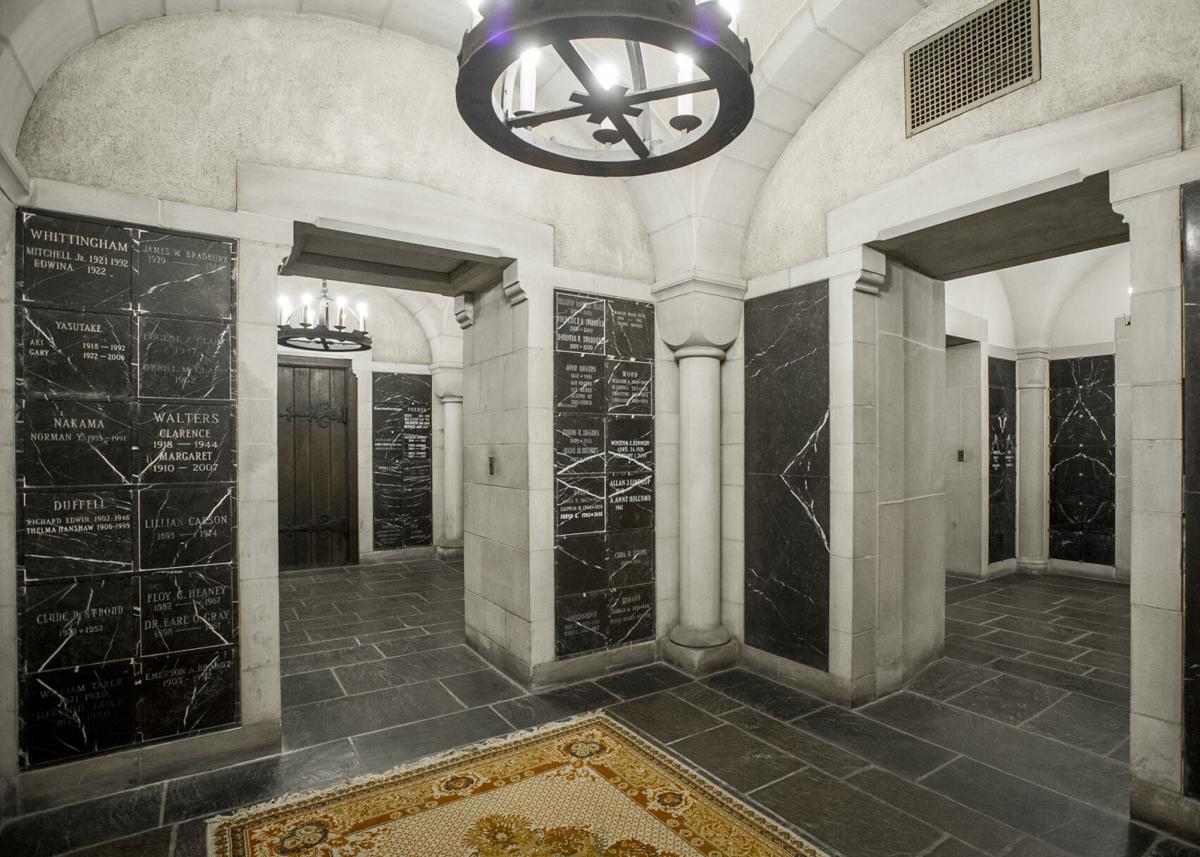 The crypt at the First Unitarian Church of Chicago, 5650 S. Woodlawn Ave. 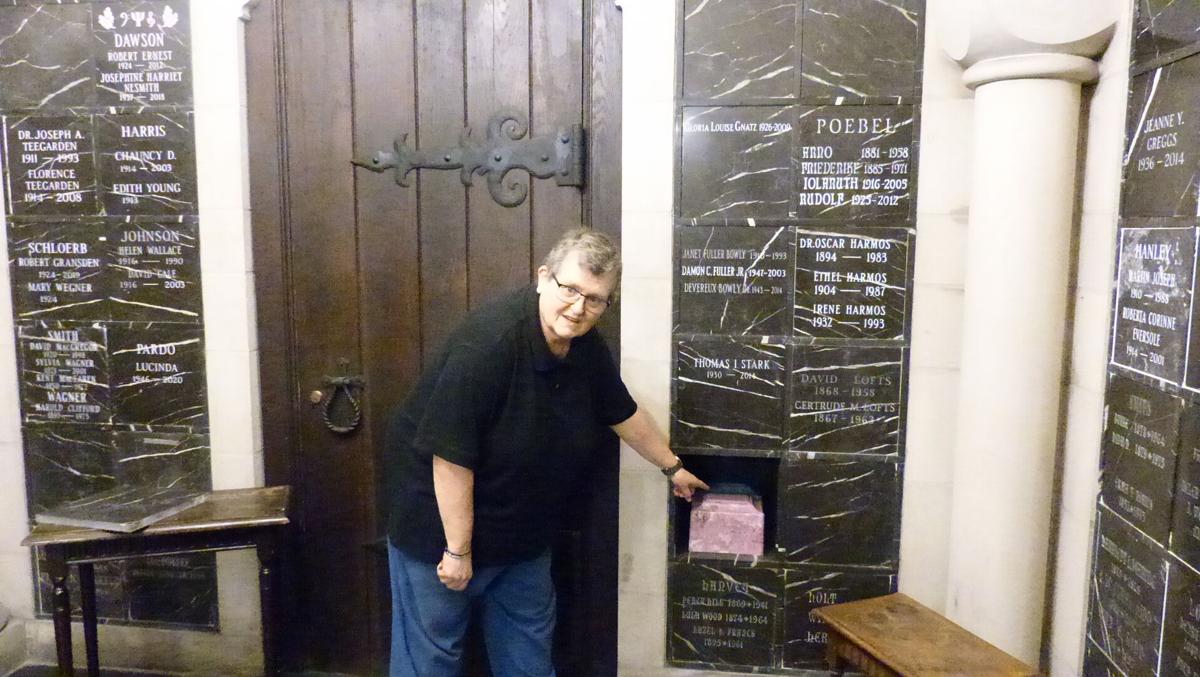 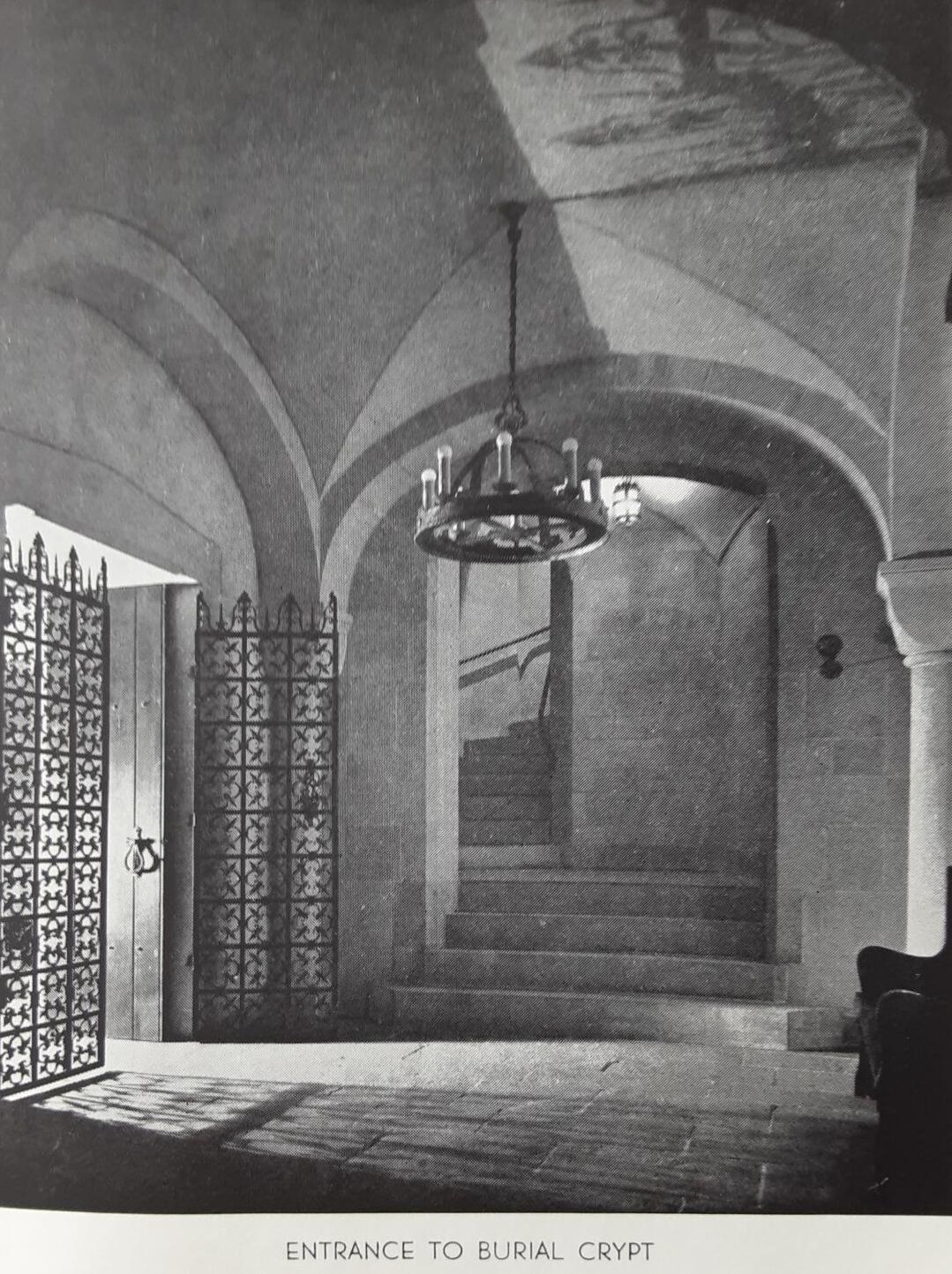 A photo of the crypt entrance taken at the 1931 dedication for the First Unitarian Church building.

The crypt of the First Unitarian Church of Chicago, 5650 S. Woodlawn Ave., lies at the bottom of a spiral staircase behind the church pews, to the right of a small and serene chapel. Each of the crypt’s four rooms, called bays, has three walls of niches 11 to 18 inches deep containing space for 4 to 6 urns.

Enclosing each niche are black marble panels engraved with family names; the typefaces, carved in different eras, bear the marks of modernization, with the earliest style being a Gothic, Germanic font, the next, a less ornate, serif font, and the last, a sharp, thinner typeface.

A great variety of people are interred here: a Greek scholar and architect, a Church secretary and neighborhood guide, a State Representative, an atomic scientist, a young singer murdered by gangs, the founder of a children’s choir, the founder of a local suicide hotline, and a mysterious set of remains labeled AP, whom no one has been able to identify.

Some of the people here were affiliated with the University of Chicago, but many were not — the crypt was built, as crypt tour guide and church historian Joan Pederson told The Herald, “to be a sacred place where people from the whole community could be linked to one another.”

The crypt was opened to the public in 1931, shortly after the completion of the newly renovated, half-a-million dollar church. The Church’s lead preacher at the time, Dr. Von Ogden Vogt, believed in crypts as a solution to problems associated with overpopulation, telling the Herald in March of that year, “It is fast becoming recognized that cremation and burial crypts are the only solution of the burial problem here in the great city. Chicago will, before many years have passed, house five million people, and imagine then what the burial problem will be if we must continue to depend upon the ordinary cemetery.”

According to a 1964 Hyde Park Herald obituary for Dr. Vogt, the crypt was the first public cinerarium anywhere in the United States.

Devoted church member and five term republican Representative Morton Denison Hull had funded the construction of the current church as well as the crypt, with his son, the architect and Greek Denison Bingham Hull, designing much of the building.  Morton is interred beside his wife Katherine, marked with stones in the center of one of the burial walls.

The church was rebuilt anew beginning in 1929, having relocated from Washington and Dearborn, the current location of The Picasso statue, and the crypt was expanded, following some tussling within the Chicago Zoning Commission in 1964.

Having joined the Church in 1971, Pederson had personal connections with many of those interred here, and many more anecdotes about people she didn't know personally. It is a place rife with pleasant and painful memories. For a moment Pederson teared up, noticing a fresh niche for someone she had known, who had recently passed.

“Fooey, every time I come in here, I see a fresh stone for somebody I didn’t know was gonna be in here,” she said.

Pederson carried around a thick stack of notecards with handwritten notes about the history of the crypt and the people inside it, a thorough record which she read from with excitement and authority.

After recounting First Unitarian history, Pederson discussed Selina and George Reed, a social advocate and scientist respectively, both interred here. Selina had worked for the United Cherokee Nation and the Illinois Children’s home, and later went on to organize a suicide hotline after the Church organist took his life in 1978.

According to Pederson, it was likely the first such effort in the city, and was based off of similar organizations Selena had encountered on her travels in Europe. Pederson herself recalled volunteering with the group in an adjacent property, where “volunteers operated the phone lines throughout the night.”

“We rapidly found that you can be interested in this kind of work, but being able to take calls like that all night long is a skill that some people have but most people do not,” she said.

Selina’s husband George was a prominent scientist, one of a small number of Black people who worked for what was later revealed to be the Manhattan project. He also contributed research on the composition of lunar materials.

Pederson said, “His work was so vital for understanding lunar geochemistry, that the Reed family still has a moon rock in their home, the one George got to keep, rather than return to researchers.”

First Unitarian had been integrated by the time that Selina and George Reed, both Black, had joined. The first Black woman, Pauline Daly McCoo, joined the church in 1948. She is interred in an adjoining room.

McCoo, said Pederson, had originally come to First Unitarian to teach art classes for children, and joined the congregation shortly thereafter. Pederson had nominated McCoo for the Unsung Unitarian Universalist Award in 1998, which McCoo then won in ‘99.

In her nomination letter, Pederson describes how McCoo opened up her home to youth involved with the Church: “In a time when the Greyhound was the principal mode of transportation for UU (Universalist Unitarian) youth, when your youth conference got out so late that the next available bus was hours later, there was a place in Hyde Park-Kenwood…where you’d be welcome, where there was probably supper to be had, even a ride to the depot at Clark and Lake late at night or early in the morning…”

Aki Yasutake, who is interred in the crypt alongside her husband Gary Yasutake, was another social anchor here.

She had come to Chicago after having been forced into a Japanese internment camp during World War II. Pederson recalled how the couple had kept the US government issued posters demanding that they vacate their homes.

“Going into their home, and seeing the posters was the first I had heard of internment,” said Pederson. “The posters told them to gather the small amount of belongings they had been allotted. Decades later there was a symbolic restitution, but it was only a fraction of what they were owed.”

After her children had grown up, Aki worked as an office assistant within the church, where, according to Pederson, she helped generations of Japanese people, especially women, incorporate into the Hyde Park community.

Pederson said, “She was willing to be a second mother, show people the ropes, help them find familiar food, find other friends, hook into a social network beyond the academic one.

“So many Japanese women had gotten to know her that when a friend of mine went to Japan, and someone mentioned that she was from Chicago, a Japanese person said, ‘Oh you’re from Chicago? Do you know Aki Yasutake?!’”

One of the most significant community functions that the church played, not only in Hyde Park, but in the whole city of Chicago, was to serve as the original home for the Chicago Children’s Choir.

It was founded in 1956 by a former minister, Christopher Moore, also interred in the crypt. Pederson said, “It was a simple, ordinary, run of the mill junior choir at first. But he came with what he knew and within three or four years he had gotten it to the point of being able to perform with the Lyric Opera and the Chicago Symphony.” The Chicago Children’s Choir now serves several thousand children throughout Chicago.

Pederson sang in the choir as a teenager and knew Virgil White, who was also a singer and leader within the choir. He was mentioned, according to Peterson, in a Chicago Tribune Magazine profile of the Choir and their trip to the World’s Fair Expo of 1967, in Montreal. He was then murdered in his attempt to keep two gangs, one of which had attempted to recruit him, from claiming his block kas territory. His niche displays a sadly foreshortened life. Pederson recalled him, in the choir, as a quiet and charismatic leader.

Pederson has led various tours and children’s groups through the crypt, showing children the Gothic, creaking iron gate at the entranceway, reminding them that this is, nonetheless, not a ghost yard. Her devotion in life and in memories to those interred here is manifest in her archival work — she sent the Herald numerous newspaper clippings and obituaries about the many members of the Church and its associated organizations.

After having participated in choir activities for many years, Pederson joined the church as a student at the University of Chicago, finding at the time that Augustana, where she had previously belonged, did not reflect the racial diversity of the neighborhood.

In 1979, on the occasion of the church’s 50th anniversary, a pamphlet was circulated within the congregation explaining the history of the building — a source that piqued Pedersons’ interest in church history. Other sources contributed to her knowledge, Pederson said: “Reverend Christopher Moore, who ran the Chicago Children’s choir, was a grand storyteller. I heard a lot of things about the story of people and the congregation. He would talk with anybody about anything.”

“The church is where my closest relationships outside my family are,” she added.

Pederson continued, “I learned more about the crypt because the people I knew upstairs (in the church sanctuary) died and went down here. People taking my tours sometimes knew family members in the crypt whom I knew nothing about

“I’ve been asked to write an update to the church’s history, but I have no gift for writing public-facing things. I recount stories out loud.”