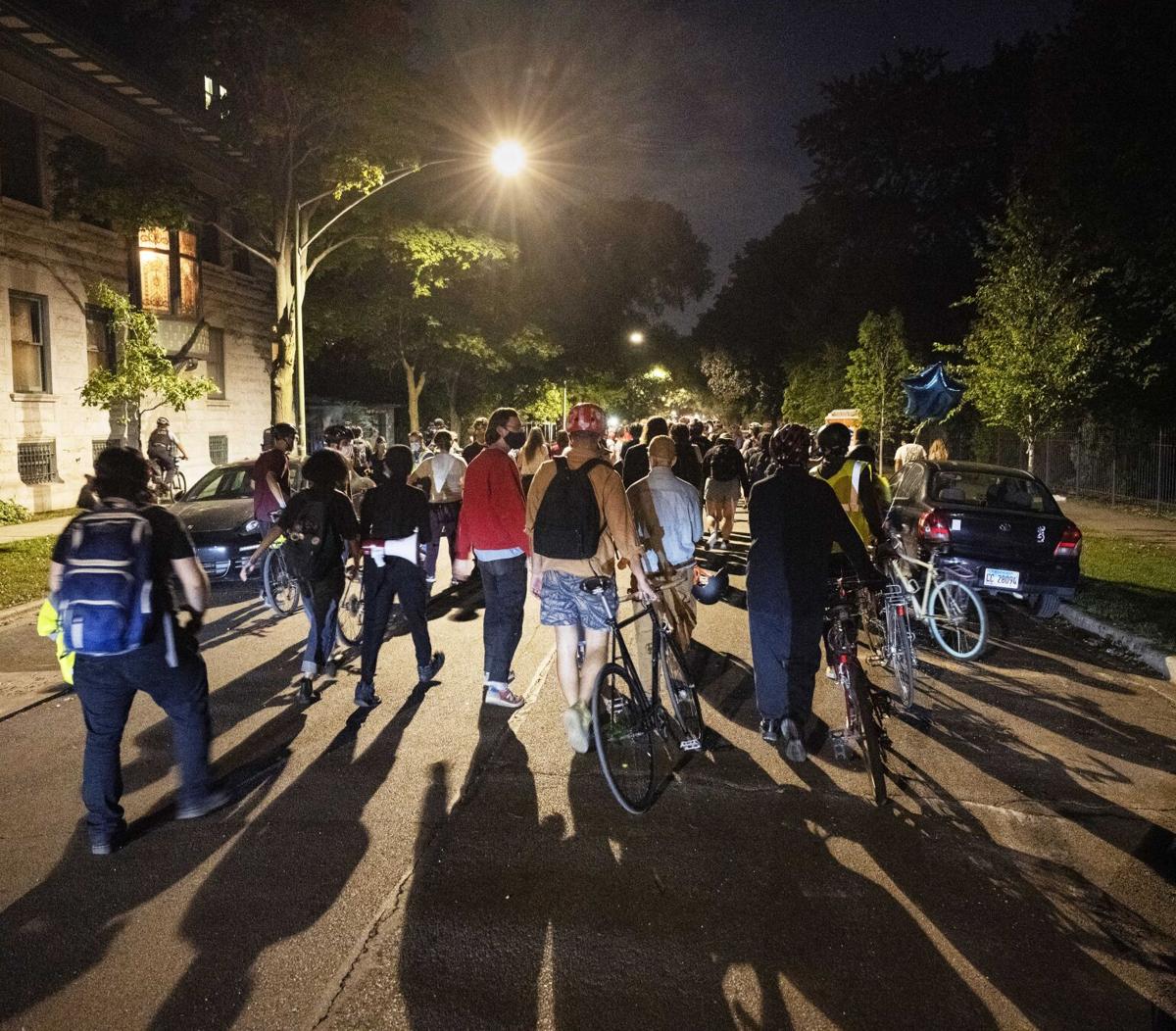 Demonstrators walk away from Provost Lee's house and toward UCPD headquarters. 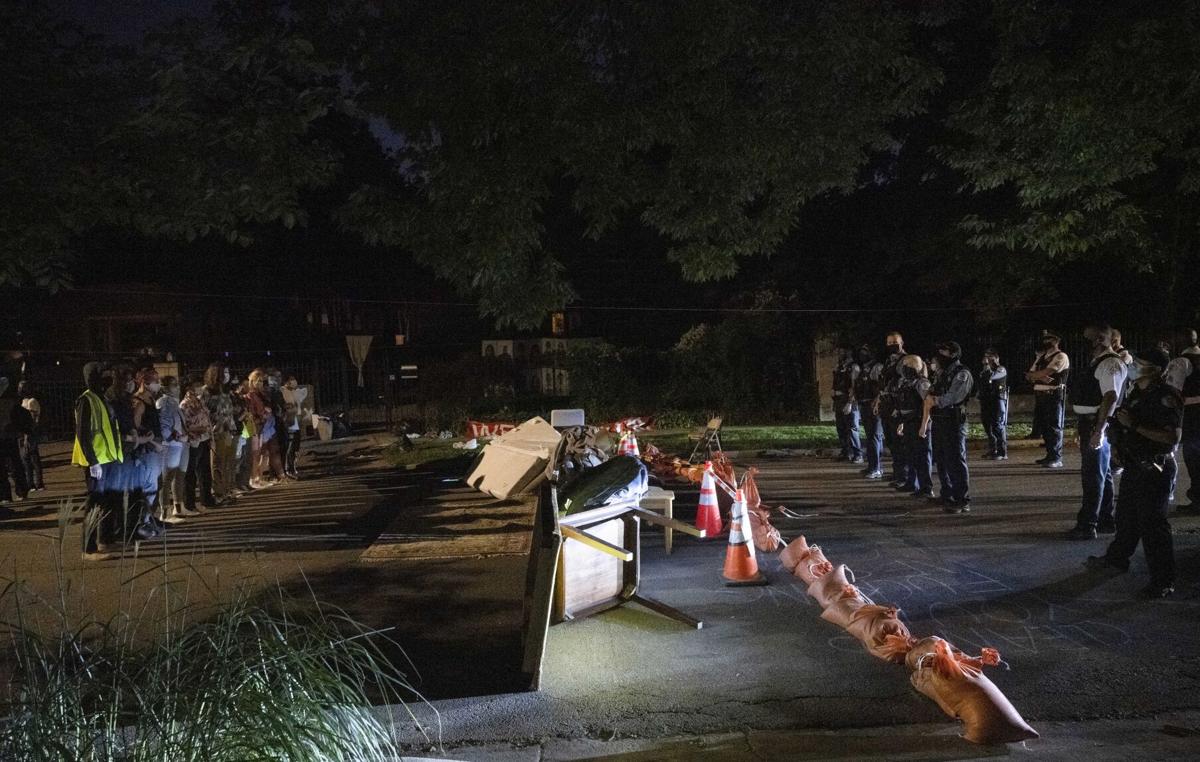 Protesters and police face off in the street in front of Provost Lee's home.

Demonstrators walk away from Provost Lee's house and toward UCPD headquarters.

Protesters and police face off in the street in front of Provost Lee's home.

Student protesters ended their occupation in front of University of Chicago Provost Ka Yee Lee’s house on the 4900 block of S. Greenwood Avenue Friday evening after a final confrontation with Chicago police.

About 20 people with student group Care Not Cops had been camped out in front of the property since last Saturday, saying that they would remain until the university agreed to a public meeting around their demands to abolish the University of Chicago Police Department (UCPD), establish cultural centers for students of color, and improve the school’s ethnic studies program.

On Friday, Lee sent another letter to the group reiterating an offer of a private meeting, part of a series of “stakeholder engagement sessions” to get input on the UCPD.

“Yours is one of a number of perspectives we intend to engage, and we look forward to moving forward with you and other community members in this important dialogue,” Lee wrote.

In a response that afternoon, Care Not Cops said on social media that they were “rescinding” their own offer of a public meeting with Lee.

“Admin has shown they are not won over by strong arguments or convincing proposals in Levi Hall,” the group wrote. “Now it is our job to build the power that makes the administration not just hear us, but ACT — power that makes them implement demands to fund communities.”

Beginning at 8 p.m. Friday evening, protesters at the occupation put on a “block party.” Almost immediately, Chicago police — who had engaged protesters several times over the course of the week, including in a “raid” early Thursday morning — issued dispersal orders to the crowd, and threatened those in attendance with arrest.

In response, protesters erected barricades with traffic cones, furniture, and orange sandbags. Behind it, they linked arms to form a chain. After Care Not Cops live-streamed the encounter, the crowd swelled to about 80 people.

Once police removed the barricades, protesters moved southward until they were at the intersection of 50th Street and Greenwood Avenue. An unsteady stand-off ensued, with the crowd of protesters moving back and forth, shifting between the southern intersection and the site of the original occupation.

After an hour of ebb and flow, protest leaders declared that the group would march to UCPD headquarters, 850 E. 61st St., where Care Not Cops had held an overnight sit-in earlier this summer. They walked west on 50th Street, flanked by a handful of bicycle police.

As they left the occupation site, city workers from the Department of Streets and Sanitation began loading objects from the encampment into a pickup truck. By the end of the evening, all that remained of the occupation was a pile of traffic cones and sandbags from the dismantled barricade.

At Drexel Avenue, the march turned south until protesters reached 55th Street, where they formed a circle at the Ellis Avenue intersection.

“Not only did we show power, but we built community,” said Alicia Hurtado, an organizer with Care Not Cops, from the center of the circle. “All week, we kept each other safe. You know who we had to keep us safe from? The police!”

Continuing south along Ellis, the group marched through the U. of C. campus. Four CPD cars, blue lights flashing, made up the rearguard.

At UCPD headquarters, the group of around 40 people circled up again around the entrance to the building.

“To President Robert Zimmer, to Provost Ka Yee Lee, to UCPD Chief Kenton Rainey, to the Board of Trustees, to every UChicago administrator — see you in the fall!”

After making the statement, most of the demonstrators left, although a few milled about for a while longer before dispersing.

"“Yours is one of a number of perspectives we intend to engage, and we look forward to moving forward with you and other community members in this important dialogue,” Lee wrote.

I respond: OK, M'thinks our new U of C Provost isn't being honest. M'thinks she and most of us who grew up and now live in Hyde Park would like to "engage" these spoiled brat protesters, rioters with a leather belt on their as***** :-)

No, you did not show power. You showed that you are entitled jerks who have no consideration for the people that live on the block you trashed.