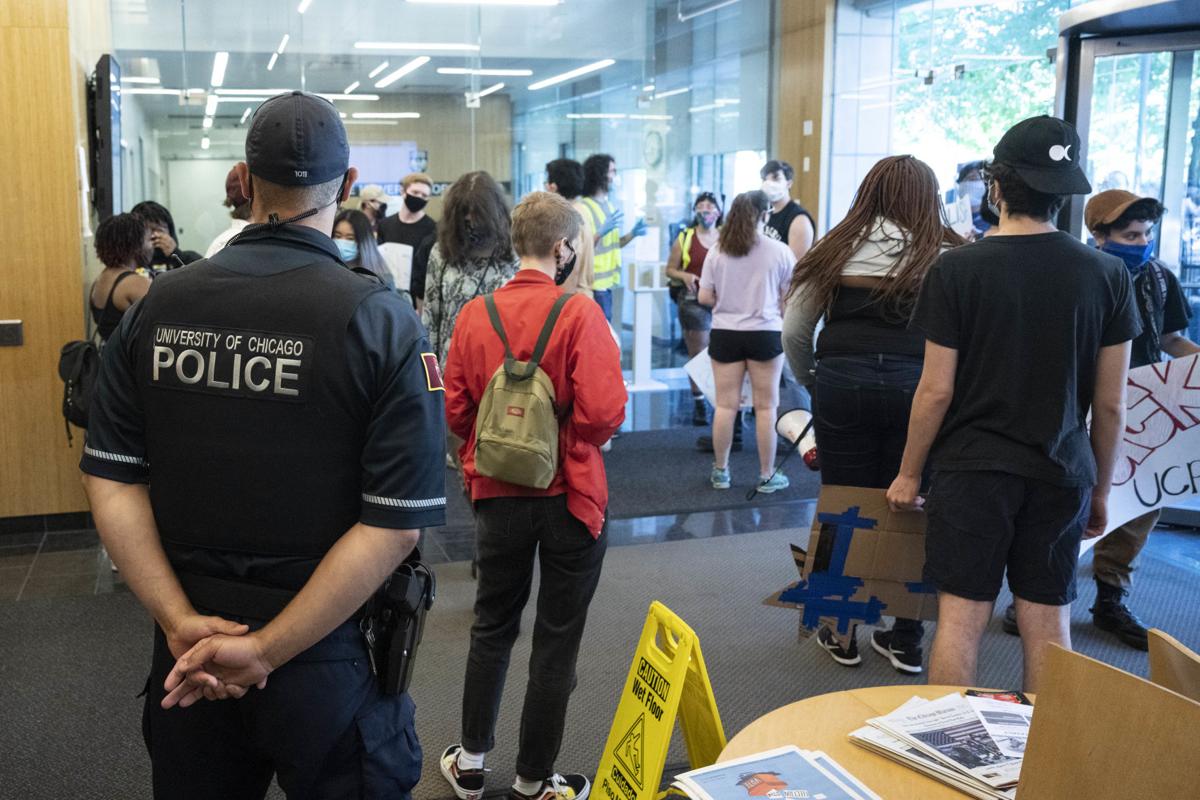 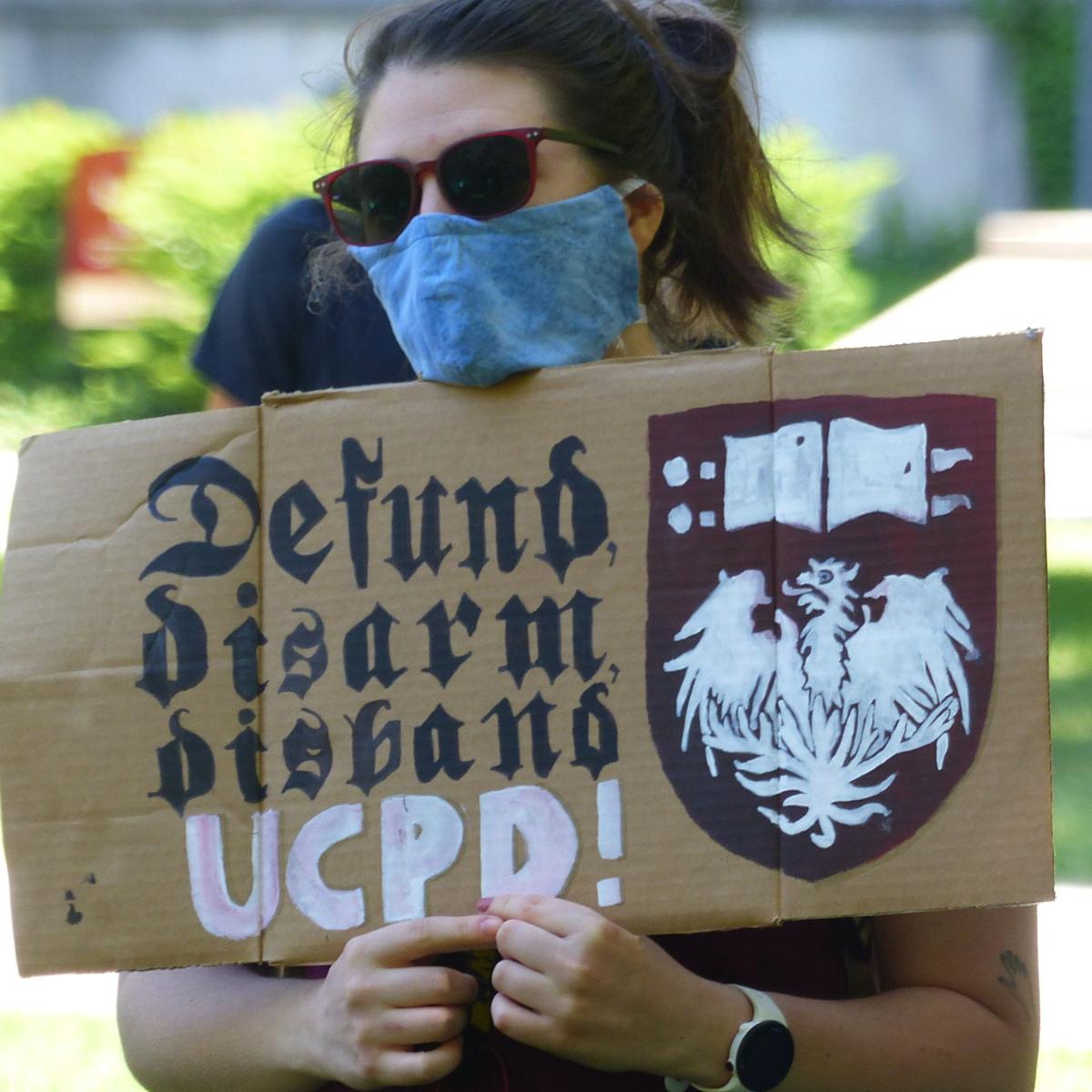 Emily Kurett, a doctoral student in the Anthropology Department, displays a sign calling for Defunding, Disarming & Disbanding of the University of Chicago Police force. 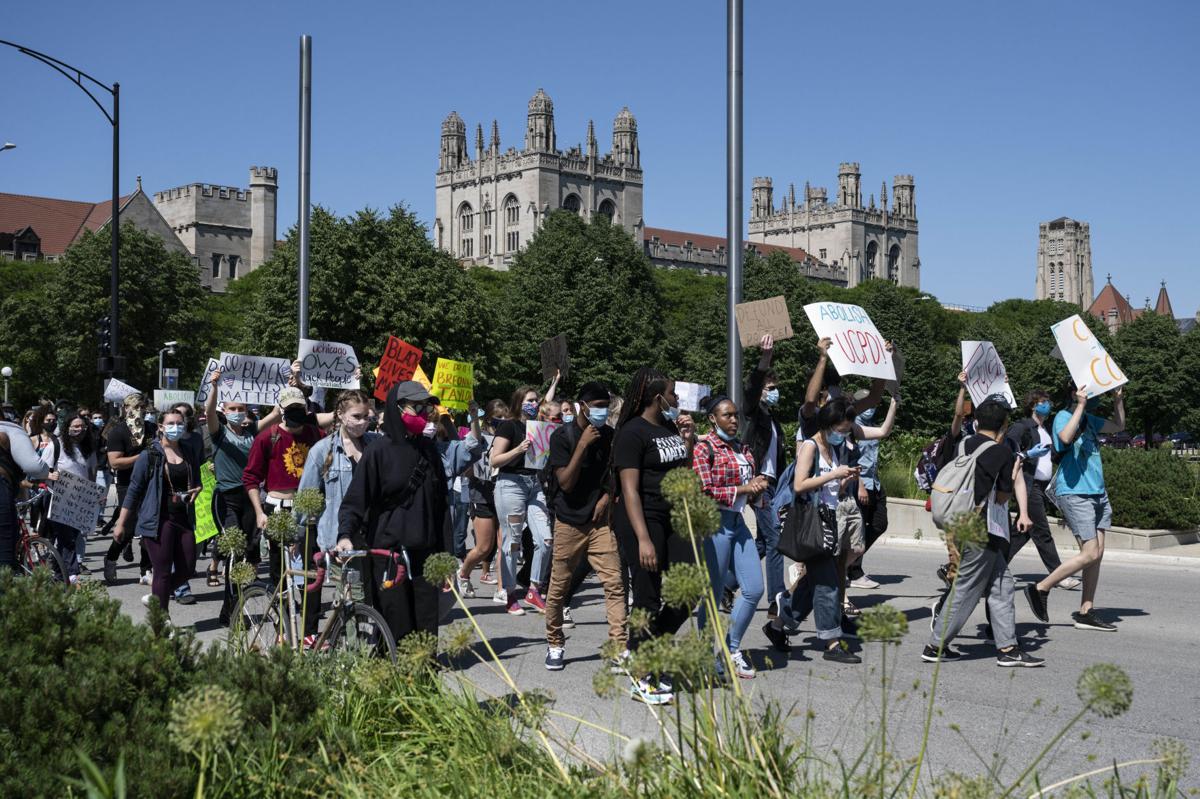 About 125 people march across the Midway from the UC Main Quad to the UChicago Police Department.

Emily Kurett, a doctoral student in the Anthropology Department, displays a sign calling for Defunding, Disarming & Disbanding of the University of Chicago Police force.

About 125 people march across the Midway from the UC Main Quad to the UChicago Police Department.

Around 125 University of Chicago students protested against the University of Chicago Police Department (UCPD) at its headquarters at 61st Street and Drexel Avenue on Friday afternoon, continuing constant protest activity in the aftermath of the killing of George Floyd by Minneapolis police.

A similar number of science, technology, engineering and math researchers and students had demonstrated on campus Thursday against systematic racism in STEM fields. University students also played a role in organizing the May 31 protest that culminated in arrests at 53rd Street and Lake Park Avenue.

Livia Miller, a sophomore and spokeswoman for UChicago Student Action, which organized the Friday protest with #CareNotCops and Students Working Against Prisons, traced the organizing against the UCPD to the department's 2018 shooting of Soji Thomas, a Black U. of C. student who was experiencing a mental health episode and destroying property with a pipe.

"He had tried to get student counseling services, and they turned him away," Miller said. "The history of the University of Chicago Police Department has revolved around making the campus a place that is hostile to people who live on the South Side, hostile to community members.

"And as we're seeing right now across the country, the way that police forces have been used to systematically target some people is just not working anymore, and I think abolition starts on our own campus.

"As a bubble, this could be a better world. This could be a microcosm of the world we want to live in, instead of a reflection of the same troubling, racist policies we see elsewhere."

Miller said the groups want to see the UCPC defunded, disarmed and disbanded.

"We're asking the university of disclose the policing budget for the past 20 years and moving forward," she explained, calling for lower funding going forward. They want officers disarmed of guns and non-lethal weapons and an ultimate plan to disband the department by 2022, replaced with "investment in genuine care — student counseling, services that genuinely make this community more inclusive and more safe for everyone, not just an illusion of safety that excludes some people."

"All of these things were previously not on the table," she said. "Now they're happening. Hopefully the increased investment in student counseling services will mean they're leaning towards care instead of a police model for safety and security."

They all locked their doors before they left for the protest. These fools are trampling on everyone’s rights for protection and enforcement of the laws. They have no idea their harm they’re doing.. I am completely ashamed of them ...and I apologize for them to the police.