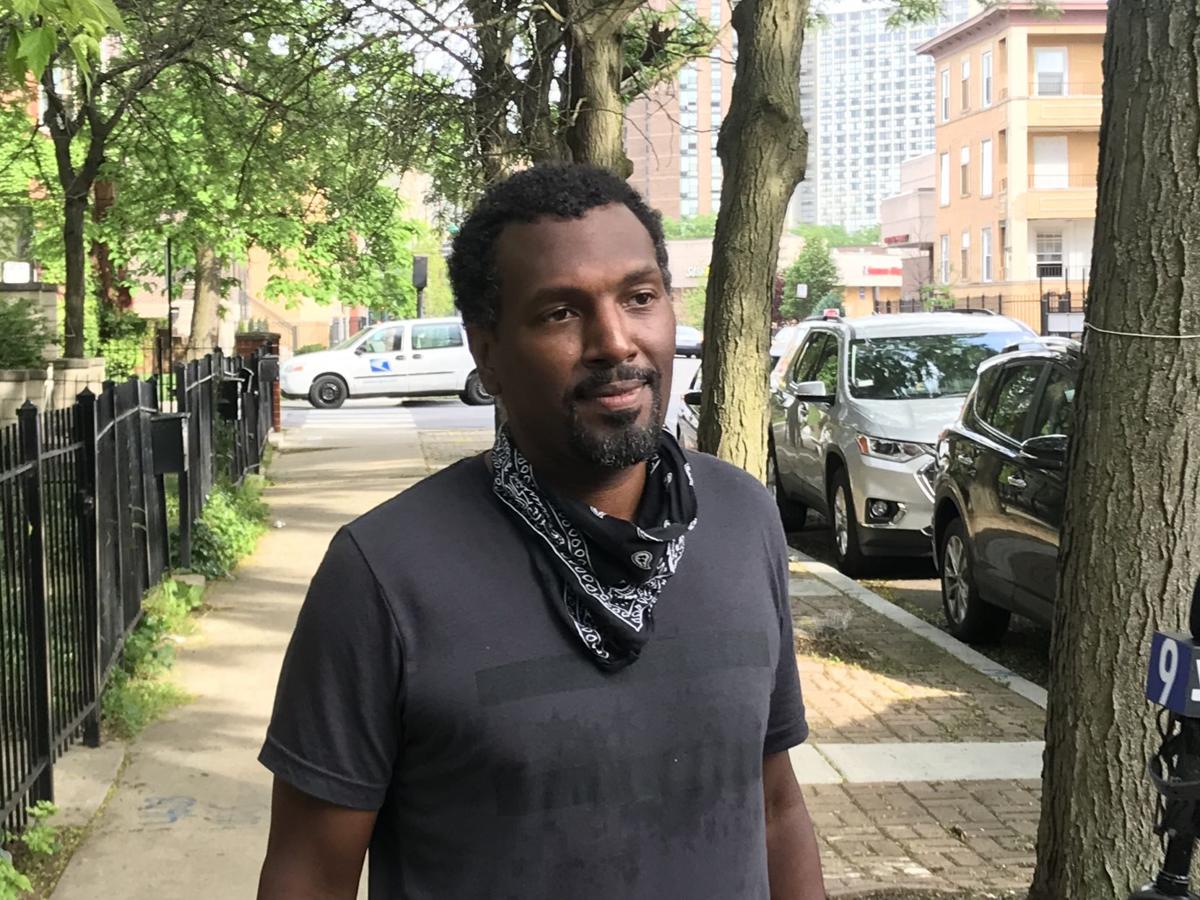 Chicago Police Board President Ghian Foreman speaks to reports near his home in North Kenwood, June 5 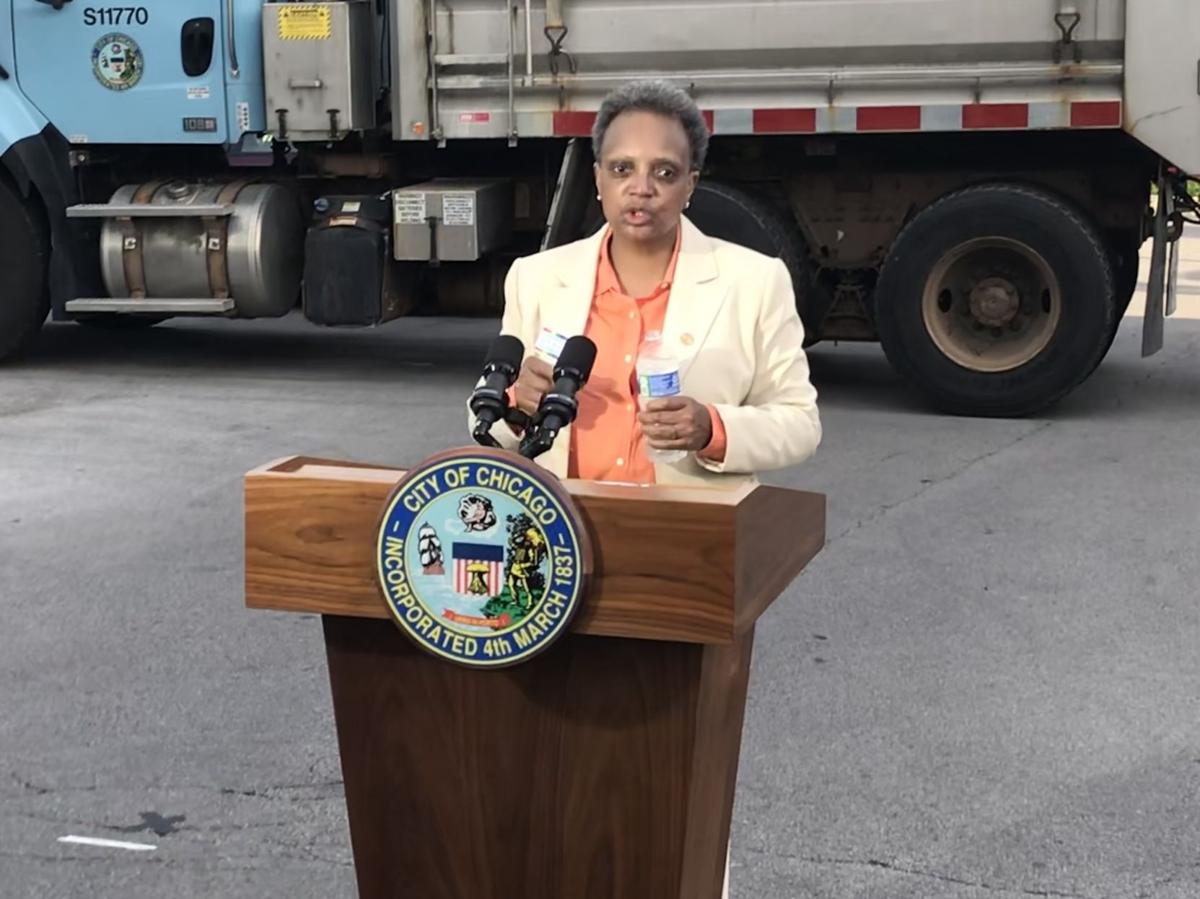 A police officer struck Police Board President Ghian Foreman in the legs with a baton as he was a bystander to a May 31 protest march at 53rd Street and Lake Park Avenue that turned violent.

In a June 5 statement, Foreman, who lives in North Kenwood, said he was coincidentally at the protest when it became confrontational and noted the irony "that someone in a public-facing position could also become a victim of police aggression."

"This is the duality I live with as a Black man in America, even one who is privileged to be part of systems of power. I am not exempt from what any other Black man faces on the streets," he continued. "There is important work to be done: if we are to improve police officer training, better educate them on de-escalation techniques and develop a peer support program in the next 90 days as we have been asked to do, we cannot afford to lose focus now."

In her June 2 State of the City address, Mayor Lori Lightfoot said she would implement new community-led training for police officers, a real officer wellness program, crisis intervention and procedural justice training for all officers and a new recruit program on community-police relations.

The episode occurred the day after Foreman, who was Lightfoot's vice president when she led the Police Board, had defended the police response to riots in the Loop that preceded the unrest and looting spreading out to surrounding Chicago neighborhoods.

“There was a lot of professionalism displayed yesterday," he said at a press conference before the Hyde Park protest. “I would not have had the same restraint that many of the officers had yesterday.”

In a June 5 interview, Foreman said police reform needs to include the department, the community, nonprofits and businesses. He said the episode "is a great training opportunity."

"Everyone in the ecosystem," he said. "We all have to be part of the conversation. I got an opportunity to see things from a neutral perspective, personally looking at it from both sides, and it was a no-win situation. And so it gave me a different perspective in terms of some of the things that we need to do."

"I think we all have to work on improving ourselves," he said when asked what specific reforms he would recommend for the Chicago Police Department, though he agreed that a policy emphasizing deescalation and police-civilian communication would be appropriate. He praised Lightfoot, Gov. J.B. Pritzker, Atty. Gen. Kwame Raoul and State's Atty. Kim Foxx and said reform will cause more change than bricks.

Nevertheless, "Until we all figure out how to love ourselves and love our neighbors, it doesn't matter what we write on paper," he said.

Lightfoot addressed the incident at her Friday afternoon press conference, urging victims of police misconduct to call 3-1-1 and complain to an ad hoc Civilian Office of Police Accountability (COPA) task force. She said Foreman had done so after she asked him..

From May 29 through 7 a.m. Friday morning, the Tribune reports that there were 344 complaints made against police officers. On a Monday conference call with reporters, Police Supt. Brown reportedly said the Chicago Police Department arrested 2,655 people for civil unrest and disorderly conduct since May 29, with 788 arrests for looting and 529 guns recovered.

Asked what policy changes she would support to protect peaceful protesters and bystanders from police misconduct, Lightfoot said, "The Chicago Police Department has a stack of general orders, special orders and other orders that are around the size of two New York City phonebooks."

"The issue isn't the policies," she continued. "The issue is making sure the officers follow their training and that the supervision is clear about what is authorized and what is not. It's in the execution, is where we've seen the lapses, so we have to make sure that the supervision is clear and is tight. And as I said before, this is not a situation that we're just going to be looking to line officers."

Lightfoot asked where the supervisors were as the misconduct occurred, calling officers' supervision critical and recalling that it is their job to ensure "no lines are crossed."

"I will make sure that I get answers, and if there's a problem with supervision, that those officers were held accountable," she said.

Second District Cmdr. Joshua Wallace, in attendance at the press conference, looked on as she said this and had no comment after it concluded.

"I worked in the police department," Lightfoot recalled. "I know police officers. I've spent a lot of time with them, and I'm tough about police reform and accountability. But I also know in my heart that the vast majority of officers want to and are doing their job the right way."

I would think that under the circumstances, Mr. Foreman would be on the other side, shoulder to shoulder with the Chicago police.

No wonder “things are the way they are “in Chicago.

Do you allow the word “hogwash “in your comment section? Because that’s what this is.