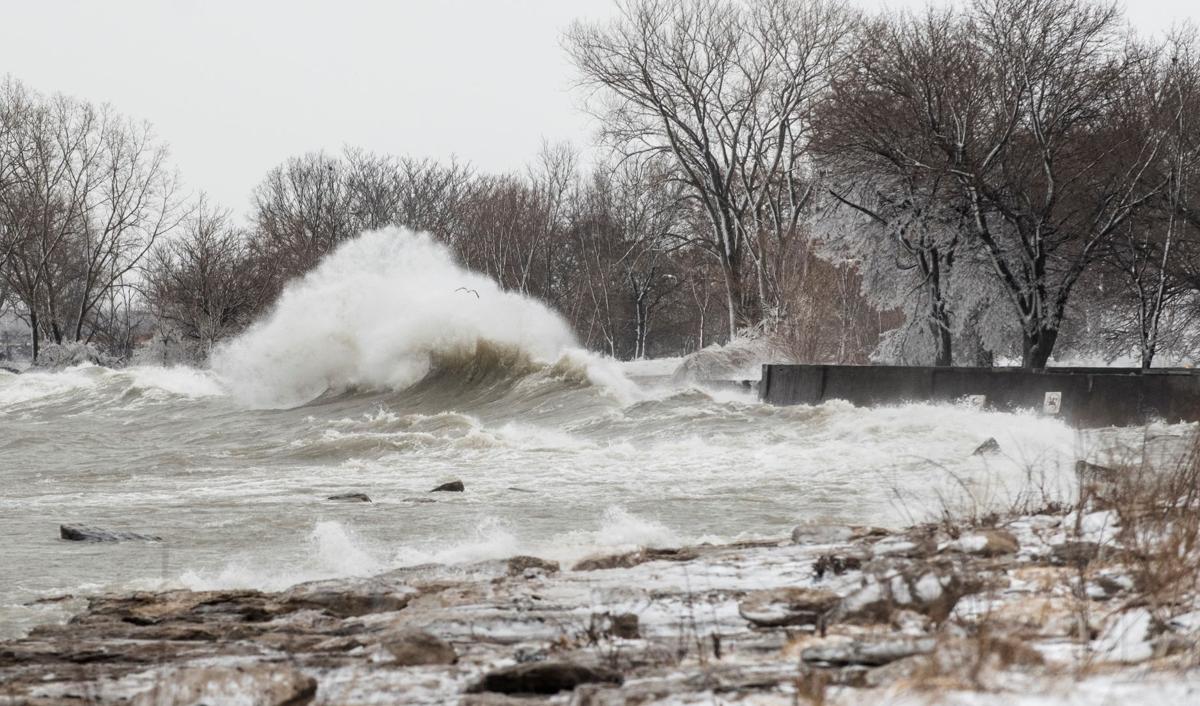 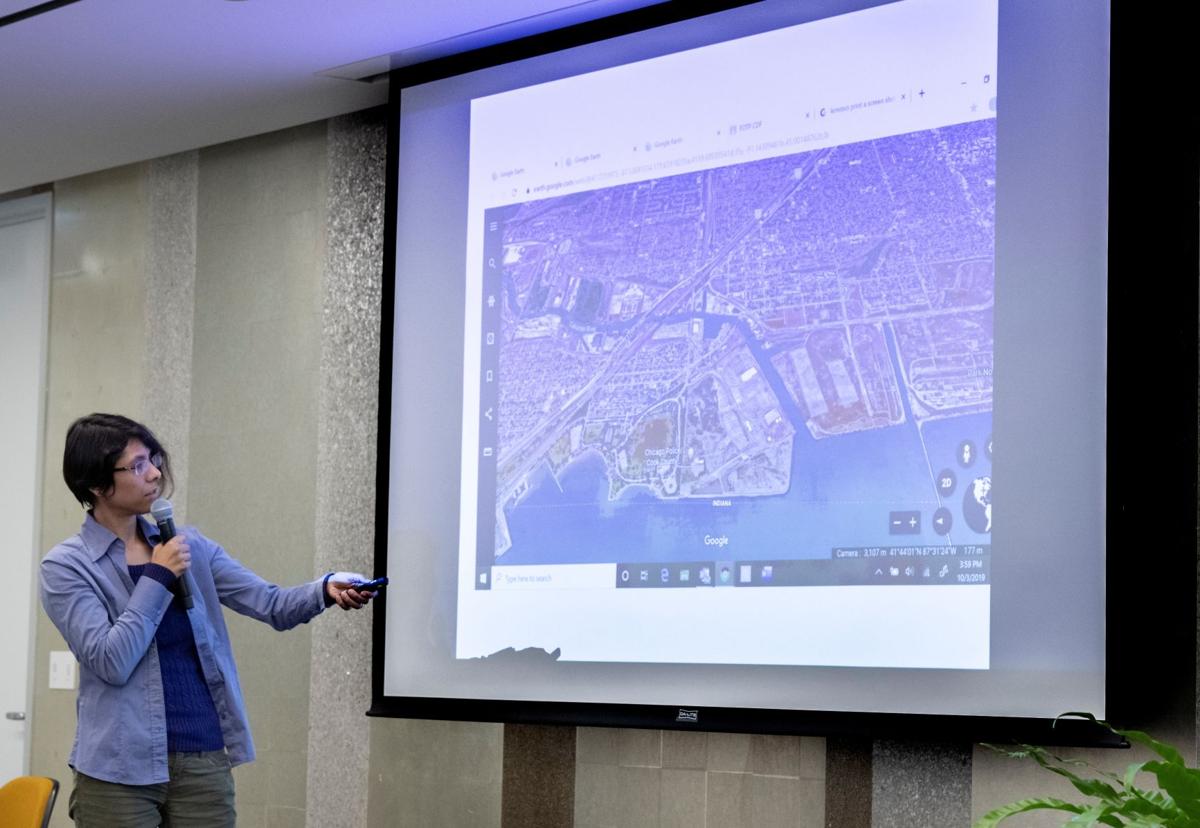 The U.S. Army Corps of Engineers predicts Lake Michigan levels are to exceed monthly records through the summer, with June’s total possibly exceeding the 1986 record level by as much as 12 inches, according to Corps charts shown by climate fellow Ted Haffner during the Friends of the Parks’ (FOTP) quarterly Netsch Lecture.

The lecture, “Our Eroding Lakefront & The Last 4 Miles,” brought together Haffner, Patricia Sharkey, environmental lawyer and board member of Friends of the Park, and Amalia NietoGomez, executive director of the Alliance of the Southeast.

The lecture audience at IDEA Studio, 111 E. Wacker Dr., listened to the trio’s presentations and discussion that focused on two projects proposed for the southeast lakeshore of Chicago: the vertical expansion of the existing Confined Disposal Facility (DCF) for dredged sediment, located at the mouth of Calumet Harbor, and the South Works Project development, proposed for the approximately 450 acres of brown fields on the site of the defunct South Works US Steel plant south of Rainbow Beach Park.

The speakers covered topics such as environmental justice, community health, water quality, lake levels, climate change and the civil engineering needs of the City and region.

Haffner started his presentation with a review of climate-change predictions for Illinois.

“Rainfall will increase, with variability. Summer and fall will typically be drier; winter and spring will typically be wetter,” said Haffner. He predicted that “2-, 5-, 10-, 25-, 50- and 100-year storm events will be more intense,” meaning greater amounts of rainfall will fall during those events.

Such predictions are particularly important to civil engineers as they plan future storm water systems that need to be able to handle the volumes of rainwater predicted by the climate change models.

“Earlier it was thought that Illinois would become sort of like Houston,” said Haffner. “More recent studies, depending on which (green-house gas) emission scenario is used, result in climates more like southwestern Ohio (using a low-emission scenario) or northeastern Kansas (using a high-emission scenario).”

The Army Corps lake level predictions presented by Haffner do not include data from greenhouse gas emission climate models. The predictions are made using current measured lake levels and then extrapolating forward to future lake levels using past recorded monthly and seasonal changes in lake levels.

Sharkey discussed the Army Corps of Engineers’ proposal to vertically expand the existing Confined Disposal Facility (CDF) at the mouth of Calumet Harbor to accommodate an additional 20 years of dredged materials from the Chicago Area Water System (CAWS).

The original CDF, which was developed in 1984, after approval by the Illinois General Assembly under the Rivers and Harbors Act, was “supposed to close after 10 years,” said Sharkey. Before 1984, dredged sediment from CAWS was dumped offshore in Lake Michigan, but the material was found to be “too contaminated” for open water dumping, so the original CDF was developed.

Sharkey expressed concerns that rising lake levels and increased storm intensities would allow the erosion of the mound of dredged sediment put in the proposed expanded CDF. This sediment could then wash back into the lake, potentially contaminating the region’s source of drinking water.

The ACE environmental impact statement issued in April of 2019 states that the outer layers of the vertically expanded CDF will be built with “clean Calumet Harbor sediment” to “safely confine” dredged material that is “not suitable for open water placement or beneficial use,” thus implying the mitigation of some of the concerns Sharkey expressed.

NietoGomez focused on the environmental burdens carried by the people of the area. According to data NietoGomez presented, these burdens include the proximity of homes to hazardous waste sites, high levels of pollutants in the air of the Southeast Side, and higher rates of cancer deaths of people living in the area compared with people living in many other parts of Chicago.

NietoGomez said: “So they (the ACOE) gave us a list of 7 sites and said, ‘pick one, pick the site you want.’

“We presented 8,500 petitions against having another toxic landfill in our area.

“So, the US Army Corps of Engineers came back and said, ‘Well, if we can’t put it in a separate site, we’ll expand it (the current CDF) up.’”

“We have enough toxins in our area already,” Gomez added.

NietoGomez then discussed the development of the South Works brownfield site and the expansion of a proposal put forth for a community benefits agreement (CBA) by the Coalition for a South Works CBA, to include the CDF development in the agreement. The proposed community area in the CBA includes the Hyde Park, Woodlawn and South Shore neighborhoods.

The next Netsch lecture, scheduled for May, will be a presentation by the Obama Foundation.

The time has come to find another site. Piling this material ever higher is not the answer. Where were the lake levels at, when this facility was first planned? This seems like more shabby treatment for South siders. Next door to this CDF lies Calumet Park.

I'd like to know what they do with dredged material from the North side, like Belmont, or Montrose harbors.

I am looking forward to the next lecture. When, where will it take place? Is registration required? I understand the sponsor is Friends of the Parks.