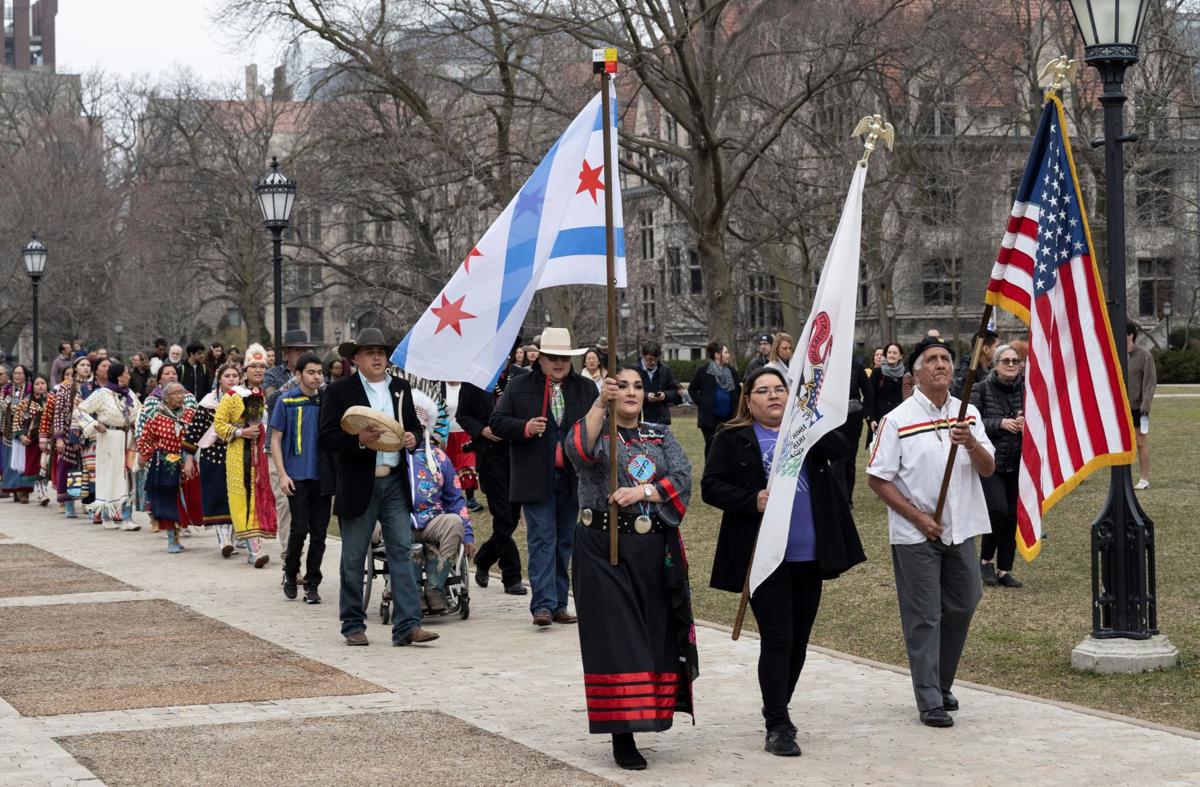 A group of 50 or so Apsáalooke (Crow), led by Chicago’s American Indian Center honor guard, march through the University of Chicago’s central quadrangle on March 12. 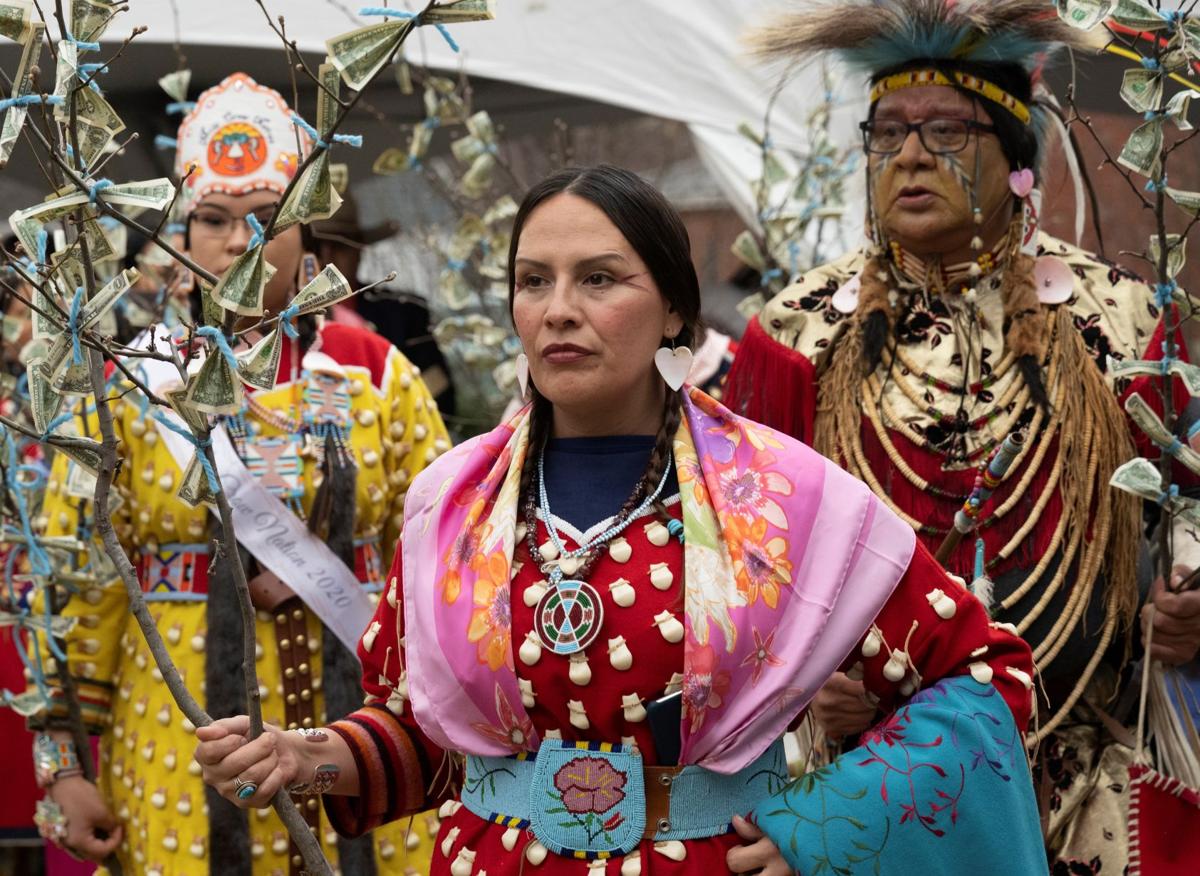 Apsáalooke scholar Nina Sanders is joined by Shawn Real Bird and his daughter Aspen Real Bird, as they dance in the garden of the Neubauer Collegium.

A group of 50 or so Apsáalooke (Crow), led by Chicago’s American Indian Center honor guard, march through the University of Chicago’s central quadrangle on March 12.

Apsáalooke scholar Nina Sanders is joined by Shawn Real Bird and his daughter Aspen Real Bird, as they dance in the garden of the Neubauer Collegium.

A group of 50 or so Apsáalooke in full Crow regalia led by Chicago’s American Indian Center honor guard marched to the steady beat of drums as they moved east across the University of Chicago’s central quadrangle on March 12.

The group sang as it marched. Spectators watched quietly, took photos, and listened. At University Avenue the marchers were joined by a man and several women on horseback.

“When we moved from camp to camp, from one area to the next area, we put on our best clothes, our best outfits, our best beadwork,” said Shawn Real Bird of Crow Agency, Montana as he described the meaning behind the ceremonial march.

“It symbolizes in going to that next encampment that it is going to be prosperous in game, in water, in wood. So that the whole village, the whole tribe will prosper and flourish in that area,” said Real Bird. “And so, we brought that tradition and that culture to Chicago.”

The tradition and culture were brought to Chicago to mark the opening of “Apsáalooke Women and Warriors,” an exhibit curated by Apsáalooke scholar Nina Sanders, with the support of other members of the Crow Reservation in Montana, and in collaboration with Neubauer Collegium curator Diteer Roelstraete.

The exhibit is a three-part curatorial project: A large collection of art, contemporary and traditional artifacts at the Field Museum; a smaller collection of materials and art at the Neubauer Collegium; and a catalogue of the exhibition, published by the Neubauer.

The gallery in the Neubauer is a space reconfigured and “reimagined as a tipi’s sheltering interior.” It is a social space; rugs lie on the floor; it has a sofa. Contemporary weavings and historical objects hang on the tipi’s walls. It is a “womb-like space,” said Sanders, where “the womb contains the art which has maintained the culture.”

“It’s a really big accomplishment for us as Crow people and her (Sanders), to represent all of us and to do an excellent job and showcase at one of the most prestigious museums here, in Chicago and also the United States,” said Real Bird during a ceremony following the march.

“She has coup as a warrior lady, with her education in anthropology, with her knowledge from the Crow language,” continued Real Bird as he praised Sanders.

Following Real Bird’s remarks, Sanders gave gifts during a Giveaway Ceremony to the people who had helped create the exhibition.

As people were called to Sanders to receive their gift, National Endowment for the Arts (NEA) National Heritage Fellow Grant Bulltail, who is a Pipe Carrier in the Apsáalooke’s Sacred Tobacco Society, sang her an honor song. Bulltail had travelled to Chicago from Montana to be at the opening of the exhibit and to sing the honor song.

“We can’t sing our own praises,” said Sanders following the reception. “For him (Bulltail) to sing this is the highest form of well-wishing.”

“We all have a gift to give. We are responsible in sharing with other human beings,” said Sanders as she discussed the exhibit. “I am just trying to illuminate how miraculous it is that we (the Apsáalooke) managed to exist through smallpox, cholera, Spanish flu, the reservations.”

“Apsáalooke Women and Warriors,” will be at the Neubauer Collegium through August 21, 2020 and at the Field Museum through April 4, 2021.

the celebration of your culture.

We have a great holiday in October

called Columbus Day come celebrate with us too.

I am so happy when different cultures can share the holidays and both celebrate with each other and be happy for each other’s success.