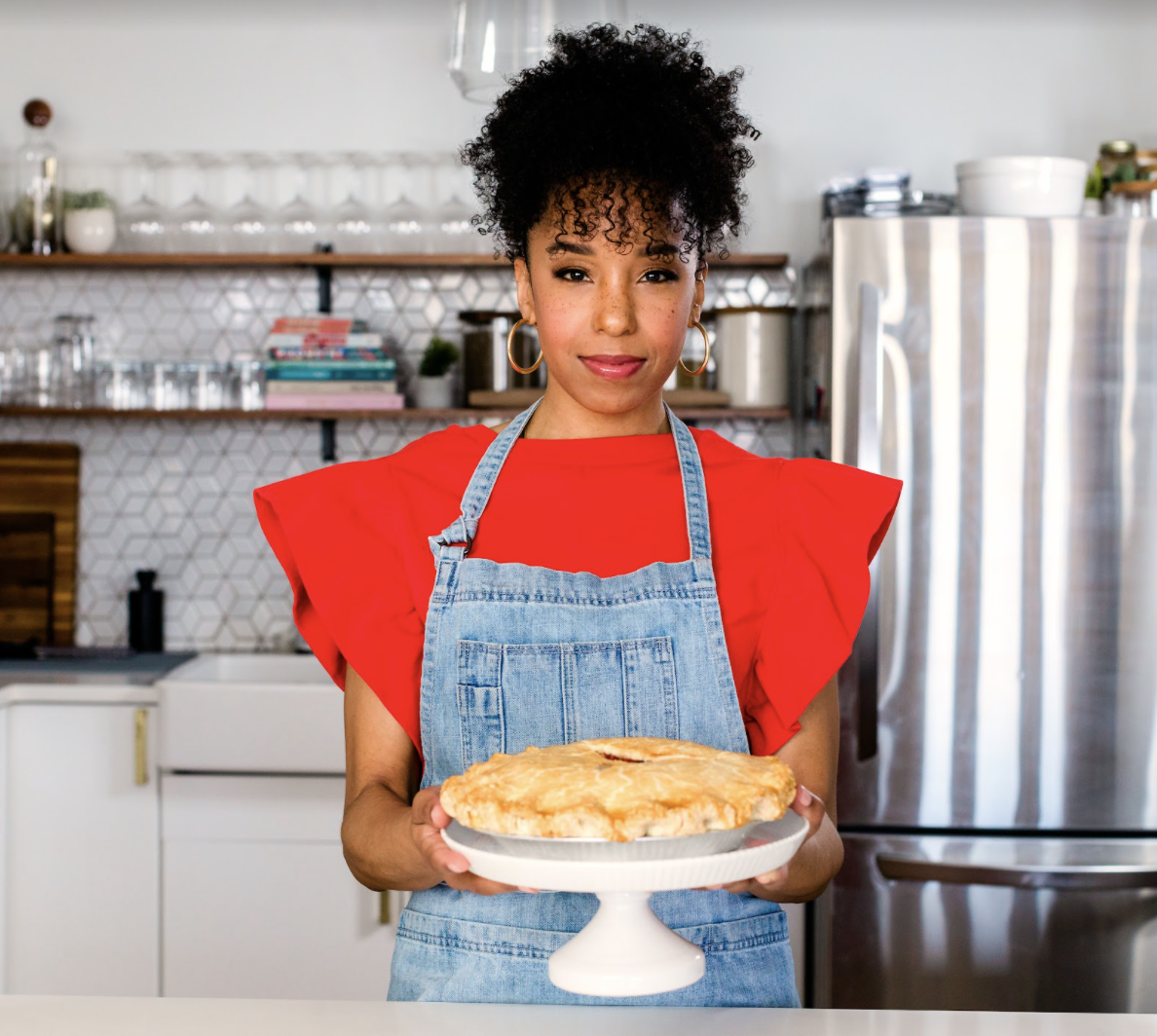 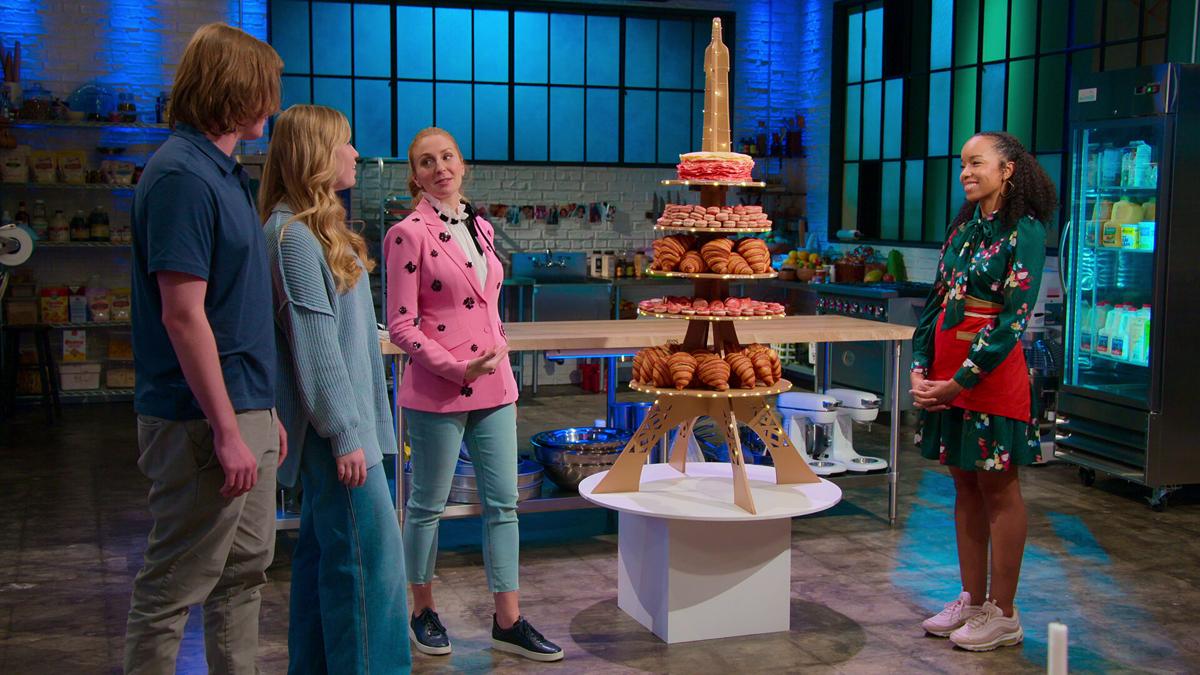 “Bake Squad,” the baking show that made its Netflix debut on August 11, is the icing on the cake — or whipped cream on the pie — for Maya-Camille Broussard.

Born and raised in Hyde Park, the savvy entrepreneur who now lives in South Shore started Justice of the Pies in 2014 and has been nurturing her business and racking up accolades ever since. She doesn't have a retail location but rather operates out of a shared kitchen, initially Kitchen Chicago and, since 2019, The Hatchery, a nonprofit food and beverage incubator at 135 N. Kedzie Ave.

Broussard specializes in sweet and savory pies, quiches and tarts. Before the pandemic, she sold her baked goods at farmers markets and art fairs, as well as wholesale to coffee shops and restaurants. She also did corporate catering, featuring main course pot pies, quiches, vegetable side dishes and nine sweet pies. She had four employees (not counting herself) but that number has been reduced to two.

The pandemic knocked out most of her customers, so Broussard pivoted. Named in honor of her late father, noted criminal defense attorney Stephen J. Brossard, who died at 60 in 2009, Justice of the Pies is an L3C, a business with a social mission, reflecting his (and her) belief in fair chances. In keeping with this, she partnered with Frontline Foods, a nonprofit that provides food from restaurants for front line workers.

In late October 2020, Broussard also began shipping five kinds of 9-inch pies nationally. “By the end of the year, we had shipped 750 pies, most of them to New York and California,” she recalled. Since May of 2021, Goldbelly has been responsible for delivery of the pies, currently Salted Caramel Peach, Caramel Apple Crumble, Bourbon Pecan, German Chocolate Pecan and Bleu Cheese Praline Pear.

“Bake Squad,” hosted by celebrity pastry chef and Milk Bar owner Christina Tosi, came calling in the fall of 2020, too. Broussard said she doesn't know why Tosi chose her, but they had done a virtual baking class together that summer, and Broussard had curated a special dessert recipe for the first-ever virtual James Beard Foundation Awards in September.

The taping also was done that fall, at AKS Stages, a spacious soundstage in Los Angeles. Unlike cooking shows that depend on the elimination of contestants for their drama, “Bake Squad” brings together four professional pastry chefs to compete in challenges posed by guests seeking a spectacular dessert for a special occasion. Besides Broussard, tagged “a flavor fanatic,” they are Christophe Rull, “a pastry illusionist”; Gonzo Jimenez, “a champion of chocolate,” and Ashley Holt, “the queen of cake.”

Each of the eight 35-minute episodes starts with a guest describing the celebration and person it is for — a baby's birthday party, a musician's wedding, a kicking cancer bash — followed by the chefs coming up with their ideas then making the sweets. Tosi helps with the brainstorming and facilitates the presentations. At the end, the guest returns, tastes the desserts with Tosi and picks the one he or she likes best. An epilogue shows the event with the dessert and the recipient's reaction.

While Broussard said she's been baking since an aunt taught her how to make pound cake at the age of ten, she didn't originally intend to make it her profession. After graduating from Mother McAuley Liberal Arts High School on the Southwest Side, she attended Howard University in Washington, DC, and earned a Bachelor of Fine Arts degree in 2001. “I started out as a journalism major but that felt too restrictive, so I switched to theater,” she said. “Anyway, I was interested in screenwriting.”

Broussard stayed in DC for a year after college and worked as a paralegal. “My father wanted me to become a lawyer, but I wasn't excited about it,” she said. “So I agreed to the job to test out the profession instead of going to law school.”

She returned to the Chicago area in 2002 to attend Northwestern University and got her Master of Arts degree in theater in 2004. “I wanted to get a masters to be able to teach,” she explained. “I already had some experience teaching theater, creative writing, visual arts and dance.”

Broussard ran Congo Square Theatre's educational outreach program from 2003 to 2008, teaching workshops in lower-income schools. Next she worked briefly at a creative arts marketing firm. Then she and Chrishon Lampley opened Three Peas Art Lounge in the South Loop in 2009. The gallery and bar featured upcoming artists, primarily of color, she said. It closed at the end of 2011.

After that she started working on Justice of the Pies, which led to “Bake Squad.” Broussard said the biggest issue for her was getting the bakes done on time. The four pastry chefs didn't have any advance idea of what they'd be making, and each episode was filmed straight through, then edited down to the run time. “We really had only seven hours to complete these elaborate bakes,” she explained, “though a blast chiller, proofers and other high-tech equipment helped speed things up,” She added that Tosi had a team to come up with display devices ranging from custom pizza boxes (for fool-the-eye dessert pizzas) to a sweet taco cart.

For the “Super Sweet 16” birthday party challenge that Broussard won, Tosi provided a multi-tiered, light-trimmed platter that resembled the Eiffel Tower, and Broussard filled it with alternating tiers of red-velvet croissants and marbled macarons topped by an Ombre Crepe Cake with more than 60 crepes layered in shades of red. “My biggest reward was seeing the reactions of the clients,” she said. In this case, they were the older brother and sister of the birthday girl,

Broussard said her favorite challenge was the “Sweet and Spicy Fiesta” arranged for a hot-pepper-loving 60 year old by his daughter. She spelled out “60” in large numbers, using muffin-size coconut mango cheesecakes for the “6” and an oblong churro flan cake with habanero caramel sauce for the “O.” She didn't win (Gonzo's dessert taco cart did) but said she really liked doing something totally different from what she typically does, “I had the opportunity to be creative with the layering and placement of the decorative fruit, among other things.”

Broussard doesn't know if there's going to be a second season of “Bake Squad” yet, but she certainly hopes so. “I'm proud of what I accomplished, people seemed to enjoy it and it helped increase the visibility of my company,” she said. “I've noticed an uptick of pie orders from across the country—though some viewers are in places like Brazil and Singapore and can't order—and my social media followers have increased by a few thousand to more than 27,000.”

Broussard has also noticed an uptick in local orders and said her wholesale customers include the University of Chicago, which will offer slices of her pies in multiple on-campus coffee shops when school starts. Although she'd like to open her own storefront shop one day, and maybe write a cookbook, for the moment, she's just focusing on running Justice of the Pies.

Her favorite pie (in case you are wondering): sweet potato.

For more information, go to justiceofthepies.com