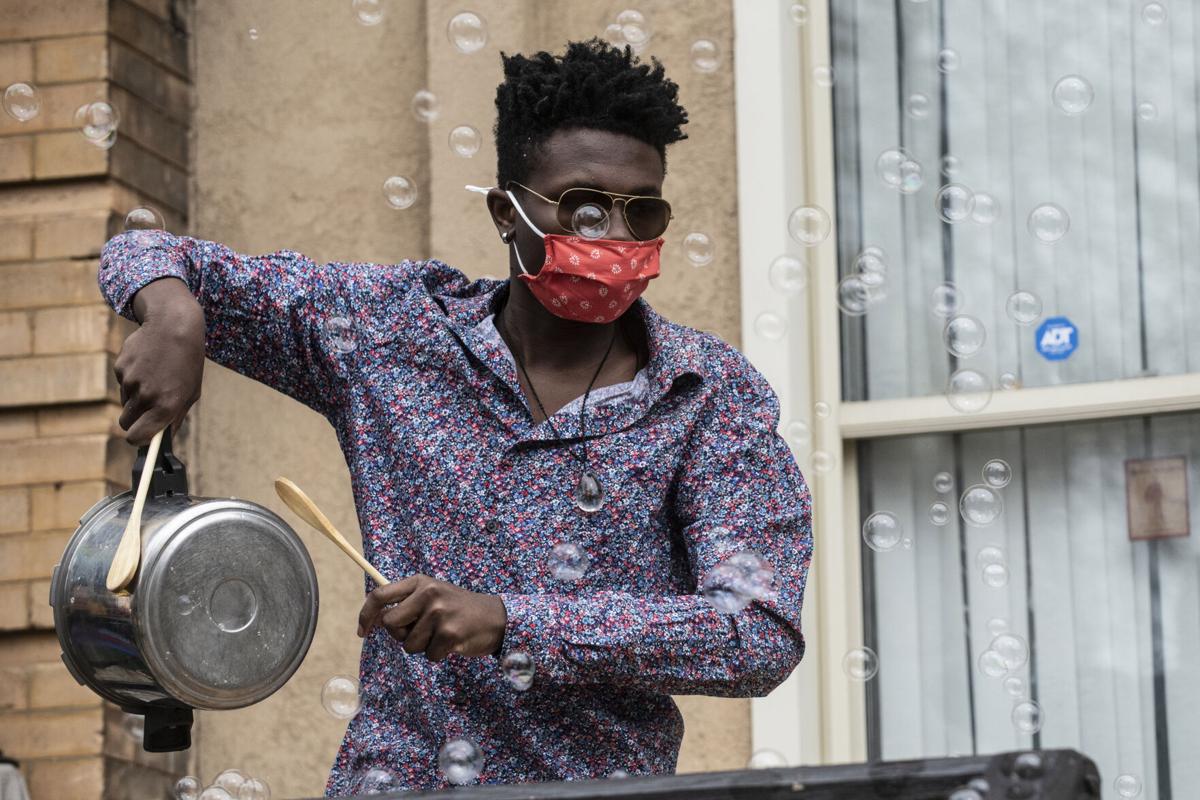 Marshall Callery joins his family and neighbors with a little percussion, as they mark one year since the COVID-19 pandemic settled in with their “Lake Park Fired Up” performance of music from around the world on March 27. 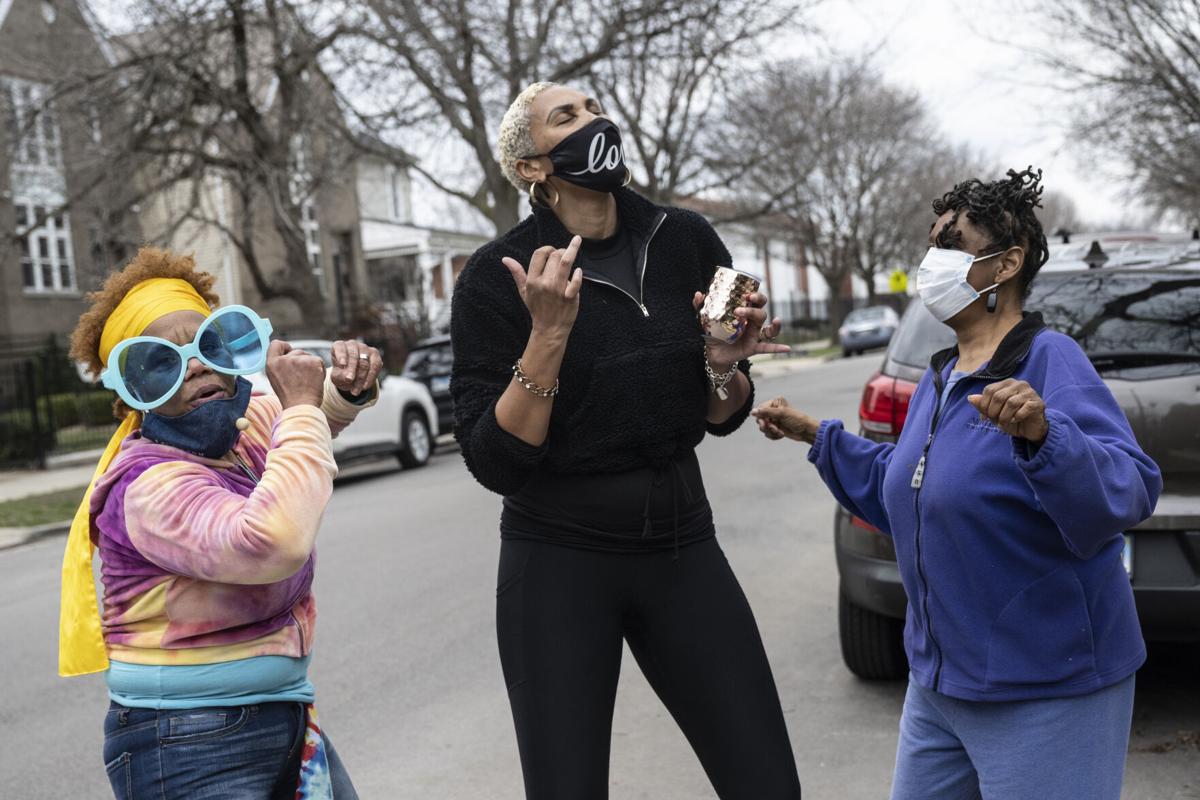 Yakini Ajanaku, Jacqui Duncan and Dr. Linda Thomas dance along the 4500 block of S. Lake Park Ave. during the "Lake Park Fired Up" celebration on March 27.

One year after the sadness and tedium of early quarantine moved a North Kenwood couple to share their musical talents, a block composed of good neighbors has become a community.

In March 2020, Jean Paul Coffy and Yakini Ajanaku, who operate the home daycare La Grande Famille on the 4500 block of Lake Park Avenue, began playing high-spirited, round-the-world music for half an hour each afternoon. They continued every day for months until the shelter-in-place ended, re-upping on occasion to celebrate Christmas, Martin Luther King Day and the inauguration.

On Saturday, the two celebrated the one-year anniversary of "Lake Park Fired Up" with two hours of music as a small, distanced crowd danced on the street and neighbors joined in from their front steps.

Ricky Jackson, down the street, said the pandemic had not profoundly changed his personal life. ("I typically stay home.")

"But as a community," he said, "Oh, man. It's just been awesome." Before the pandemic, he would say hello to his neighbors, but he did not know their names or stories. Now he does.

"People want to belong to something. All you have to do is to put it out there. And we put it out there, and you can just see: people are coming. Sometimes I would stand on my porch and literally just tearing up because people just stopped and enjoyed life for the moment," he said. "When I cross 46th Street, it's a calmness that comes."

Nefia and Myron Daniels spoke of getting to know more of the neighbors down the street. For Nefia, a nurse at Northwestern Memorial Hospital, the celebration was a great stress reliever at the end of a workday.

"By the time I'd come home, they'd already started the party, and it was really nice to after a long day's work that this was what they were doing to say thank you to those people on the front line," she said.

Linda Quinde lives south of the block in a high-rise and said she wishes she had that kind of camaraderie with her neighbors. The anniversary date was one of special significance: March 27 last year was the day Quinde realized she had no sense of smell or taste. Her daughter also got COVID-19, and her husband had to go to the hospital for eight days beginning on April 1. But, with dance music pulsating in the background, she called the one-year a renewal and a fresh start.

"Having gotten sick early, my whole family and I felt like other people didn't really understand how serious this was, especially because my husband was like right at the brink of death," she said. "Now it feels like we definitely are at the corner in Chicago where people understand, and where even though it's getting a little better, people are still being cautious. I feel a lot of hope, and I really look forward to doing more to get to know neighbors."

Akin Coffy, the organizers' son, had come back to Kenwood a year ago from Ann Arbor, Michigan, where he is in school, to gather things for his apartment when Lake Park Fired Up began, and was there playing music with them on Saturday. "I'm not here as often, but the few times that I'm able to see it, it's so amazing to see the smiles that they're able to put on people's faces, especially in the midst of such difficult times," he said.

Furthermore he said he is "not surprised in the slightest" that Coffy and Ajanaku took it upon themselves to perform 30-minute concerts every day for more than 100 days amid a once-in-a-century pandemic that shut their in-person business down. (The couple's daycare is currently running virtually as Music Magic Time.)

"This is exactly what I'd expect them to do," he said. "I can't imagine my parents just sitting back and not doing something to help the people around them. They love the neighborhood so much; they love everybody here."

After the anniversary celebration, Ajanaku said it had been great.

"Everything we expected, it always is," she said. "What I love about it is it's not scripted so much. It's based on the energy of the people and the climate of the air where we are."

She commented on the power the event had over people who stopped to enjoy it as it was held over the year. "We're going to be planting a seed," she said. "I guarantee you, if that seed is cultivated, it grows."

The block is forming a block club, with organizing meetings over Zoom and another edition of Lake Park Fired Up to occur on Juneteenth.

Jacqui Duncan, a new homeowner on the block, met Ajanaku and Coffy in December, when she heard music playing outside; it turned out the block was celebrating Christmas together.

"What fascinates me is that I assumed all of this was prior to COVID," Duncan said. "I assumed that everybody knew each other and this chemistry, this bond, this family on the block — COVID made this happen. This is one of the benefits of COVID, ironically, that when they decided to do this, everybody decided to come out of the house, started to meet each other and realize how important connection was."

Duncan said she was welcomed right away, and she hasn't missed a celebration since. She has invited friends to them.

"They think it's the best thing," she said. "I've never seen anything like it. I just told her we need to keep doing it."