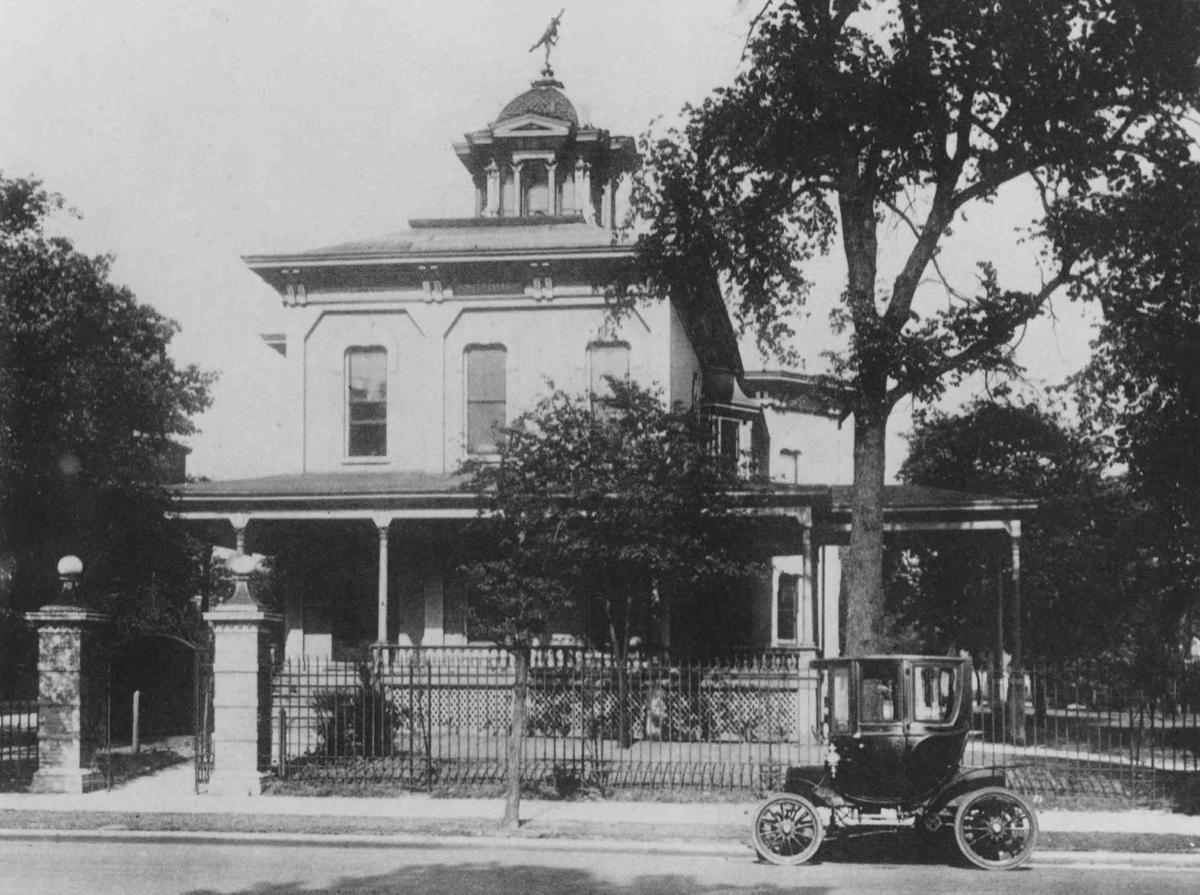 George and Sarah Clarke’s cupola-topped house of was one of the early residences on Drexel Boulevard, built on the east side,just north of 47th Street.  The architect of 4651 Drexel is unknown; the house graced this corner of the elegant Kenwood neighborhood until it was demolished in 1917 to make way for a large apartment hotel. 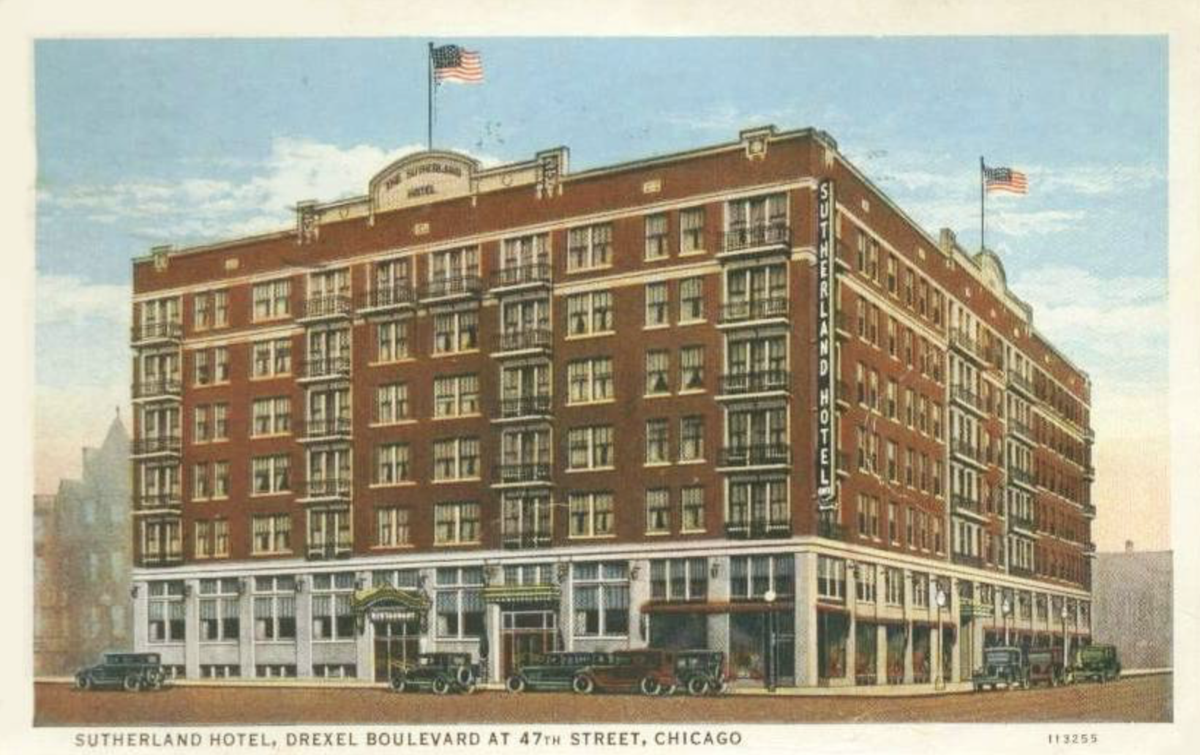 Flags fly above the Sutherland Hotel in this post card image of the structure at Drexel Boulevard and 47th Street. The structure was built on the site of the Clarke residence.

George and Sarah Clarke’s cupola-topped house of was one of the early residences on Drexel Boulevard, built on the east side,just north of 47th Street.  The architect of 4651 Drexel is unknown; the house graced this corner of the elegant Kenwood neighborhood until it was demolished in 1917 to make way for a large apartment hotel.

Flags fly above the Sutherland Hotel in this post card image of the structure at Drexel Boulevard and 47th Street. The structure was built on the site of the Clarke residence.

The series has completed a look at the development of the major intersections along Lake Park Avenue and turned to stories of interest within the Hyde Park and Kenwood communities.  The articles are all of varying topics but relate to the residences that currently or in the past have defined the urban fabric.

When working on the book Chicago’s Historic Hyde Park, my dear friend and mentor John Vinci offered an indispensable piece of advice. The talented architect taught me to return time and time again to the images of a particular place, and through studying those a story would emerge. An offshoot of that has come to be a that as I look out over any particular landscape, my eyes do not exactly see things as they are today. Rather a curious brain melds the current visual with the images of structures long gone. And so it is for today’s story - sitting in a car at a red light at Drexel and 47th Street looking northward down the boulevard awash with sirens and horns, quieted lives reemerge out of one shade dappled avenue.

In 1869 the Western News Company published a book entitled a “Descriptive Historical and Statistical Account of the Suburban Towns and Residences of Chicago.” Written by James B. Runnion, the stories about the city’s suburbs originally appeared in the Sunday edition of the Chicago Times under the name Out of Town. Only after acquiring a “familiarity with the number, the extent, the growth, the enterprise, and the character of these suburban settlements,” Runnion wrote, could the vigor, immensity and possibilities of Chicago could be properly understood.

In his book, Runnion described the rapid improvement of an avenue in suburban Kenwood that would become home to many of Chicago’s elite. Although Kenwood was still sleepy in the years before the Chicago Fire, he noted a number of houses planned and others well under construction. On the northeast corner of Drexel Boulevard at 47th Street, Col. George R. Clarke had begun building a “fine brick residence.”

Clarke joined the volunteer Illinois Infantry in August 1862 and finished the Civil War as a lieutenant colonel. After the South surrendered he returned to Chicago and endeavored to make his fortune in real estate. The story is told that while his wife Sarah Dunn Clarke was contemplating an elaborate interior for their new home on the boulevard she recalled hearing an audible voice. As if from heaven, it questioned her: “What are you doing to decorate your heavenly home?”

This moment changed the direction of their lives; they opened a ministry in a small south store side in 1877. The Clarkes were motivated by conditions in the city’s slums - with their gambling halls, saloons and brothels – and endeavored to provide food, clothing and the gospel to Chicago’s downtrodden.

In 1880 the location of the rescue mission moved from Whiskey Row to the site of the disreputable Pacific Beer Garden. The Clarkes assumed the name but left the “Beer” behind. Billy Sunday, a popular outfielder in the National League, was influenced by the gospel preached on the street corner outside the Pacific Garden Mission. The former White Stockings player went on to become the most celebrated and influential American evangelist during the first two decades of the 20th century. The Pacific Garden Mission continues to operate as a homeless shelter on Canal Street in the South Loop neighborhood.

The 1890 Chicago Blue Book of Selected Names listed the family of hotelier Warren Leland as residents of the handsome Italianate house. Leland came from a family of hotel managers known across the country. In addition to the Leland Hotel on Michigan Avenue in Chicago and the Chicago Beach Hotel in Hyde Park, he was also the proprietor of the Windsor Hotel at 575 Fifth Avenue in New York City.

It was in that city that tragedy struck. Leland’s family was staying at the Windsor in March 1899, and had gathered to watch the St. Patrick’s Day parade passing below, when a rapidly moving fire spread through the building. Fire destroyed the seven-story structure within ninety minutes, killing both his fifty-two-year-old wife Isabella and their daughter Helen, who jumped from the sixth floor of the hotel. Sounds of mourning filled the house when Leland brought the bodies back to Chicago for the burial. In a state of shock his own death soon followed: Leland lived only until the fifth of April.

The streetcar was a fixture on 47th Street by the time the Harvard School for Boys, the oldest college preparatory school in the city, occupied the cupola-topped house. Commercial enterprises lined the street and residences were often converted for other uses. The fine house stood on the corner until 1917, when it was demolished to make way for a large apartment hotel. Although planned to be luxurious, the new large structure would completely change the streetscape.

Henry Newhouse and Felix Berman, best known for large commercial buildings and apartments, were commissioned to design a mammoth hotel on the site. The Cooper-Monotah Apartment Hotel was intended to be a high-class operation with 236 rooms, but things did not quite work out that way.

The idea of making a temporary hospital within a large vacant space, such as Mayor Lightfoot organized in McCormick Place during the current Covid pandemic, is not a new one. In January 1918 the partially completed hotel was taken over by the US Government and operated as General Hospital No. 32. The nation had mobilized to go to war, but lacked facilities to treat the injured. The hotel had not been completed on the interior; that permitted the construction of two large wards of sixty and eighty beds each. After the war ended the hotel was assigned to the US Public Health Service, which operated it until 1925.

By that time the boulevard had fallen out of favor with Chicago’s elite; the building was purchased by a consortium and renamed the Sutherland. The structure was rehabbed into an apartment hotel with commercial space at street level, and operated as such in to the late 1940s when the demographics of Kenwood were rapidly changing. 47th Street prospered as a vibrant commercial avenue and the nearby blocks west of Cottage Grove were a source of pride and a haven for Chicago's African-American community. However segregation east of Cottage was typical of the era, the Sutherland refused to serve black clientele.

The sale of the property to Maxwell Rubin, Lee Gould and Samuel Cohen resulted in the building’s integration. In the early 1950’s the new owners invested in a rehabilitation at a time when other white businessmen were fleeing the neighborhood. They hired an African -American businessman, Earl Clark Ormes, to manage the property and advertised the Sutherland as the “South Side’s Most Progressive Hotel.”

By day 47th Street was a vibrant commercial district, at sundown it transformed into a throbbing center of nightlife. Jazz became popular on the South Side in the 1920s when several venues opened at 47th Street and South Parkway (now Martin Luther King Drive.) Catering to African-Americans the Savoy Ballroom had two shows every evening, while the lavishly decorated Regal Theater also featured films. The heyday of these south side jazz clubs was from the 1940s into the late 1960s.

In 1952 the Sutherland Lounge, with its circular bar around the raised set stage, became the first “whites only” jazz club to admit African-Americans. For a time the music was legendary and the Sutherland was home to many artists, including Louis Armstrong and Miles Davis. Dizzy Gillespie received Downbeat magazine’s “best trumpet man” award here in the fall of 1960. Vocalist Etta James recalled the early days of her career in an interview for Rolling Stone magazine, “We were hungry, starving musicians.” She remarked that Marvin Gaye, Curtis Mayfield and “everyone who mattered in Black music” played in the lounge or stayed in the low-budget rooms.

The Sutherland began a slow decline in the late sixties and closed in 1982. Six years later the abandoned hotel was remodeled to provide 154 units of low-income housing. There were plans in the late 1990s to turn the rundown vacant ballroom into a musical hot spot, but those hit a sour note. The building was once again sold renovated to provide rental apartments, but the mecca for musicians remained shuttered. The voices of those heard long before have been lost to time, but James Runnion was right –familiarity with just one street corner can help us better understand our vibrant and ever-adapting city.