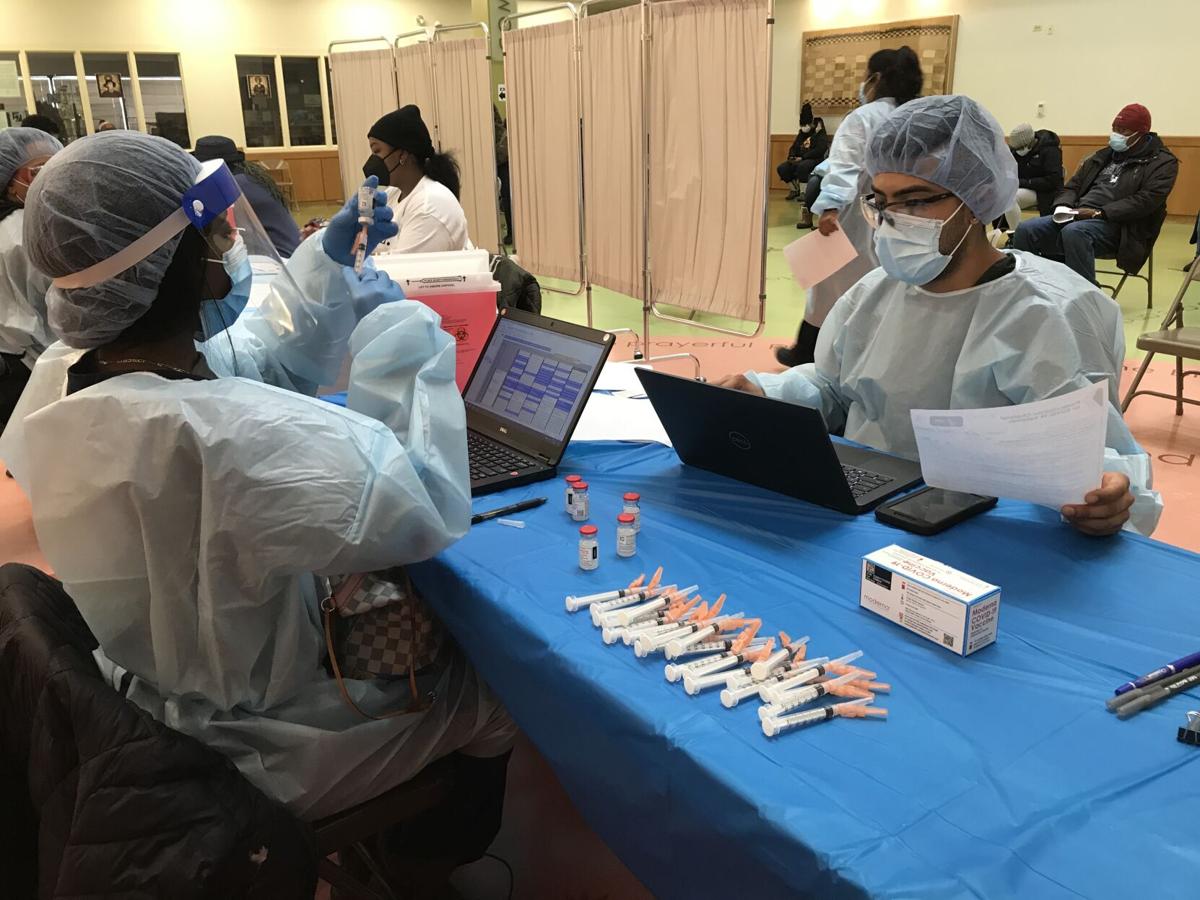 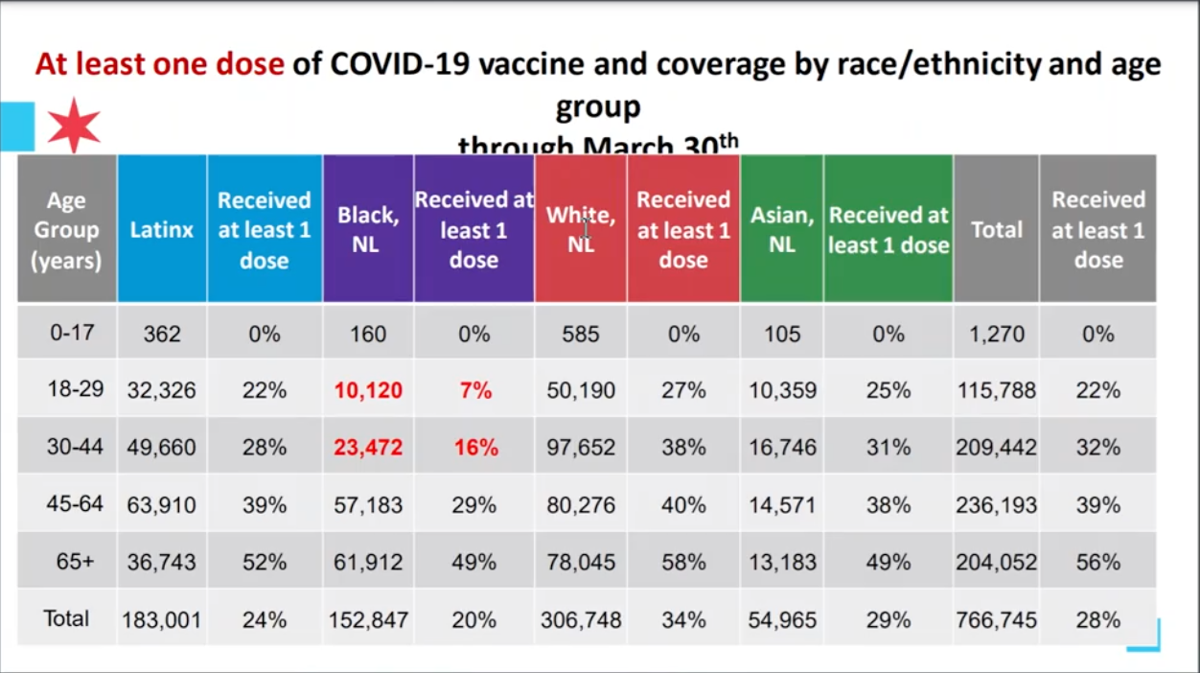 The current upswing in COVID-19 cases is disproportionately centered on the North Side, but as of last month, younger Black Chicagoans are the least likely group in the city to have gotten vaccinated.

On March 24, AIDS Foundation Chicago and Howard Brown Health, a network of federally qualified health centers oriented towards LGBTQ health care with a location in Hyde Park at 1525 E. 55th St., demanded that the Chicago Department of Public Health (CDPH) "include and name" all majority-Black and Latino communities as priorities for vaccine distribution immediately.

To a degree, the city had already done so, opening vaccine appointments at the United Center to all residents living in “vulnerable, under-vaccinated ZIP codes'' on the South and West sides in early March, weeks before some would have qualified by their occupations or age. (Hyde Park was not included, but South Shore and Bronzeville were.)

The ongoing "Protect Chicago Plus" program aims to deliver vaccines to 15 neighborhoods, including Back of the Yards and Englewood, through "tailored vaccination and engagement strategies" like vaccine clinics, outreach teams and special events.

Asked on April 6 about the letter, Mayor Lori Lightfoot said there was no way to satisfy everyone but that her administration was confident in the strategy. CDPH Commissioner Dr. Allison Arwady said the city’s efforts have erased inequalities in COVID-19 cases citywide.

“We opened the United Center, and the prioritization first goes to everyone below I-55,” Arwady said. “Every time that we're doing anything, we open it with the focus on equity and with the focus on under-vaccinated communities, which tend to be predominantly Black and Latinx.”

On April 8, Arwady said the increase in new COVID cases is flattening, though she speculated that it could be due to the Easter holiday affecting testing.

"While we're following cases, I don't want people to see that sort-of surge of cases on the North Side and think it means 'if I live on the South Side, I don't have to be vaccinated,'" said Arwady

"We're working really hard to lower barriers here, getting vaccines out there … dedicated pods, working with pharmacies, Protect Chicago Plus is going, opening additional sites," Arwady said. "Given that we're still seeing more of the severe outcomes among Black Chicagoans and we're seeing some of these lagging rates, we did want to highlight that."

She said the city would work more with community groups "and trusted voices on the ground," with work on faith-based initiatives, but that "this is a concern, certainly."

A third of Chicagoans have gotten at least one dose of vaccine; more than a fifth are fully vaccinated.

To the point of vaccine roll-out already being prioritized to certain ZIP codes, Tim Wang, Howard Brown's Director of Policy and Advocacy, said that the response should be strengthened throughout the rest of the pandemic. "We know that when everyone is eligible for a service, that doesn't mean that everyone has equal access to that service," he said.

He used PrEP, the daily pill that prevents HIV infection, as an example: "Everyone who is clinically eligible by the guidelines to have PrEP can get PrEP, but we know there are really big disparities in terms of PrEP uptake in racial and ethnic minority groups.”

"One way that we would want to strengthen commitment to racial equity," Wang said, "is more distribution and redirection of vaccines directly into the community, so that we're meeting people where we're at." He cited distribution at churches and cultural centers, places where "folks can literally walk out of their house and get to a vaccination site."

(On Saturday, Lightfoot announced a partnership with Walgreens to vaccinate 10,000 Chicagoans from 70 different houses of worship at 13 clinics throughout the rest of April.)

Wang pointed out that that the Protect Chicago Plus neighborhood campaigns are only expected to last eight weeks and argued that there needs to be a lasting commitment in those neighborhoods and in all majority-Black and -Latino neighborhoods, "through either the end of the pandemic or until there is a herd immunity threshold that's met within those communities."

In sum, Wang said Howard Brown wants the city to have regular standing community vaccination sites as well as the resources for third parties to run long-term pop-ups outside of regular business hours.

In late February, the Department of Public Health announced a $15 million contract with Prism Health Lab to operate mass vaccination sites "in the coming months."

As of March 28 to April 3, COVID-19 positivities remain below 5% in all four mid-South Side lakefront ZIP codes, though they are rising.

The city’s figures are accurate as of April 12, recorded at chi.gov/coviddash, and change as additional past data comes in.

All Chicagoans aged 16 and older will be eligible for the vaccine on April 19. The city's website for vaccine information is chicago.gov/covidvax. The city's online platform for vaccine scheduling is zocdoc.com/vaccine. Seniors can also register over the phone at 312-746-4835.