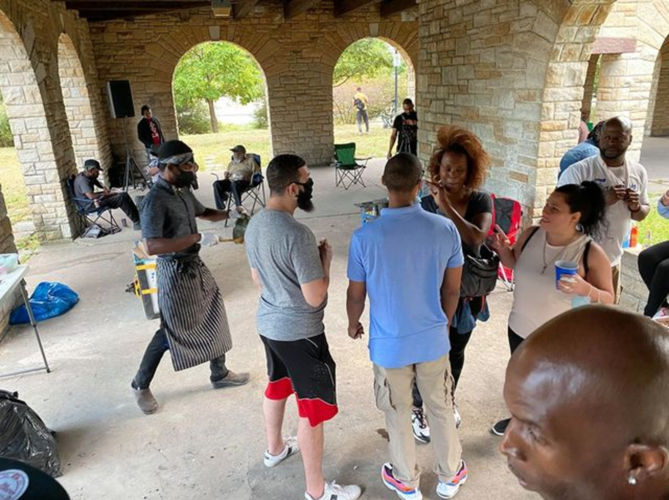 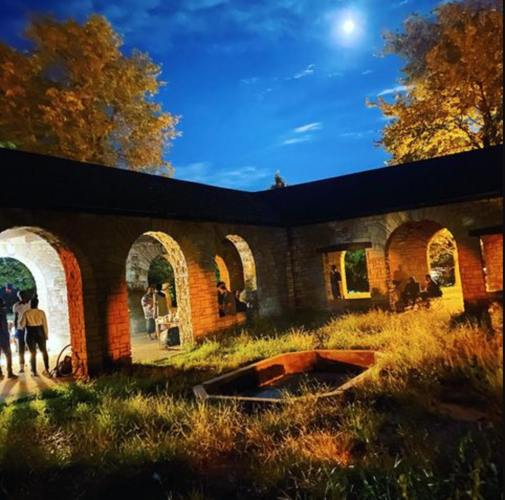 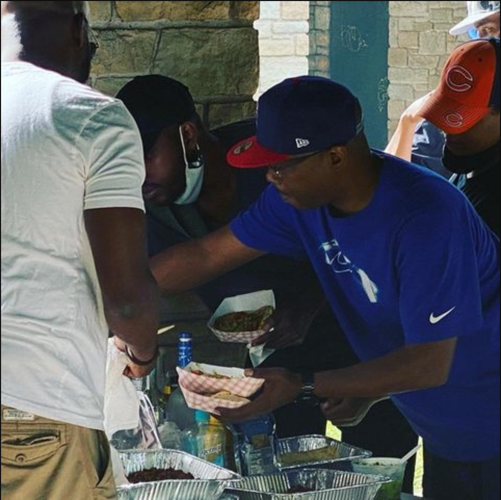 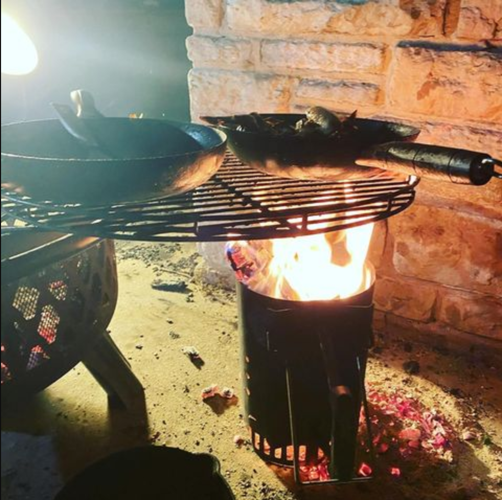 Forced out of their haunts by the public health crisis, staff and regulars of The Cove Lounge and Falcon Inn gathered at the dilapidated Iowa Building in Jackson Park for an open-air, bring-what-you-can, come-as-you-are run of Sunday afternoon barbecues through Sept. 13.

At the last one of six, chef Hamid Harris threw together stir-fry while monitoring three smokers as a DJ spun blues, funk and dirty rap. Visitors swilled drinks, smoked cigarettes and rolled blunts as the summer faded away.

Gerald Cook, a bartender at The Cove, 1750 E. 55th St., said the idea came about from 2019 bonfires at Promontory Point. "This year, because of the pandemic and Park District rules, we couldn't necessarily do that, so we came out here, and as you can see a lot of people are masked up and sort of spaced out," he said. "It's been going good.

"We think if you do it safely and you follow the guidelines put to us by Lori Lightfoot and the governor, you can have a small gathering like this if everyone's responsible."

From afar, the "Hyde Park Bonfire Club," which has 500 members on Facebook, appears much like any other joyous summertime use of Chicago's parks.

But these, of course, are not normal times.

There is no doubt that those at the Bonfire Club would be closer together if the pandemic were not at hand, but to have attended the gathering — any gathering — is an assumption of risk in 2020. Masks were worn, but not all the time. People touched

The Iowa Building is, if course, outdoors, where the coronavirus spreads less easily, and Cook noted that volunteers serving drinks and food were wearing gloves in addition to masks. Nobody, as far as he knew, had been infected there. Everyone at the party was an adult who made a conscious assumption of risk with their presence.

For Michael J. Wade, a North Sider who was visiting friends and liked the Bonfire Club's welcoming nature, the event was a study in contrasts.

"I personally live in Old Town, and I see more people without masks in my neighborhood," she said. "I legitimately live across the street from a Target (on) Division, and I see people walking their dogs — no masks. I work in Lincoln Park — no masks. I shop in Lincoln Park — nobody has a mask on. I see more people here with masks than anybody further north doing anything: shopping, walking dogs, working out, running, biking.

"I see this gathering where it's like, 'Hey, you know what? We want to gather, we want to be here — we need to wear a mask.' Because that's the community of this gathering. Because we know we need to."

Reuben Thomas, a regular at the Falcon, 1601 E. 53rd St., missed the first two gatherings before his friends got him to start coming. He said he contributed by handling trash afterwards and fixing electronic equipment if anything went wrong.

Thomas said he worries about COVID-19; he touted a ready intake of raw garlic to keep the coronavirus at bay, though the World Health Organization says there is no evidence it protects people. But he has lost two family members to the disease.

"But you've got to understand," he said. "You've either got to get busy dying or get busy living, because what happens in between, you're not getting out, I get it. Just be responsible. Masks, raw garlic and sanitizing. But it's not as simple as that, I get it. What are you going to tell anybody else? I'm not the best representative of it."

Thomas said people only have one life to live; if people plan to do something stupid, he urges them to be smart about it.

Is the Bonfire Club stupid?

"This isn't stupid," he said, recalling the skyrocketing rates of depression in the United States. "We need this. People have to get out."

I wish more had been wearing masks, but restaurant outdoor patios do not require it when actually eating. Alcohol is not supposed to be consumed in parks without a special permit and insurance. More than 50 guests requires a permit -- did they get these? Also, Louise McCurry and others have had to do extensive cleanup after every weekend (granted this has also true after Friday and Saturday nights.

There is a firm commitment with state money to do extensive repairs to the Iowa Bldg. Gary Ossewaarde

What all the attendees wanted to know was what can we do to help the Iowa building get restored?

Put together a business plan, and open a 'concession' there. Part of the Iowa contains a building, where the kitchen used to be. Good spot for a seasonal restaurant.