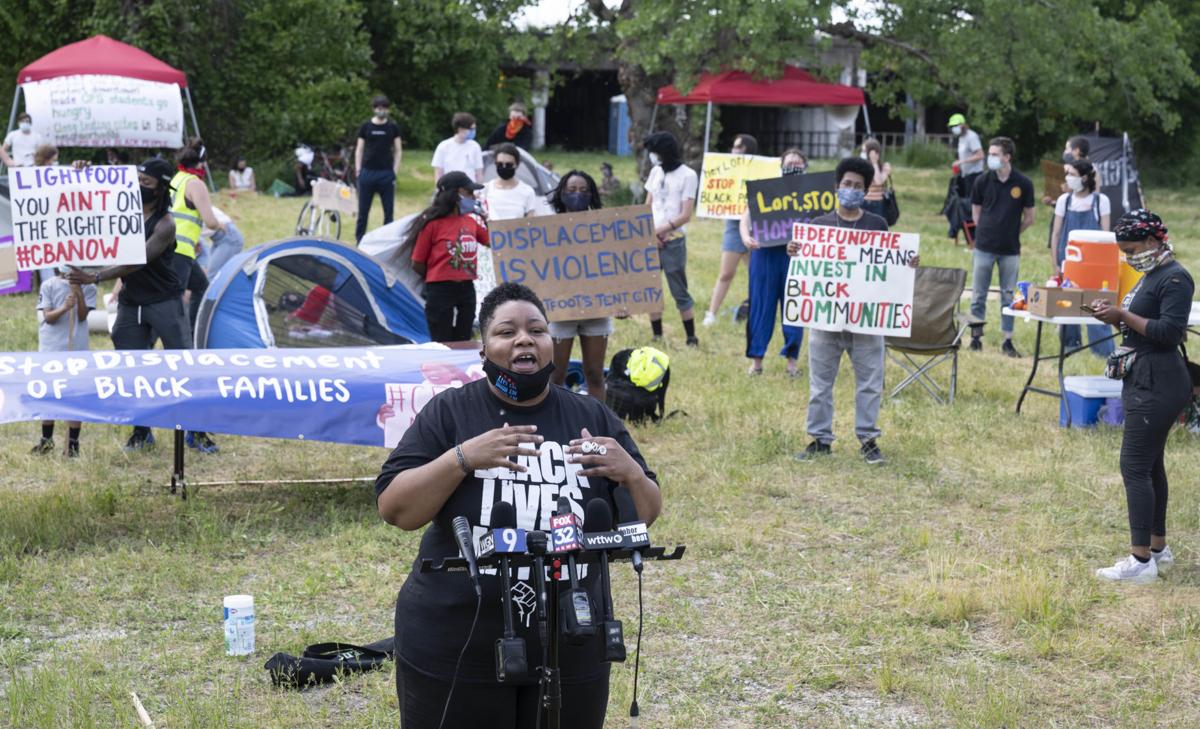 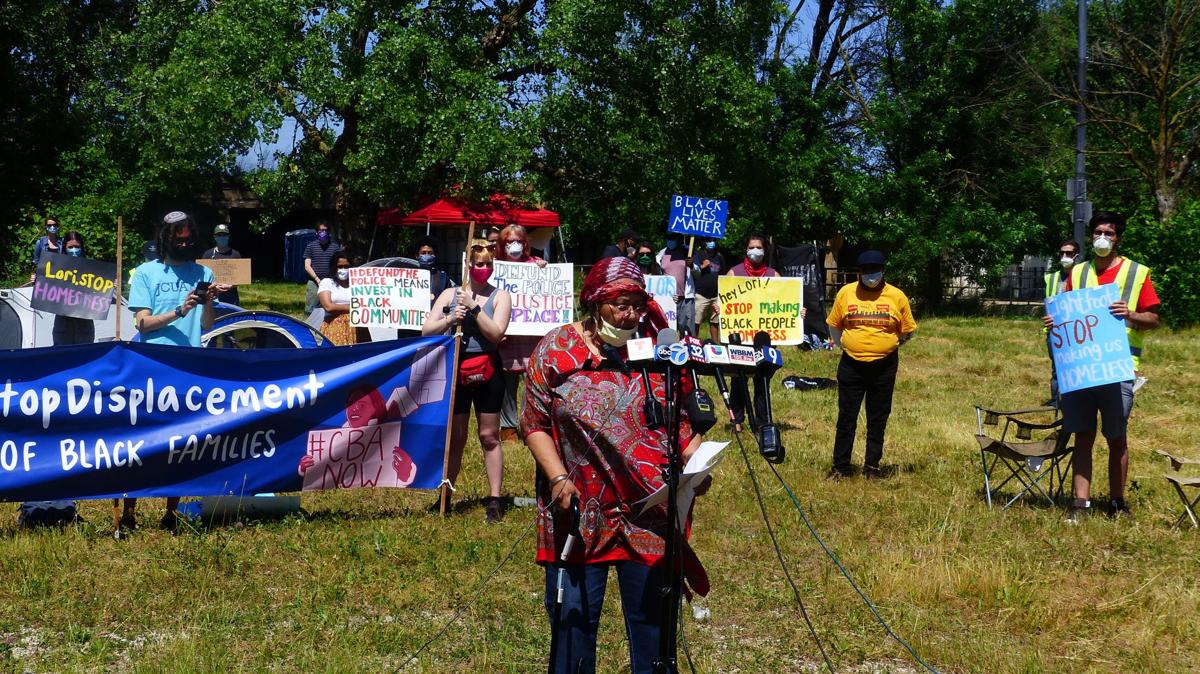 A Woodlawn resident since 1980, Ms. Sharon Payne says she wants the mayor to support a Community Benefits Agreement that would provide housing for long-time Woodlawn families with incomes of less than $50,000.

A Woodlawn resident since 1980, Ms. Sharon Payne says she wants the mayor to support a Community Benefits Agreement that would provide housing for long-time Woodlawn families with incomes of less than $50,000.

Organizers for a Community Benefits Agreement (CBA) erected a tent city in Woodlawn Thursday morning, as part of their campaign to bring more affordable housing to the neighborhood.

Beginning at 10 a.m., activists set up about a dozen tents in a vacant lot at the corner of 63rd Street and Blackstone Avenue. A banner that said “Stop Displacement of Black Families” welcomed visitors to the encampment, dubbed Lightfoot’s Tent City and intended to evoke the Hoovervilles of the Great Depression.

At a press conference, CBA organizers criticized Mayor Lori Lightfoot’s Woodlawn Housing Ordinance, introduced in February. The ordinance sets aside some city-owned land for affordable housing, and proposes funding several programs to boost home ownership and rehab in the neighborhood.

But activists have argued that the ordinance does not create enough affordable housing for the neighborhood’s lowest-income residents, particularly those making less than 50% of the Area Median Income (AMI), or about $36,400 for a two-person household. According to their calculations, only about five percent of low-income Woodlawn residents would be protected under the current ordinance.

Under the city’s February ordinance, any city-owned land that is sold to a developer would be subject to certain affordability restrictions. For projects larger than 15 units, at least 20% of those will have to be leased to households whose income does not exceed 80% of AMI.

For projects between 6 and 14 units, 10% of the units would have to be leased to households with an income under 80% AMI. Those affordability requirements would be in place for 30 years after the last unit in the project has been rented.

The CBA coalition and Ald. Jeanette Taylor (20th) have both said that they want three-fourths of city-owned land set aside for those making less than 50% AMI, with a special focus on those households with incomes under 30% of the AMI.

Eboneé Green with the CBA coalition said on Thursday that the city has upped its offer, now proposing that a fourth of city-owned land would be set aside for affordable housing for the next four years. It also has said it will lower the required income ceiling for the Preservation of Existing Affordable Rentals program from 80% AMI to 50%.

Green, however, said it still wasn’t enough. “We know that on most of these empty lots there are going to be beautiful luxury developments,” Green said. “But we want to make sure when all of these beautiful luxury things come, that we have a place here.”

Green also tied the CBA campaign to the coronavirus pandemic, as well as the nationwide protests and uprisings in response to the death of George Floyd.

Ald. Taylor, who attended in the early afternoon, introduced her own housing ordinance last year.

“For some strange reason, the mayor’s office, along with the housing department, came up with their own ordinance. While that ordinance does take some bits and pieces out of the CBA ordinance, it does not do enough,” she said. “The median income here is $24,000, so who does that help? It does not help the people.”

Ald. Byron Sigcho-Lopez (25th), who represents parts of Pilsen, criticized Lightfoot for being unresponsive to attempts at negotiation.

“The CBA demand is a demand that is consistent, and it comes from the ground up. We are tired to see, across the city, communities of color being marginalized,” he said. “We continue to see an administration who is not willing to sit at the table with the leaders of our communities.”

City officials have said that the ordinance incorporates input from the community, including the CBA coalition. In a March meeting, Ald. Leslie Hairston (5th) highlighted in particular the right of first refusal, which lets tenants come together to buy a building their landlord plans to sell.

“For us, probably the best way to achieve the scale to address the issue is the Low Income Housing Tax Credit program, which is the single most productive affordable housing development program, period,” he said. “Where does that happen? New construction on vacant land. If we don’t set land aside for that purpose specifically, we don’t see how we’re going to achieve the level of scale needed to address the problem.”

Mayor Lightfoot ran on a promise to get a CBA in place. Instead, we are seeing locals pushed out, rising rents. What the City is offering isn't effective, and developers are ready to move in, constructing upmarket condos that no local can afford.

This CBA encampment should be front page news. Instead, it gets buried. This is unfortunate, as this is civil rights 101, Black people struggling to have some control over their neighborhood. Many families have lived here for generations, and they want to remain.

I stand behind Alderman Taylor, and urge Mayor Lightfoot to enact strong legislation to keep residents in place. This is why we elected this alderman, to get a strong CBA in place.

I absolutely support the effort to get a CBA in place. The Mayor did promise this. I am suspicious of the motives of the U of C here, like why are they contributing $30 million to this? What about their land, their property? This appears to be an effort to gentrify Woodlawn. This is the U of C wielding their economic weight. Those lots will have million dollar houses on them, and the neighborhood - gone.