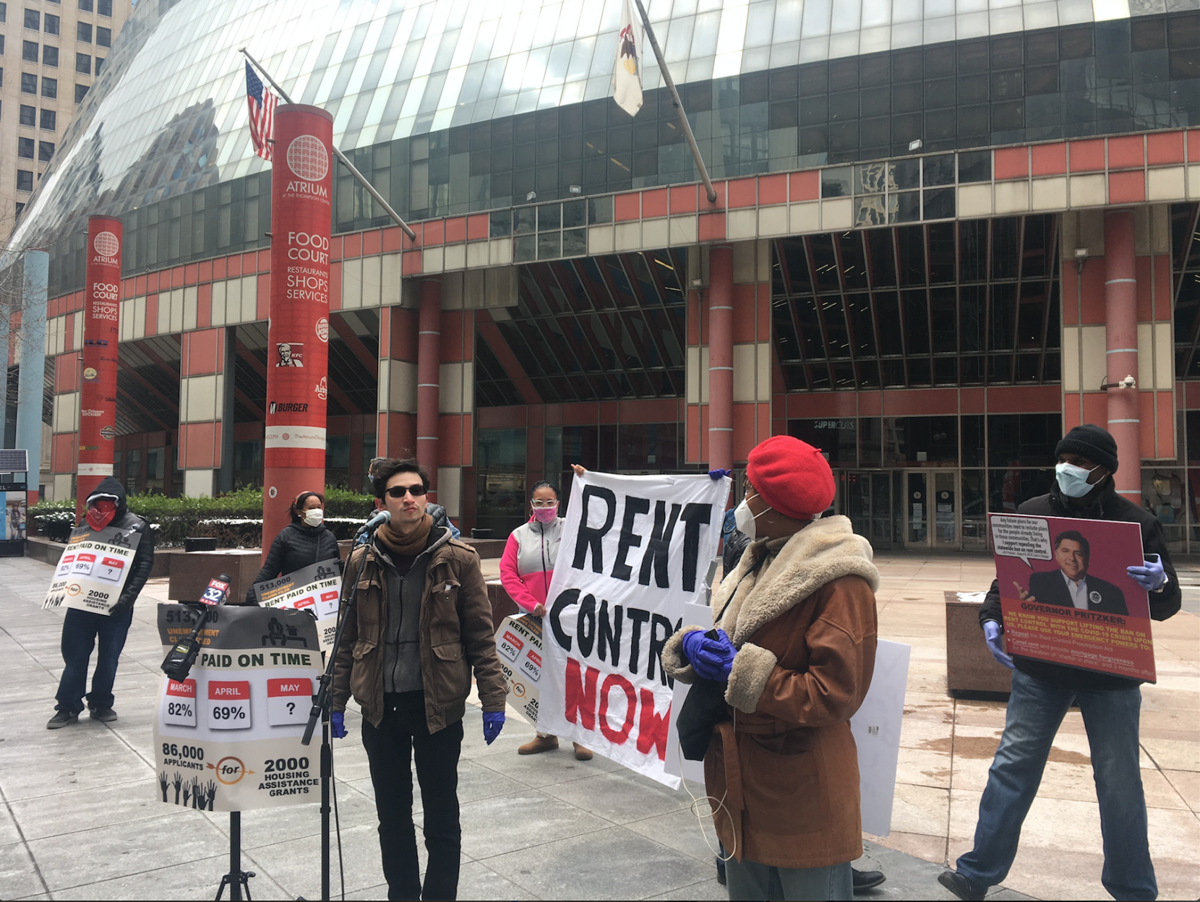 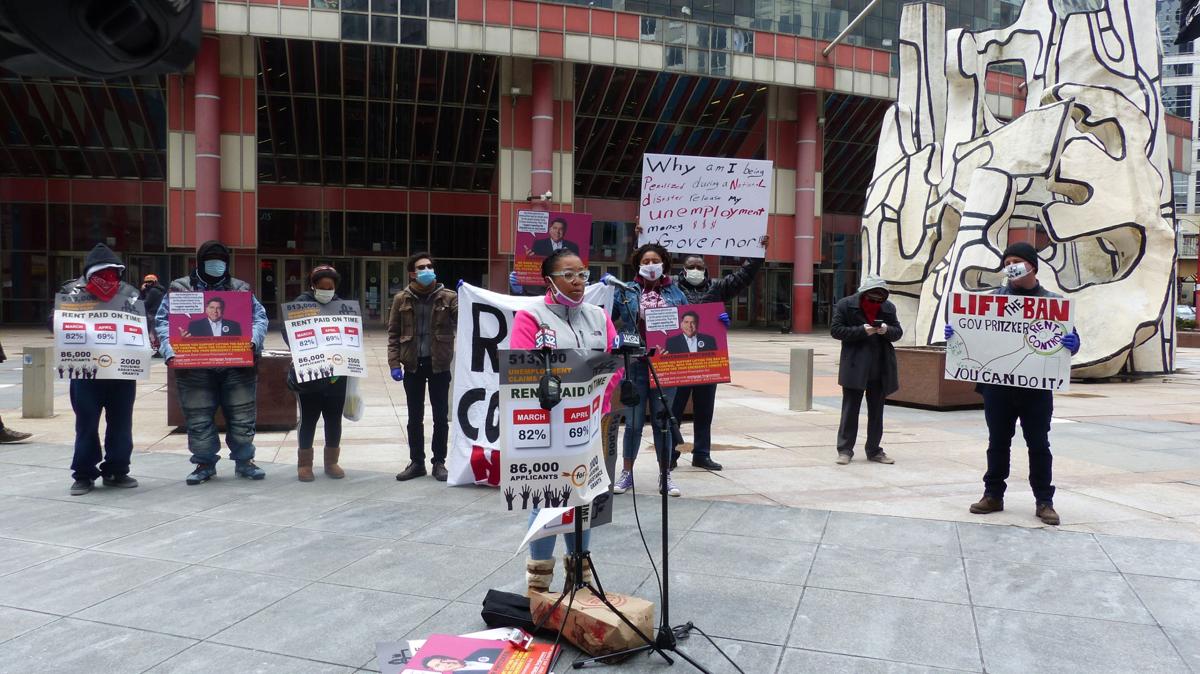 At today’s protest in front of the Thompson Center, Angelic Smith, an unemployed mother of five and a Chicago Public School para-professional, says it is wrong to force people to choose between paying rent and feeding their families.

At today’s protest in front of the Thompson Center, Angelic Smith, an unemployed mother of five and a Chicago Public School para-professional, says it is wrong to force people to choose between paying rent and feeding their families.

A relatively small band of rent control organizers protested in front of the Thompson Center Wednesday afternoon, calling for Gov. J.B. Pritzker to repeal the ban on rent control and institute a rent freeze for the duration of the coronavirus outbreak.

“We believe it is not adequate to shore up some money here, a GoFundMe there. Whatever resources the state or city has available, it needs to meet the severity of the crisis with the severity of the action that we need in this moment,” said Diego Morales, a member of the South Side chapter of the Democratic Socialists of America. “What does a shelter in place order mean if we do not know whether we’re going to have a shelter in the coming months?”

The Rent Control Preemption Act, passed in 1997, prevents municipalities in Illinois from instituting rent control locally, and Mayor Lori Lightfoot's office has said it also stops the city from providing rent relief during the coronavirus outbreak. Ordinarily, repealing the law would have to be done by the state legislature, which is not currently in session.

Last week, however, the Lift the Ban Coalition, which organized Wednesday’s protest, released a memo from the law firm Despres, Schwartz, and Geoghegan. It argued that the governor can provide rent relief in a number of different ways. Under the Illinois Emergency Management Act, one part of the argument runs, the governor can suspend regulatory laws if they would “prevent, hinder or delay necessary action...in coping with the disaster.”

This action would be similar to the moratorium on evictions Pritzker has ordered, but the memo also argues that the governor could provide relief for the duration of the stay-at-home order, or suspend the ban and allow municipalities to institute rent relief themselves.

It was one of these actions that demonstrators urged Pritzker to take during Wednesday’s protest. About 15 to 20 protesters met in front of the Thompson Center, where they held placards highlighting the plight of renters nationwide, such as data from a recent report showing that 31% of tenants did not pay their rent during the first week of April.

The demonstration began with dozens of cars driving along Randolph Street between the Thompson Center and City Hall, honking and with signs in their windows carrying slogans like “Cancel Rent” and “Rent Freeze Now.” It continued with testimony from renters about why they need rent relief during the coronavirus crisis.

One of the speakers, Angelic Smith, told the Herald that she lived in Hyde Park until this past January, when she moved into a more affordable three-bedroom in Hanson Park, on the northwest side. A few months ago, she left her job as a teacher to spend more time with her five children — her sons have special needs, while her daughter struggles with mental illness. Because she works as a substitute teacher, she’s currently paid based on the average number of hours worked before the public schools closed due to the outbreak.

But even with that money, Smith has had trouble covering her rent — it took two weeks to scrape together enough money for April, which means she had a late fee tacked on to her normal rent. She covered food expenses in an unorthodox way: after writing a letter to Farmer’s Fridge, the Chicago-based start-up that sells fresh meals in vending machines, the company sent her two free shipments of food.

“I’m trying to help my parents who are older and elderly and make sure they have enough money to eat, and make sure my children have enough to eat. And it’s really sad when your children are barely eating,” she said during the rally. “When you’re a city worker, you work hard all these last couple of months before this pandemic hit. Because you live to work every day, you work every day. What are we supposed to do?”

Jordan Rome, an actor and filmmaker, said that lost income as a result of the pandemic means she’s further burdened by pre-existing debt. “The unemployment I qualify for won’t even cover my rent alone,” she said. “People shouldn't be at home choosing between which bill should or shouldn't be paid, rationing, getting creative with diaper alternatives, because they know that having a roof over their head is a necessity.”

State Rep. Will Guzzardi (D-39th) also showed up to voice his support for the protesters. “(Pritzker’s) been a great leader in so many ways, but he has not yet done enough to protect people …. The moratorium on evictions in court is simply not enough. Evictions are still being filed in court despite the moratorium,” he said.

“I know it’s strange for me to be demanding the state government act. But right now the legislature isn’t meeting, so this is the best thing I can do, is appeal to the executive branch on behalf of all my constituents and the folks who are here to take some action and protect our renters.”

Asked for comment by the Herald, State Sen. Robert Peters (D-13th) said that he supports lifting the ban on rent control. “This pandemic has exposed the housing vulnerability of so many people,” he said. “Lifting the ban and letting communities take this action is the right thing to do.”

Well, the obvious criticism is not staying home but rather going out and protesting but will leave that one for a minute.

Once again rent/apartments/houses/is a private business, and there is a huge difference between rent increases and people paying no rent.

I am not heartless, as people who know me will readily a test. I think. But it seems that even Mac’s proposal to meet with each tenant on an individual basis and see if they have money/ see if they have means /see what their situation is /and act accordingly, was not good enough for the free rent folks.

I am not sure what the answer is but I know the “free rent “concept is terribly skewed.

I have a good friend, land lady, who just had four extra people move into her rented two bedroom flat.

So somehow this average income business woman who owns one house must pay for all the gas water rent etc. for people that she’s never met and has no idea who they even are?

Just doesn’t seem right, no more than if we suggested that everyone in Hyde Park with a spare room should let all these people into their houses the ones that want free rent.