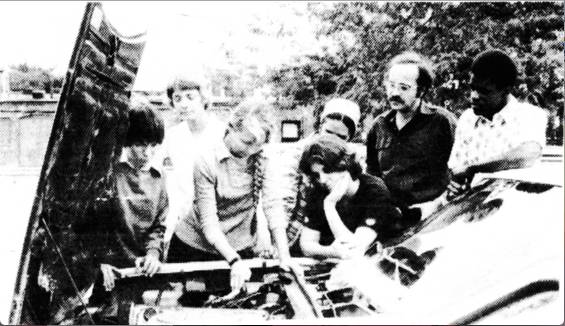 Hartman teaching the basics of auto mechanics in a parking lot off 55th Street in 1977. She taught an eight-week, Hyde Park Neighborhood Club-sponsored course that summer to five women and two men. (Herald File Photo)

Hartman teaching the basics of auto mechanics in a parking lot off 55th Street in 1977. She taught an eight-week, Hyde Park Neighborhood Club-sponsored course that summer to five women and two men. (Herald File Photo)

Allison Kate Hartman, a lifelong Chicagoan and Hyde Park fixture known for her career as an auto mechanic, lawyer and community activist, died on Nov. 13 from complications after a cardiac arrest. It was her 88th Birthday.

She was born in 1931 to James Lea, a medieval history professor at the University of Chicago, and Frances Cohn Cate, and she attended the Laboratory School and the U. of C., graduating in 1951.

Over the next decade, Hartman developed an interest in automotive mechanics and sports car racing, building a Formula Junior-class race car with her first husband, George Clowes. Her immersion into the racing community was ironic, considering her aversion to driving; she did not have a license for the last 60 years of her life.

In 1964, she and her second husband, James Hartman opened Hyde Park Auto service, which she ran until 1996, one of the first women in Chicago to operate an automobile repair shop. They competed on the Sports Car Club of America circuit until his accidental racing death in Elkhart Lake, Wisconsin, in 1966.

In the 1970s and '80s, she shifted focus to motorcycle racing, participating in dirt-track competitions around the country with her partner, John Millington, who survives her. Beyond her automotive interests, she was a strong advocate for self-defense, earning a Hakkoryu Jujutsu black belt in 1988. She was an accomplished bench rest target rifle-shooter, winning competitions well into her 80s.

After closing Hyde Park Auto Service, Hartman earned a criminal justice degree from Chicago State University and two post-graduate degrees from John Marshall Law School. She was reportedly one of the oldest people in Illinois history to pass the bar in 2006 at age 75, after which she practiced elder and real estate law until her death. She rehabilitated and restored several South Side buildings with her son, James Russel Clowes, who died in June.

Son, daughter-in-law and grandson Daniel, Erika and Charles Clowes of Oakland, California, survive Hartman, as does brother James L. Cate Jr. of Australia. She is also survived by her students and “adopted” children, Julie Orlinsky-Morgan of Chicago and Jesse Sensibar of Flagstaff, Arizona.

A memorial service will be held next spring.