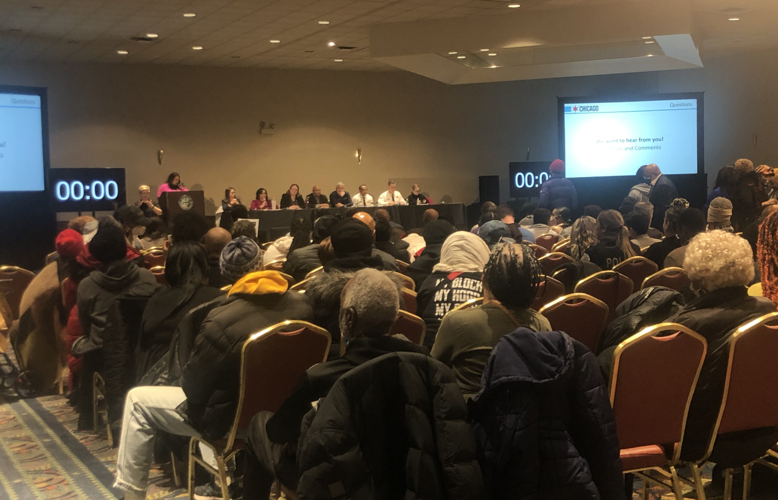 Woodlawn residents gather for a heated meeting with city officials about the Wadsworth migrant shelter on Thursday night, Jan. 12, at the Apostolic Church of God, 6320 S. Dorchester Ave. 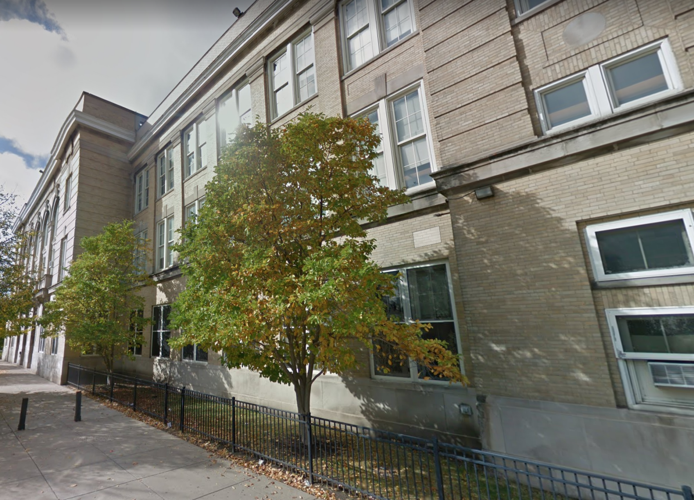 Woodlawn residents gather for a heated meeting with city officials about the Wadsworth migrant shelter on Thursday night, Jan. 12, at the Apostolic Church of God, 6320 S. Dorchester Ave.

After several delays of the city’s plan to house migrants in a repurposed Woodlawn school, hundreds of residents gathered for a community meeting last week to voice their frustrations and demand answers from officials.

During a heated two-and-a-half hour meeting Thursday night, Jan. 12, at the Apostolic Church of God, 6320 S. Dorchester Ave., city officials presented their latest plan for housing migrants, most of which are Venezuelan asylum seekers, at the vacant Wadsworth Elementary School, 6420 S. University Ave.

These plans were met with significant pushback from residents, who later in the evening took to the microphone — or raised their voices from the crowd — to express exasperation at the project’s moving ahead without community input and in a neighborhood many said the city has neglected for decades.

“This is beautiful, to go in and create a shelter for people … But what about the people who have been here for the last 20 years?” said Keith White, a 25-year resident of Woodlawn. “Why is it just now that (Wadsworth) is being fixed up?”

As of now, the city plans to start moving about 250 men and women into the school starting the week of Jan. 23. The school will be used for about two years, after which the building will be turned back over to Chicago Public Schools. There will also be a “progressive increase” of individuals housed at the shelter; the city does not yet have an official capacity limit.

(When the city first proposed this plan in late October, 20th Ward Alderman Jeanette Taylor — whose ward includes the shelter — reported that she was informed that the city was working to repair the building to provide accommodations to upwards of 500 people.)

Security contracted by the city will be on the premises 24/7, and an 11 p.m. curfew for those living at the shelter will instituted. Chicago Police Department officers will also check the building frequently, paying "special attention" to the campus, according to Roderick Watson, CPD's 3rd District commander.

He added that the campus’ parks and walking paths will remain open to the public and security cameras will be installed around the school’s vicinity.

As for supports, health care and mental health services, english classes and connections to support networks — such as faith-based organizations — will be provided to the asylum seekers by the city. Case management services will also be provided daily on site.

“Shelter is not the last step on the journey, we want people to go out into (other) housing, so we’re helping them work through that next step,” said Brandie Knazze, the commissioner for Chicago’s Department of Family and Support Services.

Since Aug. 31, more than 5,100 people have arrived in Chicago from Texas, as Texas Gov. Greg Abbott (R) buses migrants out of state in protest of federal immigration policies. Some asylum seekers have also begun arriving on busses from Colorado and another 1,500 have arrived independently.

The city has so far set up 14 temporary housing accommodations in decommissioned libraries, vacant schools, churches and park facilities across the city. But new arrivals are coming every day, Knazze said, and the shelter system is getting increasingly overwhelmed.

Plans for the Wadsworth shelter have been delayed several times since first announced in mid-October, when Ald. Taylor was informed that CPS spent $1.5 million on plumbing, heating and other rehab work at Wadsworth. On Oct. 25, the mayor’s office announced that there were “no plans” to use Wadsworth as a temporary shelter. Months later, on Dec. 28, Taylor reported being “blindsided” at a community meeting the city held in Woodlawn, where the mayor’s office once again said it was planning to use Wadsworth as a shelter; she requested more meetings to take place before people moved in. On Jan. 6, the mayor’s office announced that plans were once again delayed.

Over the last few months, many residents at Thursday’s meeting said, the city was not transparent about its plans nor did it seek community input.

“I know we didn’t get the ask right the first time before we came before you, and for that I am truly sorry,” said Knazze. “That oversight was a huge mistake.”

But many weren’t satisfied with just an apology and questioned the point of the meeting.

“Nothing I say here tonight is going to change anything, it’s been done,” said White.

Taylor spoke briefly at the beginning of the meeting, reminding the audience that: “it is not about ‘(migrants) versus us,’ because at the end of the day the system is mistreating all of us,” said Taylor. “This is about making sure that this situation that is being pushed upon us is safe for everybody.”

At the end of the meeting, she took to the podium again. “Folks do not want this in the community … and this conversation is not over,” she said. “To Mayor Lori Lightfoot, y’all are going to learn to listen.”