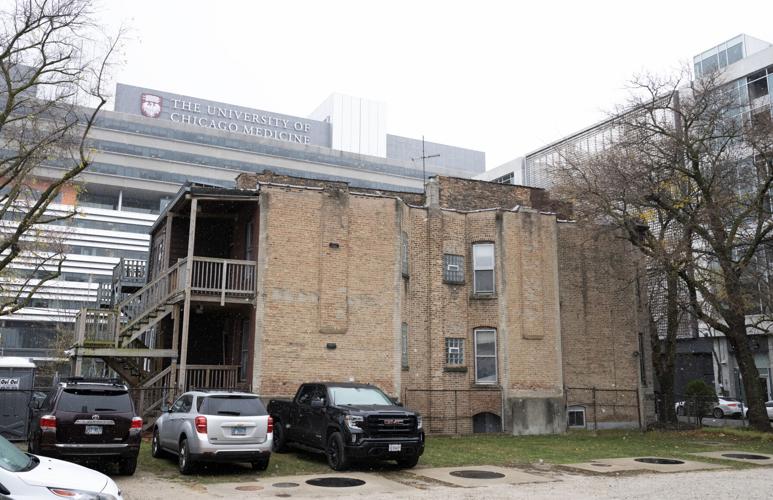 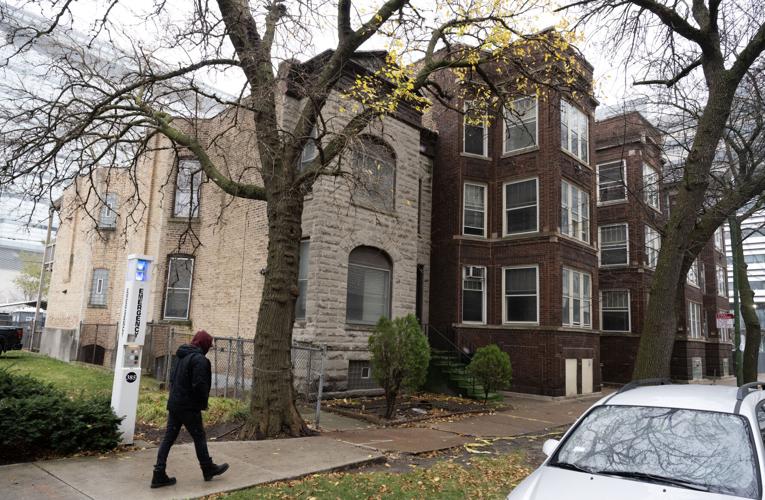 A lone island of residential buildings surrounded by the University of Chicago Medical Center is slated for demolition as the university moves forward with construction on its cancer center.

The buildings, a small greystone two-unit and two larger brick apartments, are located at 5627-37 S. Maryland Ave. They’re the last remaining residential structures in the area, and the latest to be torn down in the UCMC’s decades-long expansion.

In February, the UCMC announced plans to expand its cancer treatment capabilities with a new, $663 million center. Slated to open in 2026, the 500,000 square foot, 128-bed facility will be located on 57th Street between Maryland and Drexel avenues — bulldozing a few empty lots, parking lots and several small apartment buildings.

Soren Spicknall, a Pullman resident who photographs buildings slated for demolition, photographed the buildings after demolition permits were issued for the three properties on November 7.

“This set of three buildings is a physical manifestation of decades of change on this edge of Washington Park and this edge of Hyde Park,” said Spicknall.

Over the years, Spicknall has charted the slow progress of the medical center’s ad hoc expansion. “It’s been project by project, so that’s also why this set has stayed on so long,” he said. “The university (previously) hasn’t as aggressively wanted to move forward with the cancer center project.”

By the mid-2010s, there were five remaining residential buildings dotting the university’s medical campus.

In 2020, construction began on the $10 million High-Bay Research Building. A small, two-flat brownstone that stood in UCMC’s path at 5616 S. Maryland Ave. was purchased for $1.2 million and subsequently torn down. Then, earlier this year, another residential building at 5600 S. Drexel Ave. was demolished; the first leveled as part of the cancer center’s planned construction.

“The university has taken what were residential blocks… between essentially 56th (St.) and Ellis (Ave.), and 58th (St.) and Cottage Grove (Ave.),” Spicknall said.

Now, only the three at 5627-37 S. Maryland Ave. remain, two of which were owned by “prolific local landlord” Edward Lin. Though he “was insistent to people around him and also to its tenants that he would never sell,” Spicknall said, Lin sold his properties to the university in June 2021 for $10 million. (The third building, 5631 Maryland Ave. was already owned by the university.)

Ruthie Dworin, a 2021 U. of C. graduate who lived in the building located at 5627 S. Maryland Avenue for two years, recalls often hearing sirens and people wailing and crying in the street in front of the hospital.

She speculated that the majority of residents in the building were students or otherwise affiliated with the university.

“I’ve seen some people talking about the demolition of this building as knocking down more South Side housing to make way for more UChicago projects, and yes, but I don’t think this applies to this building in particular… because really they were functionally U. of C. projects,” she said.

Dworin said that she and her roommates had already decided to move, after their graduation in 2021, when they found out that Lin was planning to sell.

In total, the expansion for the center has now churned up a large portion of southwestern Hyde Park, on either side of 57th Street between South Maryland and South Drexel Avenues.

The trio of apartment buildings are quintessential Hyde Park dwellings; brick or stone multi-unit buildings that could be anywhere from a few decades to more than a century old. The smaller greystone dates back to the late 1880s and the two brick buildings to the early 1900s, according to lease documents from the Cook County Assessor's Office.

The UCMC Cancer Center is expected to break ground in 2023.

The U. of C. did not respond to the Herald’s request for comment.