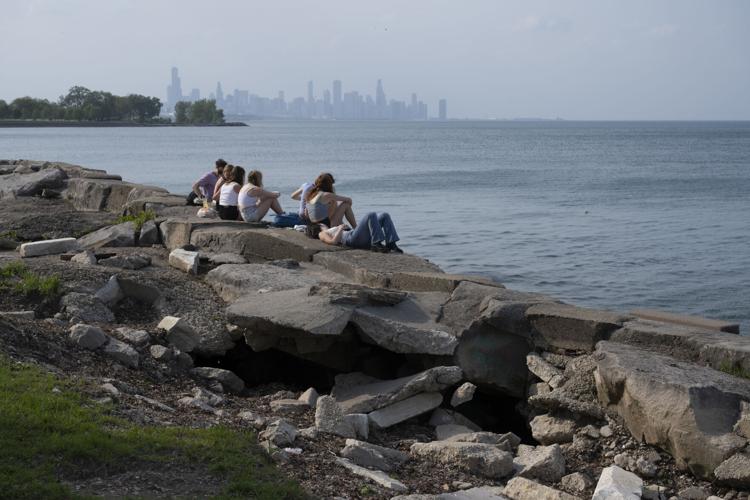 A group of second-year University of Chicago students sits on the capstones of a section of wave-damaged Promontory Point on Friday afternoon, May 20th. 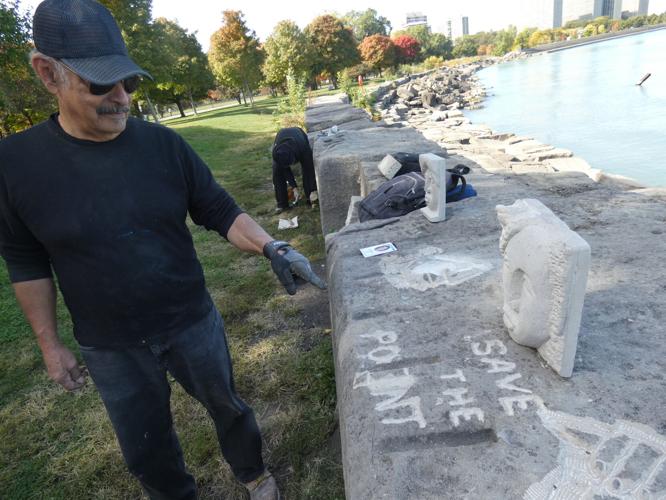 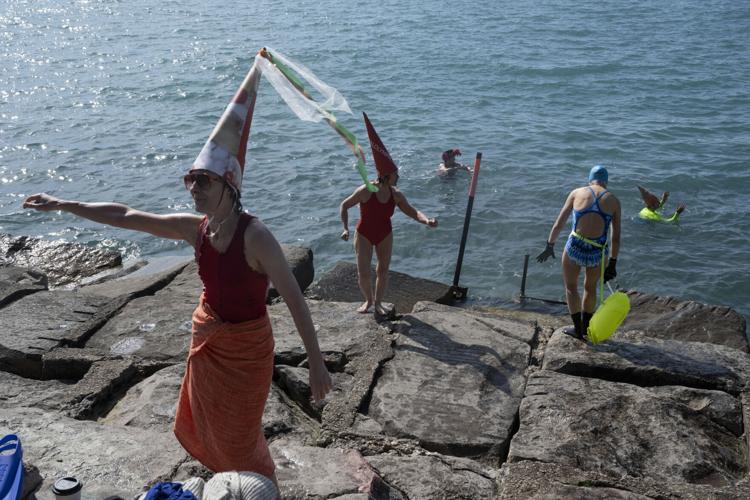 The first of several votes needed to secure city landmark status for the Point, the commission’s unanimous support for it at a Thursday, Jan. 12 hearing comes in the midst of a decades-long battle between preservationists and the city over what to do with the park’s limestone stair-step revetment.

For more than 22 years community members have organized around preserving the Point’s limestone steps from both lakefront erosion and city-proposed demolition. In the past, the city has proposed replacing the park’s stone perimeter with concrete and steel, as has been done along the rest of Chicago’s lakeshore; these proposals have routinely been met with considerable pushback.

Official landmark status is still pending a final commission vote and approval of the full City Council. If it passes, a landmark designation will require that any proposals by the city or Army Corps of Engineers to rehabilitate the Point’s revetment, field house and other historical features will first need to be approved by the commission.

“There was overwhelming support by the commissioners for preservation of the limestone revetment,” said Promontory Point Conservancy President Jack Spicer after Thursday’s meeting. “Alderman Hairston (5th) was outstanding in her support for what the community wanted and she was very clear in her words to the Park District to not screw this up.”

According to Kandalyn Hahn of the Chicago Department of Planning and Development, a final landmark vote could occur by March or April, before the end of Hairston’s tenure on City Council. Meanwhile, a preliminary designation also means that all of the protections of landmark designation are in effect until this vote.

The Promontory Point Conservancy, a nonprofit focused on preservation advocacy, grew out of community member’s Save the Point campaign in the early 2000s. Over the years the conservancy and other activists have made several unsuccessful bids for city landmark status.

This time around, in the month leading up to Thursday’s hearing, community members sent the commission more than 400 letters urging committee members to grant landmark status, drawing considerable public and media attention.

"The motion carries unanimously,” said commission chair Ernie Wong after Thursday’s vote (and some applause). “Folks, there you go — 22 years.”

Landmark status inches forward, but the devil’s in the details

Though all eight commissioners voted in favor of preliminary status, the hearing brought a heated discussion between city officials and Point preservationists about the details of the park’s repairs.

Conflict was primarily focused on the city's previous proposals and draft plans to replace the limestone with concrete, and the extent to which neighbors will have input on a new restoration plan.

One such old proposal, which comes from the mid-1990s Chicago Shoreline Protection Project, was developed by the U.S. Army Corp of Engineers and city agencies. More than $380 million in federal funds was used to redesign and reconstruct eight miles of the city shoreline, though the Point was ultimately cut out.

This plan, and other subsequent proposals by city agencies, fall under the designation of a “locally preferred plan” by the Army Corps, the federal body that will ultimately oversee the bulk of restoration.

The classification, activists argue, is significant because the recently passed 2023 defense bill requires that the federal government fund 65% of a “locally preferred plan” for renovations to the Point. The city will pay for the remaining 35%.

Hairston echoed these concerns: “Within the past couple of years, we have been excluded from conversations and decisions have been made (about the Point) ... If (restoration) is to be done in anything other than limestone, it is a no go for the community.”

Pushing back, Daniel Burke of the Chicago Department of Transportation and Heather Gleason of the Park District said the version of the locally preferred plan cited by Spicer and Hairston is no longer being pursued.

“Can we stop discussing 2005? Let's put it to rest," Burke said. “We’re committed to a plan reusing the existing limestone, and doing it as part of a rehabilitation that will be consistent with the Secretary of Interior’s standards for historic preservation.”

Though the city does not have an official and public plan for the Point in place, in 2019 the Park District entered into a contract with the design firm SmithGroup to create a report "providing design and engineering services for the development of the first phase of a Lakefront Strategic Action Plan," which includes Promontory Point. This report has not yet been made public.

Looking back, looking ahead

Promontory Point, sandwiched between 54th and 57th Streets, was first conceived in the 1890s by urban planner Daniel Burnham. Its construction — and the addition of limestone blocks — was overseen in the 1930s by famed landscape architect Alfred Caldwell. Opening in 1937, the Point was federally funded and built by the Works Progress Administration, one of President Franklin Roosevelt’s most popular New Deal programs.

In the 1960s, however, portions of the revetment were beginning to erode; its steps were becoming uneven. In 1965, a concrete platform along the park’s eastern edge partially replaced stone blocks. Erosion continues; only partial repairs have been made since.

In 2018, amidst preservation advocacy efforts, the Point was successfully listed on the National Register of Historic Places. As such, the National Historic Preservation Act requires review by federal agencies of any proposed designs before construction.

So what’s next for the Point? According to the Army Corp’s Promontory Point project manager Michael Padilla, the federal agency, Park District and CDOT are preparing a press release outlining the next steps for the park project; it will be issued before the end of January.