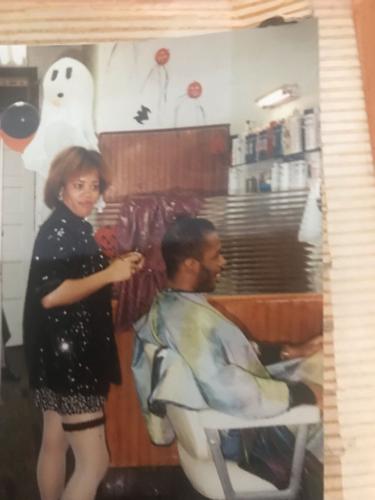 Paula Johnson with a customer during a Halloween party. 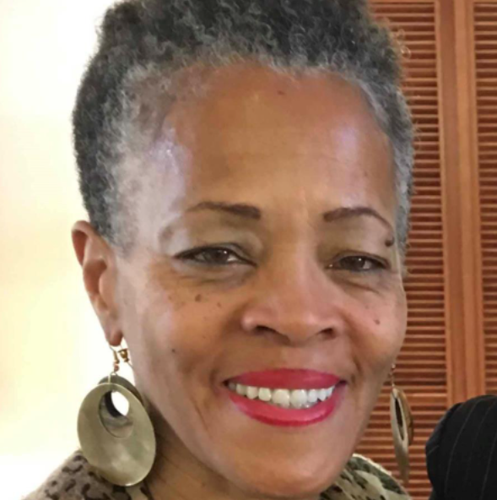 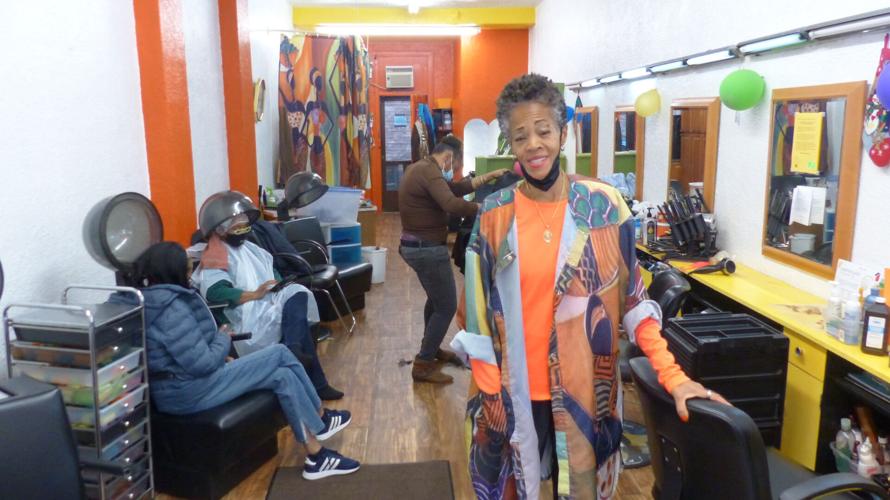 Paula C. Johnson (center) shortly before retiring this past December.

Paula Christine Johnson, a Hyde Park fixture and the longtime owner of Divine Creators Beauty Salon along 55th Street, died on April 18 at the age of 68.

David Johnson, her younger brother, said the cause was lung cancer.

Paula was born on August 26, 1953, to Elbert and Dolores Johnson in Robbins, Illinois. One of 11 siblings, she attended St. Benedict Elementary School in Blue Island and Calumet High School in Auburn Gresham.

She was a practicing Catholic, first at St. Peter Claver Church in Robbins and then at Saint Sabina, 1210 W. 78th Place, where she remained a member for more than 50 years.

As a young adult, during a period when many of her friends were being laid off, Paula became set on running her own business. She started beauty school in 1977, working her way through salons on the South Side before landing a job as a beautician at Stylist Beauty Salon, 1637 E. 55th St., in 1987.

She took over the business in 1991 and renamed it Divine Creators “because she wanted to pay homage to God,” according to a note from her family.

“The location was very important to me, and Hyde Park has always been a community environment where the people support the community,” she told the Herald in January, days after she closed her doors. “They supported the businesses and, you know, they just wanted small businesses to make it.”

Paula was proud of the fact that she became the first Black person to own a business between Cornell Avenue and Hyde Park Boulevard. She forged close relationships with the salon’s clientele — she was also fond of the 55th Street pedestrians, who would regularly stop and wave to her through the storefront window.

To show her appreciation, Paula hosted an annual picnic in Harold Washington Park for her customers and the rest of the neighborhood. “I would supply all the sides and they could bring their own meat, and I had people to cook it for them,” she said in January. “We played all kinds of old-fashioned games. And I also fed the homeless. Anybody who wanted some food, they were able to eat.”

She lived for a while in the South Loop, and loved Lake Michigan, Navy Pier and riding her bike along the lakefront trail. During the COVID-19 pandemic, she began taking computer classes.

David Johnson, her brother, described her as a warm, generous person. (In January, Paula recalled the culture shock she felt when she first moved to Chicago as a 13-year-old in 1966. “When I came to the city, people were so cold.”)

“Even near her passing, we would take food over there and she’d say ‘Share the food, everybody sample everybody’s dishes.’”

David Johnson said that Paula kept her illness a secret. When she retired, she told others, including the Herald, that it was because her rheumatoid arthritis had worsened.

“We were kind of suspecting something was wrong, but we didn’t probe,” he said. “Even her best friend, she waited, because she didn’t want her to be heartbroken and cry over it.”

“She always had an incredible amount of faith, and it was just unbelievable,” he said. “People walked past her window and waved. People will walk by and find out she no longer owns it and be surprised.”

She is preceded in death by her parents and her siblings Marie, Regina and Stephen.

A note of remembrance from Paula Johnson's family

For 33 years, Paula had a successful Hyde Park business, becoming the first Black person to own a business between Cornell and Hyde Park Boulevard. She began working at Stylist Beauty Salon as a beautician, then worked her way up to owner. When she took over the business, she changed the business name to Divine Creators because she wanted to pay homage to God.

Paula exemplified her faith through her kind and charitable actions — from her annual picnics feeding all who were hungry, to gifts for the less fortunate, to offering natural remedies for ailments — she encouraged and demonstrated love for her people, her community. When you came around Paula, she had to give you something — food, clothing, herbs, advice — whatever she sensed was needed.

She loved her family. She often teased her brothers that each of them was her favorite. And her twin, Paul, wants everyone to know that Paula was the youngest (and the bossiest). Paula would tell Paul to never tell his true age because she said when he told HIS age, he told HER age and that wasn’t right! And Paula especially loved Turan, her only child. She said her biggest regret was not spending enough time with him. And during the last few months of her life, Turan was by her side day and night, laughing with her, caring for her and surrounding her with love.

Paula loved to laugh and she loved to eat! First soul food, then vegan food, then ALL food, whatever looked good at that moment. Eating and organizing were what she loved to do. And now that Paula is up there in heaven, you know she’s up there organizing — messing with the temperature, reorganizing the prayer list, and putting names on different color cards.

You are Forever In Our Hearts, Paula