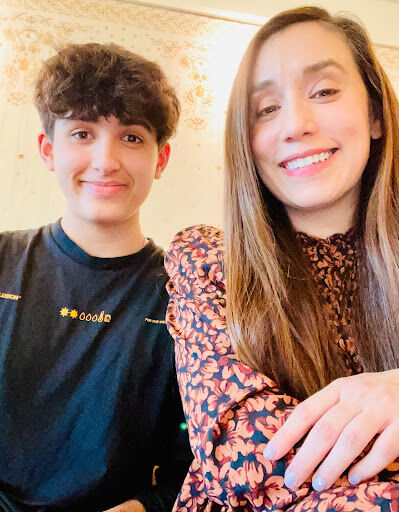 Hyde Park Refugee Project volunteer Nadia Abbas (right) is acting as an interpreter, among other tasks, with the newly arrived Afghan refugees. She is joined by family members including her 16-year-old son, Behram Shah. 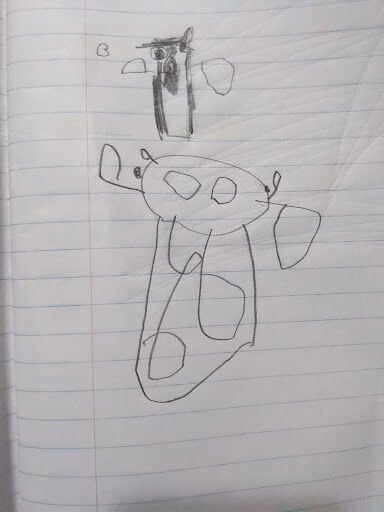 The youngest of the newly arrived refugees has produced several versions of this drawing.

The Taliban takeover of Afghanistan three months ago left thousands of people, both native and foreign, fearing for their lives. On news and social media, people were consumed with worry about the safety of Americans and Afghans living and working inside the country.

In the last days of August, civilians packed Kabul Airport, hoping to make their way onto a military airlift. Random violence abounded, including a pair of suicide bombings at the airport that killed more than 150 Afghans and 13 U.S. troops. And while many Afghans were left behind, some 123,000 people made it out.

It was a few days before Thanksgiving when the first refugees arrived in Hyde Park. The Afghan family of five had managed to get through an airport, from which they were evacuated to Fort McCoy in Wisconsin. After several months’ wait, they were resettled here through the combined efforts of Refugee One — an international resettlement agency — and the local volunteers who man the Hyde Park Refugee Project (HPRP). The locals plan to welcome a second Afghan family this week.

The latest arrivals are the ninth family of foreign refugees brought here by HPRP since its inception in 2015. Immigration restrictions during the Trump presidency made resettlement difficult to accomplish. But with those restrictions lifted, the Hyde Park group now plans to scale up its  operation. Fundraising goals — met so far without difficulty, due to the popularity of the mission — will multiply.

There has never been a shortage of neighborhood volunteers. But at a moment like this one — five human beings on the doorstep who have virtually no possessions, no familiarity with American culture, no family or friends on this continent, and no ability to communicate in English — the burden of caring falls largely on the shoulders of a few Hyde Parkers who are able to put in the long hours needed to function as a surrogate family.

This time around, many of the shoulders belong to Nadia Abbas, her mother, her husband, or one of her two teen children. Abbas and her Pakistani mother are especially well qualified: They can speak Pashto and Dari, two of the three languages most used by Afghans. (Additional volunteers who can speak Pashto, Dari or Farsi are eagerly sought.)

Abbas is a social worker in the trauma center at UChicago Hospitals. Alongside her colleague Anna Zonderman she has been involved with HPRP for years. But this is the first opportunity to use her knowledge of Afghan language and culture, gained from her Pakistani parents and the seven years she spent attending medical school in Peshawar.

Her son, Behram Shah, is 16. He started working with refugees earlier this year at HPRP’s summer camp. He tutored second-graders in English, and loved it. Now he’s thrilled to be playing with the Afghan kids. They run to greet him and immediately draw him into a game. It’s nonverbal and requires quick reflexes.

Despite what the children have been through, “They’re so positive,” Behram said. “They just want to have fun. They’re a blast to hang out with.”

The locals plan to welcome a second Afghan family this week.

Abbas joined in with her son. “They’re already picking up English words. They’ve enjoyed discovering what we eat here. Pizza is a big favorite. And donuts.”

The resilience of children is especially remarkable in refugee families, according to Abbas. “They become acclimated more quickly than adults.”

“They’ve tried out the swings in the park. They discovered a scooter: They love scooters! They definitely have a need for speed.”

Even before the pizza and the park, there were pads of paper.  And pencils, and crayons. Some of the first communications between the families took place in the language of coloring. And the youngest, described as a “bubbly, happy child," has presented her hosts with multiple versions of the same drawing.

The child’s parents, as adults facing almost unfathomable challenges, are probably still recovering from the shock of all that’s transpired in a few brief months. There is also worry and grief for family and friends left behind. As a volunteer, Abbas said, “We’ve lost a lot of sleep ourselves” during the hubbub surrounding the family’s arrival. “I can only imagine how they are sleeping. I can see that they’re happy to be here, but they’re still adjusting.”

Though there are many ways to help, the great need of the moment is cash to sustain the new arrivals as they begin to find their feet on Chicago soil. Before long they will be placed in schools and jobs. Perhaps, like two of the refugee families who settled here earlier, they will eventually earn enough to buy a house in the suburbs. Perhaps, like others, they will become active participants in Hyde Park’s civic organizations.

But first things first. Learning English is among the first and highest hurdles. Don’t be surprised if the children take the lead.

HPRP is affiliated with the Hyde Park-Kenwood Interfaith Council, which supports many humanitarian projects in the neighborhood. These range from climate-change activism to international peacemaking teams to the sandwich-making line at the United Church of Hyde Park (the sandwiches are distributed to homeless people by the Night Ministry). They include the food pantry at Hyde Park Union Church, and the long-established soup kitchen at Kenwood United Church of Christ, 4600 S. Greenwood Ave., which provides an abundance of services. Lunch is served there four days a week, and the latest initiative is offering hot showers to people who don’t live with that luxury.

You can donate here to support the many projects under the Interfaith Council umbrella.

To support the Refugee Project specifically, use this link.

Hyde Park contains some wonderful people including those with many l language skills.