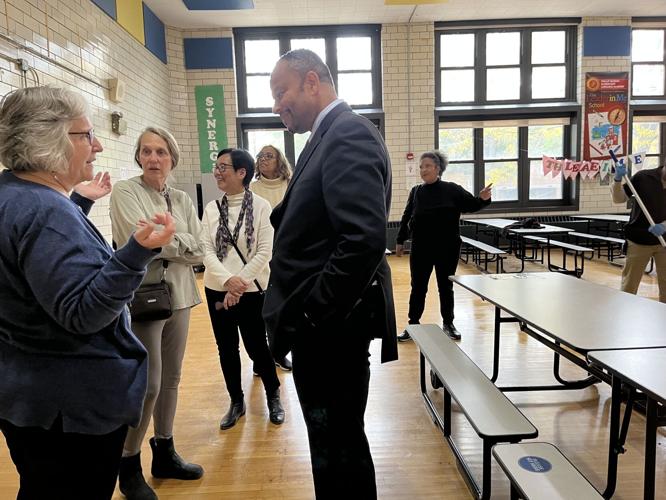 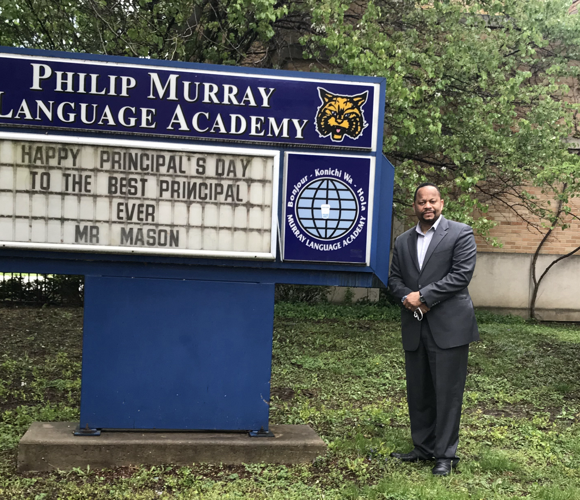 After 30 years in education and 15 years as principal of Murray Language Academy, 5335 S. Kenwood Ave., Greg Mason is ready to retire. As he wraps up his tenure and prepares to step down at the end of June, the search for a new Murray principal is well underway.

At 59 years old, Mason said of the decision, “I just started thinking about family, thinking about my wife … the retirement would allow for me to spend more quality time with family.” He also has two grown sons, a police officer and lawyer, who live in the area.

“I feel like I have a lot of energy left,” Mason said. “I thought, I would love to try to create this bucket list and start traveling with my wife and go places and see different things around the country, and certainly the world.”

Over the years, Mason’s interest in education grew. He started working as a counselor for Roosevelt University’s Upward Bound, a college preparatory program, in 1990, completing his teaching certificate in mathematics there two years later.

In 1992, Mason began teaching math and coaching chess after school at George Washington High School, a CPS school. Over the next eight years he also taught at Bowen High School and Whitney Young Magnet High School, where he became the math department chair. During this time, Mason also worked towards obtaining his master’s degree in school administration from the University of Illinois Chicago, which he finished in 1996.

He took on an administrative position at CPS in 2000, working on its magnet cluster program for math and science schools. He returned to working in schools in 2005, taking on the role of assistant principal at Miles Davis Magnet Academy in Englewood.

In 2008, Mason was appointed Murray’s school principal by its Local School Council (LSC). When he took the reins, Mason said he did so knowing that he was succeeding several longtime and well-regarded principals, such as Virginia Vaske and Michael Keno, and strove to maintain the culture and the curiosity of students they had cultivated.

“Murray was (already) an amazing school… I just jumped on a train that was already moving,” he said. “ I wasn’t trying to steer it in certain directions; I was trying to understand the train, trying to contribute to the train.”

Reflecting on his tenure, Mason said he is particularly proud of the partnerships that Murray fostered with the University of Chicago and Purdue University. Together the institutions created tutoring programs that bring college students into Murray; the elementary school also routinely hosts U. of C. students to talk about their research projects.

He also spearheaded outreach efforts that helped increase Murray’s student enrollment last year; the only elementary school to do so in Hyde Park.

But his tenure was not without some rough patches: In 2010, he was at the center of the debate surrounding the dissolution and reinstatement of grades seventh and eighth at Murray. In 2012, he was criticized by parents for suspending teacher Lincoln Brown for using a racial slur in class, and again in 2016 for firing well-liked assistant principal Rhonda Butler, who was reinstated days later.

“Over the course of my career I have always reflected on my final decisions. Although each decision may have been final, I continued to cycle them through a learning loop to improve my decision leadership,” Mason reflected. He added that he hopes he improved over his time at Murray.

Mason said he also “got some amazing experiences” while at Murray. He was chosen by the Japanese Chamber of Commerce for a two week trip through Japan to observe the country’s schools, and later was selected for a similar two week trip through China via the Chinese Bridge Delegation and the College Board. Mason was also invited to participate in the Cahn Distinguished Principals Fellowship, a professional development program for principals through Columbia University’s Teachers College.

Something of a hobby archivist, Mason was diligent about preserving a number of Murray documents, from news articles to photographs, detailing the school’s almost 70 year history. He keeps these materials in drawers in his office, among them a signed letter from Michelle Obama and the original newspaper clipping documenting the dedication of the school to Phillip Murray, former president of the United Steelworkers of America.

Before leaving Murray, Mason said he may donate some of these documents to the Hyde Park Historical Society for public use.

Since his retirement announcement in November, the Murray Local School Council (LSC) has been searching for its new principal. The council, composed of parents, community representatives, teachers, a non-teacher staff member and a student representative, is now in the process of vetting candidates for the four-year contract position.

Members of Murray’s LSC could not be reached for comment.

Though he will not be involved in the selection process, Mason said, “We have a very smart Local School Council and I know they’ll ask the right questions.”

Mason does hope that the next person in his role will understand that they can grow and add to the school, without feeling like they need to reinvent the wheel.

“Murray is not broken. Murray doesn’t require fixing,” he said. “That’s exactly what I tried to do in my 15 years.”

Mason said he does not want any fanfare with his departure, because “Murray has given me all that fanfare over the years … I just want to say goodbye (to) everyone.”