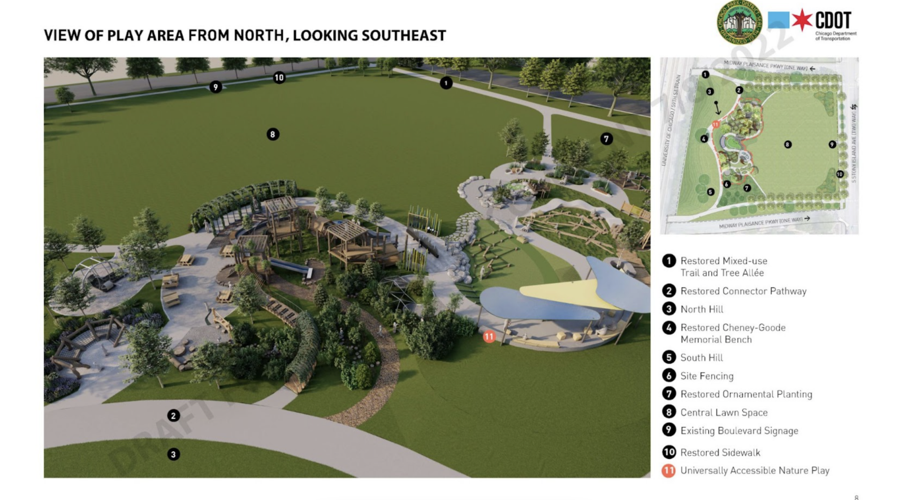 A slide from the Midway Plaisance East End Improvements Draft Plan, which is up for public review as of July 8, 2022. 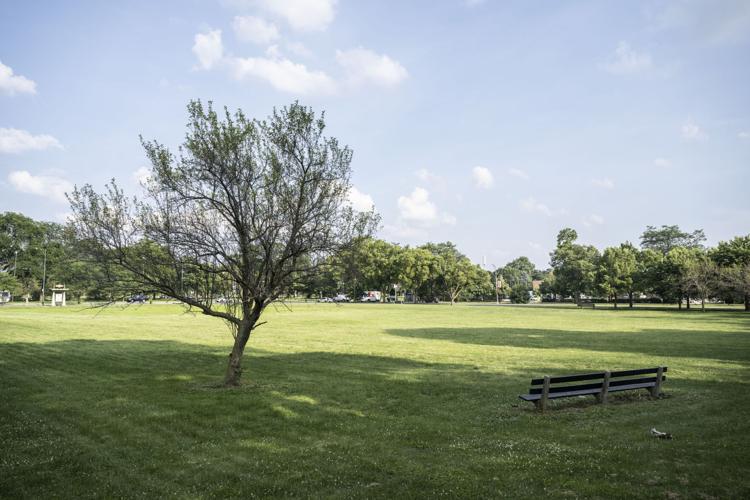 A view to the southeast across the portion of the Midway Plaisance that lies east of the Illinois Central/Metra Tracks and west of S. Stony Island Ave. Taken July 9, 2020.

On July 8, the Chicago Park District initiated a 45 day review and comment period for the proposed redesign  of the east end of the Midway Plaisance.  Members of the public will have until August 22 to submit comments on the design of a new play area and the park’s landscaping.

The Midway’s redesign was triggered by the construction of the Obama Presidential Center (OPC) in Jackson Park. Because the OPC converts a section of Jackson Park from recreational use to non-recreational use, appropriate replacement land must be found somewhere else, according to the Urban Parks and Recreation Recovery (UPARR) Act of 1978.

The design review process for Midway Plaisance was mandated by the Memorandum of Agreement (MOA) that was negotiated during the federal review process for the OPC. As part of this process, the Park District held three community meetings earlier this spring and summer at which it presented a variety of conceptual designs for the play area and solicited comments on those proposals from the public. The last of these community meetings was held June 21, and the design submitted for review last week is the Park District's response to those comments.

At the center of the redesign is the new play area, which will offer a “universally accessible nature play space,” as well as activities like a tree-top adventure course and forest maze, according to the draft for review. Installing the playground— in what many residents have called a wetland —involves regrading the field to allow for better drainage. Other landscape elements include restoring the Cheney-Goode memorial bench and paving a north-south connector pathway.

One of the issues brought up during the Park District's May 3 public meeting on the project was access to the site by people with disabilities, particularly from vehicles. It was suggested by a community member at the May meeting that a "drop-off space" be provided. The submitted design does not show a drop-off space.

Following the 45 day review period, a fourth community meeting on the project will be held by the Park District in late September or October (no official date has been set). The design will then be submitted to the Illinois State Historic Preservation Office (IL SHPO) for a formal review.

Construction of the play area will not begin until the IL SHPO has determined that the design is consistent with the rehabilitation requirements of the Secretary of the Interior’s Standards for the Treatment of Historic Properties that address compatible new additions.

Standard 9 states that "New additions, exterior alterations, or related new construction shall not destroy historic materials that characterize the property. The new work shall be differentiated from the old and shall be compatible with the massing, size, scale, and architectural features to protect the historic integrity of the property and its environment."

Standard 10 states that "New additions and adjacent or related new construction shall be undertaken in such a manner that if removed in the future, the essential form and integrity of the historic property and its environment would be unimpaired."

Members of the public, signatories and concurring parties to the MOA may submit their comments on the design during the 45 day comment period (ending Aug. 22) here.

This plan is suspect, more smoke and mirrors. We are supposed to get make up land. Instead, we see an existing Park suddenly being declared "make up land". Why weren't vacant lots in Woodlawn ever considered? The vest-pocket Park on Cornell just North of 55th St. was a vacant lot - until local residents, not the Park district - made it a Park.

Why not vest-pocket Parks on vacant lots, in Woodlawn, now owned by the City?

This 'plan' seeks to add in all manner of gimmicks, and in the end, we end up with that much less Park. It looks like five pounds of manure in a three pound bag. Too much, packed into an open vista. On Olmsted's 150th birthday, this - is how we honor him.

A sad day for our Parks, and another blow to the preservation of historic places.

It should be investigated if it is a wetland. If so, it shouldn't be changed in any way since if is part of Olmsted's south park design. Land to replace the 19.3 acres wasted on OPC should be replaced by buying private property, not by taking more park or public land.