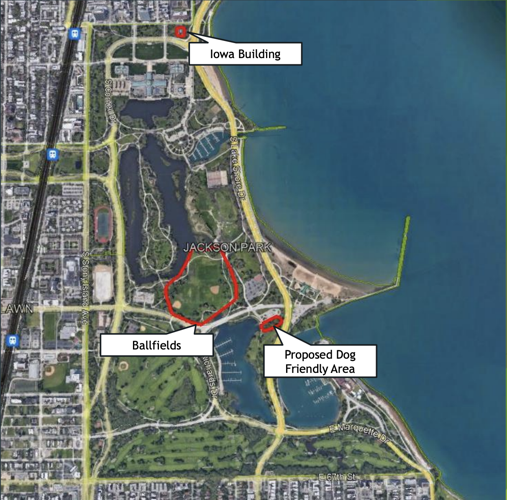 A map showing the sites of the three new projects proposed for Jackson Park and presented at a Nov. 29 meeting.

A rendering of the "pinwheel" configuration of the proposed baseball fields in Jackson Park. 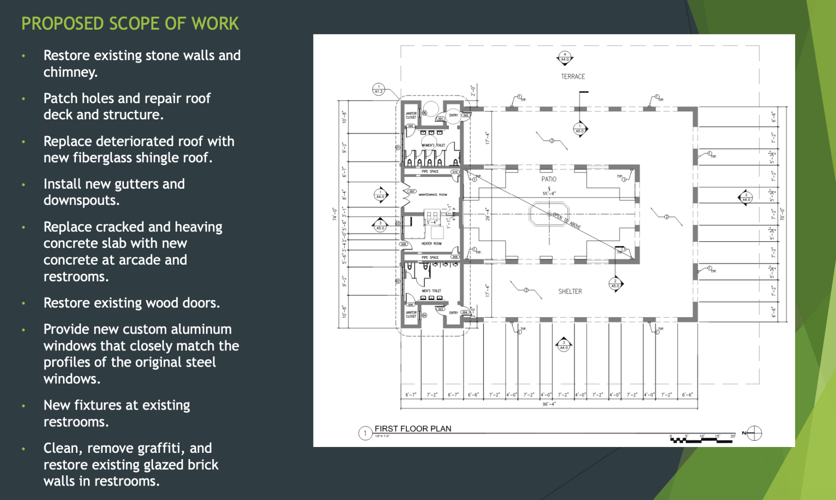 City officials presented initial plans for renovation of the Iowa Building and construction of new baseball fields and a dog-friendly area (DFA) in Jackson Park at a Nov. 29 virtual meeting hosted by Ald. Leslie Hairston (5th) and the Chicago Park District (CPD),

The three projects, which are scheduled to begin construction in the spring of 2022, were included in the South Lakefront Framework Plan finished in 2018, noted Heather Gleason, CPD Director of Planning and Development.

"It was a 10-month-long process that included 13 community meetings, 24 smaller stakeholder meetings, and we had actually over 2300 attendees and 650 comments,” she said.

As reported by the Herald, state Sen. Robert Peters (D-13) announced a $625,000 grant for the projects from the State of Illinois Open Space Lands and Development (OSLAD) Program in January 2020. The CPD will provide a matching grant of $625,000 to move the projects forward.

The Iowa Building is a pavilion located in Jackson Park just southwest of the intersection of 56th Street and S. South Shore Drive. The pavilion was constructed in 1936 by the Works Progress Administration and has not been maintained for years. In 2014 it was the site of the shooting death of 34-year-old Ovadiyah Chandler.

Gleason said that the community engagement process for the framework plan resulted in a strong recommendation to renovate the Iowa Building as a picnic pavilion.

To that end, Gleason said the CPD is proposing to create an ADA-accessible concrete path to the north side of the building from 56th Street, restore the building's planters, repair the stone walls of the fountain in the building's center and of the building itself, add lighting, do other utility upgrades, replace the roof with a new shingle roof, completely redo the bathrooms and more.

As is the case for all three projects, the plans for renovating the Iowa Building will need to be reviewed and approved by the Illinois State Historical Preservation Office (SHPO), given the state funding for the work.

"They are in need of a little TLC," said Walther, adding that “the two fields are not in compliance with American Disabilities standards."

Ald. Hairston then questioned the presence of a few proposed berms in the design for the ball fields.

"I would like to have a conversation about not having the berms, especially if they're not going to be preserved or maintained," said Alderman Hairston. "I am also concerned about people with mobility issues, you know, trying to navigate around there," she added.

Walther said he would take Hairston’s comments back to the design team.

Walther then moved on to discuss the proposed new DFA.

"Jackson Bark, as it has been commonly known, is currently located at the tennis courts south of the 59th Street Harbor. The new Dog Friendly Area, which I'm sure will also be referred to as Jackson Bark, will be located south of the parking lot along Hayes Drive," said Walther.

Walther said that CPD has two different designs for the area that will be presented to the community. Each of the two DFA designs encompasses roughly 18,800 square feet, but differ in terms of the design elements created especially for dogs.

Walther also addressed equipment currently being used in the extant Jackson Bark, which is an unofficial dog park.

"I know in previous discussions, there was a strong desire by the local dog group to keep some of the existing equipment from Jackson Bark and (move it) to the new location. So, we have an area of the new DFA where we will relocate some of those pieces of equipment."

Schematic designs for new baseball fields and DFA and renovation plans for the Iowa Building can be seen here: https://assets.chicagoparkdistrict.com/s3fs-public/documents/departments/Capital%20%26%20Planning/Framework%20Plans/Jackson%20Park/Jackson%20Park%20OSLAD%20Projects%20Community%20Meeting%20PP.pdf

As the meeting continued, a survey of participants regarding the two proposed designs for the DFA was presented to meeting attendees. Of 18 people who were able to take the survey, nine responded. Their preferences were about evenly split between the two designs.

The CPD has provide a link for comments on its Jackson Park Improvements web page here: https://www.chicagoparkdistrict.com/jackson-park-improvements-comments

"Once we have (agreements), both from the community and from the State Historic Preservation Office, we will finish the design," said Gleason.

"We will be required to (get) Lakefront Protection Ordinance approval," said Gleason, referring to the excavating necessary during construction of the new ballfields and of the DFA.

Asked about the possible relocation of elements of the existing Jackson Bark, Todd Agosto, creator of the unofficial dog park, said, "It's unacceptable. Why are they moving us? We have the dog park we want. It's a great example of what community can be doing. It's green, a good example of reuse. We have more amenities and safety features than any park in this city. We are the best park."

Both of the Park's bathrooms have been closed for years. The golf course shelter building is fenced-off, nearly collapsed. The Darrow bridge has been closed, going on many years. I think this plan wastes money, better spent elsewhere. Consider Jackson Bark, the Park's dog-friendly area. It is by far the Best dog Park in the City. It is run by volunteers, They want to 'shoe-horn' a new dog Park adjacent to 63rd St. harbor - but this location has hazards the present location doesn't. So, too this 'Iowa Building', and I'm wondering what will happen with that. Why are we building these expensive items, while routine maintenance in the Park goes ignored? Mr. Monaghan, please run a picture of the golf-course shelter; a picture is worth a thousand words.