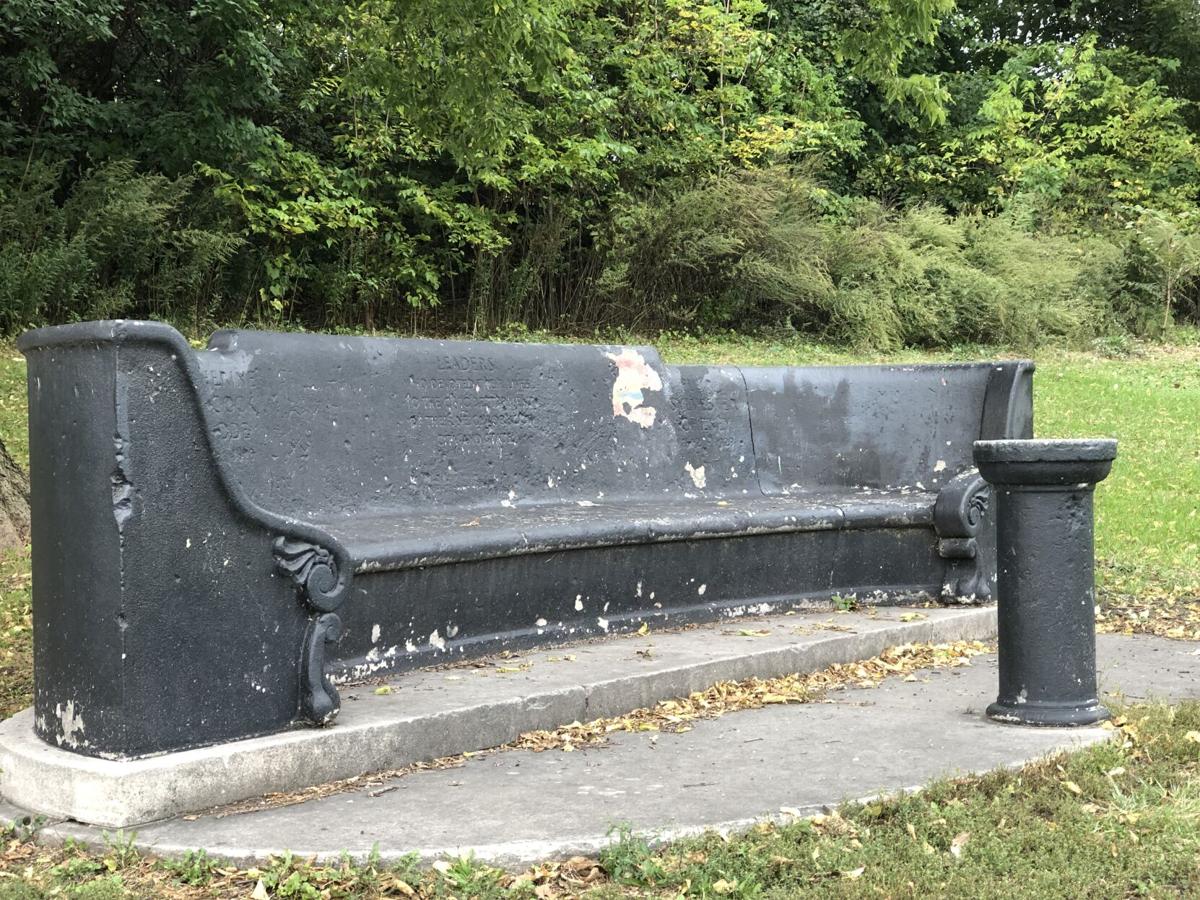 Cheney-Goode Memorial bench at the east end of the Midway Plaisance. 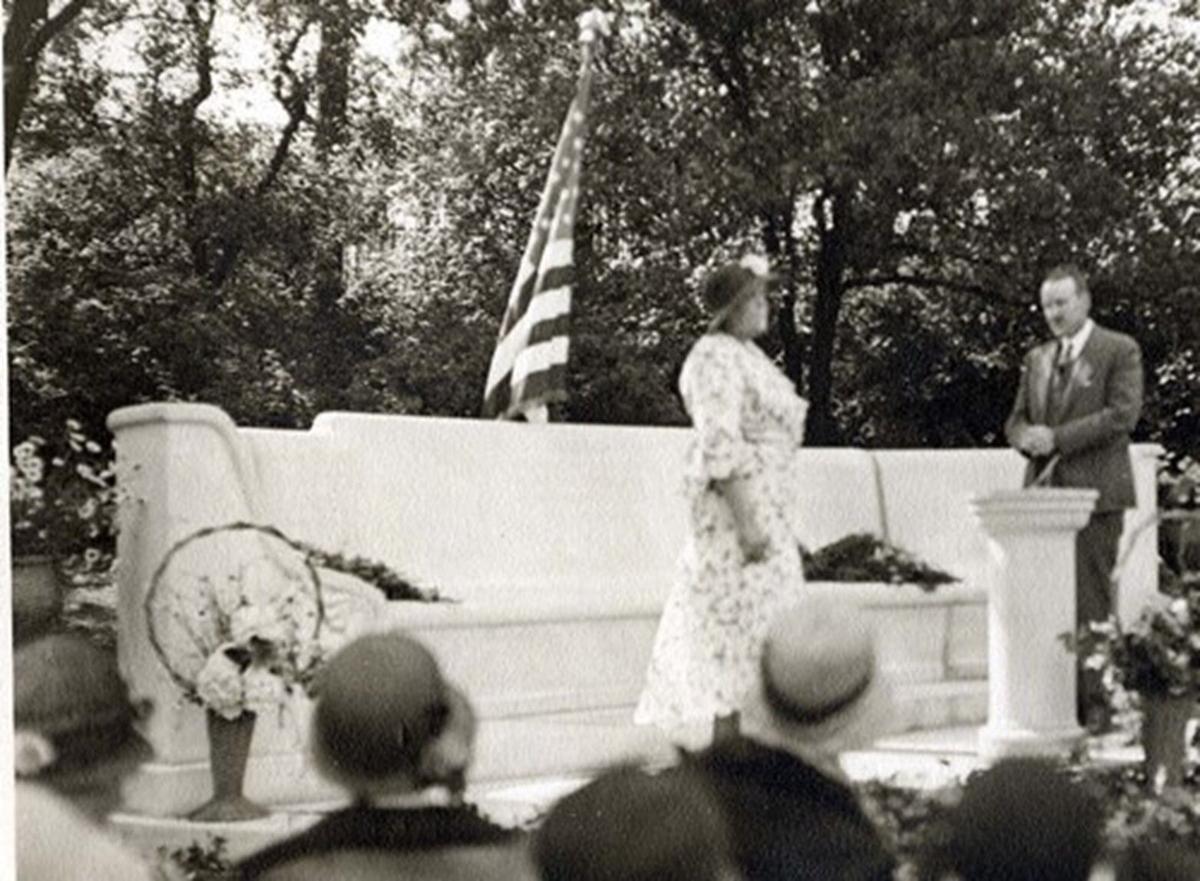 The Chicago Park District dedication ceremony for the bench in 1932. 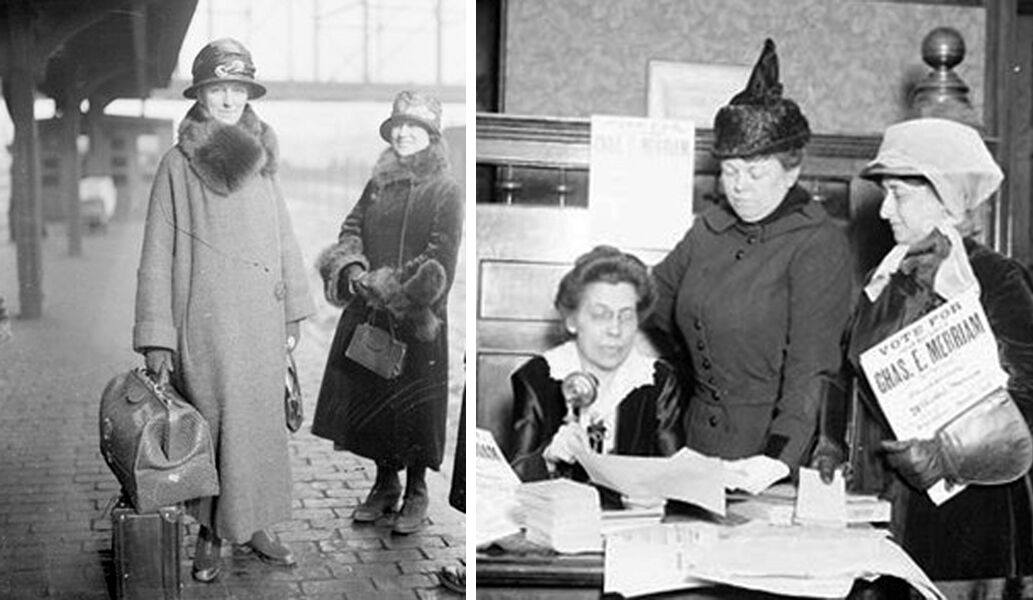 Patricia Morse is a historian and Hyde Parker. She’ll combine the two avocations in her new series for the Herald, looking into the past of everyday objects around the neighborhood. If you see something new or familiar you’d like Patricia to explore, send her a message at hydeparkquestions@gmail.com.

The bench tucked under the railroad embankment at the east end of the Midway Plaisance is easy to miss. The grey paint is chipped and faded, the inscription weathered. It’s just possible to trace the words: “Leaders who devoted their lives to the civic betterment of their neighborhood, city, and state; Katherine Hancock Goode 1872-1928; Flora Sylvester Cheney 1872-1929.” For decades, the bench was the only monument to actual women in a Chicago park. Who were Goode and Cheney, and why do they have a bench?

They were a team for women’s rights and civic improvement. Cheney was the shrewd campaign manager, Goode the charismatic public speaker. They were once nationally renowned. They were two of the four Illinois women placed on the national League of Women Voters honor roll, joining women like Jane Addams and Susan B. Anthony.

Illinois was a hotbed of women’s suffrage. Women organized clubs in every Illinois legislative district. By 1913, they got the vote for statewide offices. When the 19th Amendment passed Congress in 1920, Illinois was the first state to ratify it, beating Michigan by an hour. Women then reorganized as the League of Women Voters, a nonpartisan force for fair elections. The first state to form a League chapter was Illinois, and the largest chapter in Illinois was Hyde Park/Woodlawn.

Katherine Hancock Goode moved to Chicago (6227 S. Kimbark Ave.) in 1903 when her husband, the geographer J. Paul Goode, came to teach at the University of Chicago. She joined the Political Equality League, which taught classes on politics, law and economics and organized marches and petitions to improve conditions for women.

Goode traveled the Midwest with a speech called “Let Women Mind Their Own Business” to persuade hesitant women to join the fight for better education, housing, and sanitation. These, she argued, had always been women’s concerns. She was effective, as the Rock Island Argus reported: “Mrs. Goode in her charming, simple, motherly way, held her audience so completely that although the hour was unusually late, not a move was made except in giving the applause.” Goode realized that creating change meant legislation. Cheney became her campaign manager, and Goode won her election in 1924. Goode brought the number of women in the legislature up to four. When the four were sworn in, Goode said “We women are not a political accident. We are a political incident.” She fought for the eight-hour day, women on juries, and better conditions for incarcerated women.

The Tribune gave an account of her time there: “Amid sweat and tobacco smoke and slithering and bluff and bellow and browbeating and fawning and bombast and some booze, hundreds of millions are being legislated away…. Amid the heart-sickening hullabaloo, …. a woman rises from her desk—Representative Katherine Hancock Goode….The hour is late, the heat cruel, and Mrs. Goode must be weary, but she meets an emergency gallantly. The member who was to have spoken on the bill (to move Cook County jail)…is found to be—and here I speak literally—'in no condition to speak.’ Mrs. Goode must speak for him. She does, and she speaks well….She knows what she is talking about and so is brief. Her words are well chosen, she is applauded.”

Goode ran unopposed for re-election, but influenza came to Springfield. Eight legislators, including Goode, died within months of each other in 1928. Cheney stepped in to complete her friend’s second term.

Flora Sylvester Cheney was a teacher in Wisconsin when she married Henry, who was a graduate of the University of Chicago Medical School. They soon moved to Chicago (6041 S. Kenwood Ave.) where Henry became a prominent physician. Flora Cheney had Hodgkin’s lymphoma, which had no treatment, but that didn’t stop her. She launched community organizations and suffrage campaigns. She was the first president of the Illinois League of Women Voters, editing and writing the newspaper. In her articles, she made clear that the vote wasn’t an end; it was the means to create change. When the Tribune called the League “doomed” because no one wanted nonpartisan reform, Cheney insisted, “We shall succeed.” Later, Cheney organized several political campaigns in addition to Goode’s. One of them was for the reform mayoral candidate William E. Dever. He won in 1923 but lost in 1927 to famously corrupt Big Bill Thompson. She also was involved in Charles E. Merriam’s campaigns for alderman, including his final, unsuccessful run in 1917. He lost the primary by five votes. The Herald called Cheney “a shrewd and powerful campaign manager” who made the most of limited resources.

Cheney’s re-election was supported by progressives like Lorado Taft and Jane Addams. Her opponent, Mrs. William Fetzer, while claiming to be a friend of Katherine Goode, was the candidate of Big Bill Thompson’s machine. Cheney handily defeated her but, exhausted, succumbed to Hodgkin’s in 1929. She served less than a year, but she had put forward a bill to establish a commission to reform elections by tossing out 100 contradictory pages of laws that suppressed the vote. In her honor, the legislature passed the Cheney Act, producing the very outcome Thompson had tried to prevent.

A committee looked for a suitable memorial. The square on the east end of the Midway was central to their legislative district, empty, and visible. A gleaming limestone bench and sundial there would remind passersby of the women who gave “to the limit of their endurance.” The committee pictured it as the focal point of a memorial garden dedicated to Goode’s and Cheney’s “righteous indignation against special privilege and the exploitation of the helpless.” The bench was dedicated in 1932, but the Park District never planted a garden, the sundial was soon stolen, and the bench disappeared under the dark paint used to cover graffiti.