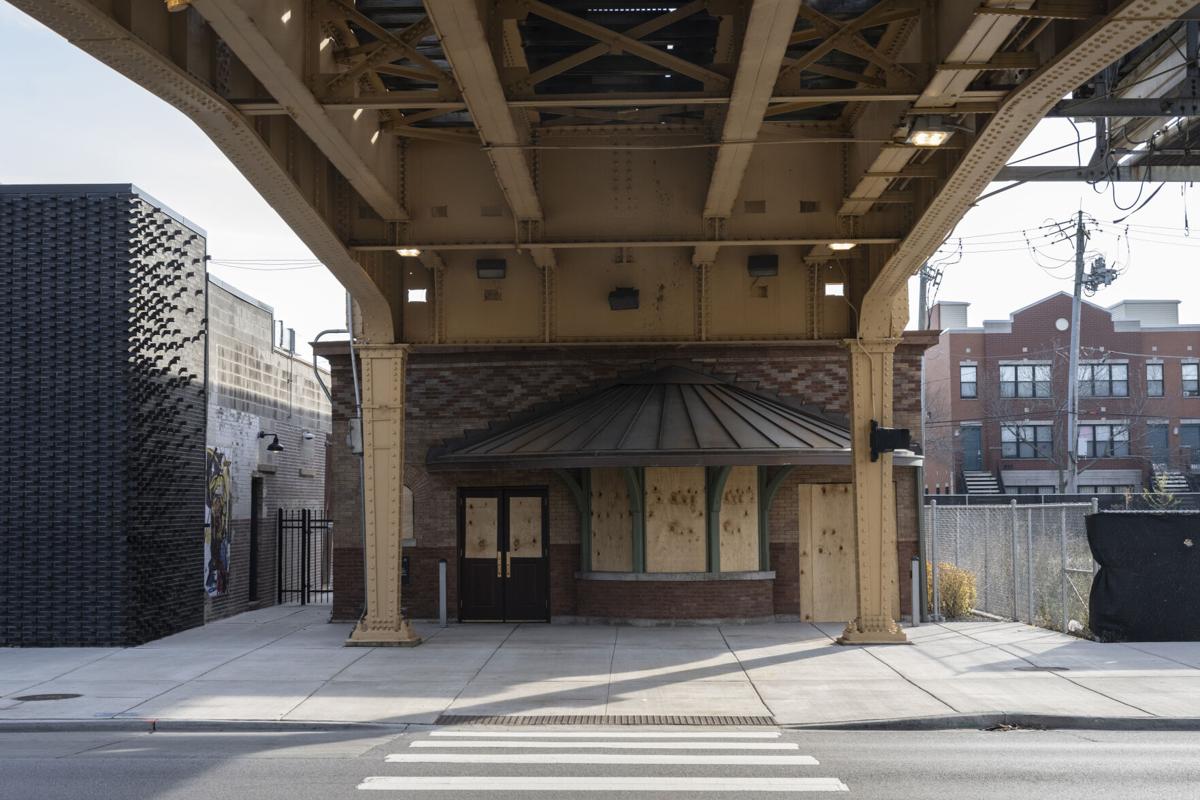 A view toward the south of the renovated Garfield 'L' Station from Garfield Boulevard taken Dec. 3, 2020. The station house windows are temporarily boarded up due to vandalism.

The Chicago Transit Authority (CTA) won a “Preservation Excellence” award from the Commission on Chicago Landmarks for its restoration of the original Garfield Green Line ‘L’ station house in Washington Park.

“The restoration is a stunning example of historic preservation,” said Commissioner Ernest Wong at a Nov. 17 meeting of the Landmarks Commission. The Green Line station renovation was one of nine preservation projects to win the award.

The restoration project was part of the $43 million renovation of the Garfield Green Line station completed in 2019. Earlier this year, the University of Chicago opened a business accelerator in the space.

The original Green Line station was built in 1892, a year ahead of the World’s Columbian Exposition. Part of the city’s first rapid transit line, it was built to ferry passengers to and from the fair. “The station house consisted of one large room with an attendance booth, a newsstand and a concession booth,” said Wong. “A gatekeeper allowed passengers entry through the rear doors leading to an elevated platform.”

The exterior of the station house itself was mostly made of terracotta brick, with rough brick on the upper portion of the wall creating a diamond pattern. A curved wooden canopy, flanked by wooden doors, is supported by ornamental green brackets.

The old station house was closed in 2001, replaced by a more modern structure across the street. That same year, it also became a city landmark, affording it protection from demolition.

In 2016, Sen. Dick Durbin (D-IL), Reps. Bobby Rush (D-1) and Danny Davis (D-7), and then-Mayor Rahm Emanuel announced that they had secured a $25 million federal grant to make improvements to the Garfield Green Line station that would include a restoration of the old station house.

At the Landmarks Commission meeting, Wong described the process of renovation undertaken by McGuire Igleski & Associates, the architecture firm contracted to restore the building to an approximation of its original condition.

“Before the exterior walls could be assessed, layers of paint needed to be removed. They were balancing removal with gentlest possible treatment of masonry,” he said. “There was heavy staining, and additional treatment was incorporated to clean it. Sandblasting had eroded the face of the brick and sections, (but) the masonry was retained to the greatest extent possible.”

Ald. Pat Dowell (3rd), whose ward contains the project, said, “This is a very important CTA station in the heart of Washington Park. I want to thank CTA for their investment and the federal government, Senator Durbin, Congressman Rush and Davis for their support.”

Marlise Fratinardo, a senior project manager with the CTA, quoted a Chicago Daily Tribune article describing the scene a few days before the dedication of the Columbian Exposition: “One may stand on the platform and look over the rural scene, whose picturesqueness is heightened by the beautiful boulevard which to the east curves gracefully and is lost in a wood of sturdy young oak trees over the tops of which rise the domes and roofs of the World’s Fair buildings.”

Update: This story has been updated to include a new photo and additional information in a previous photo caption about why station house windows were boarded up this week.