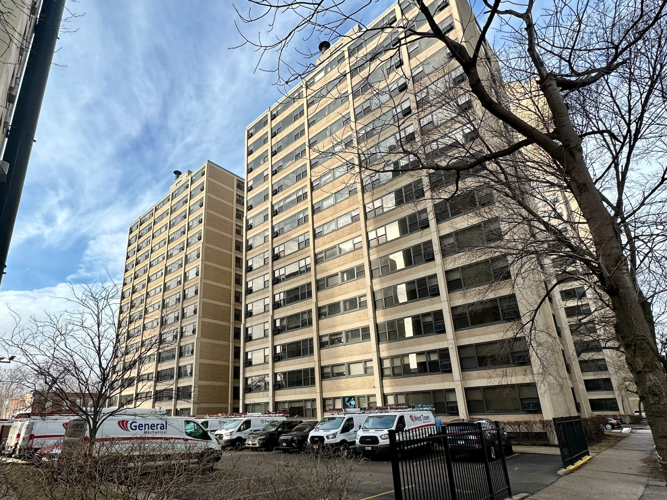 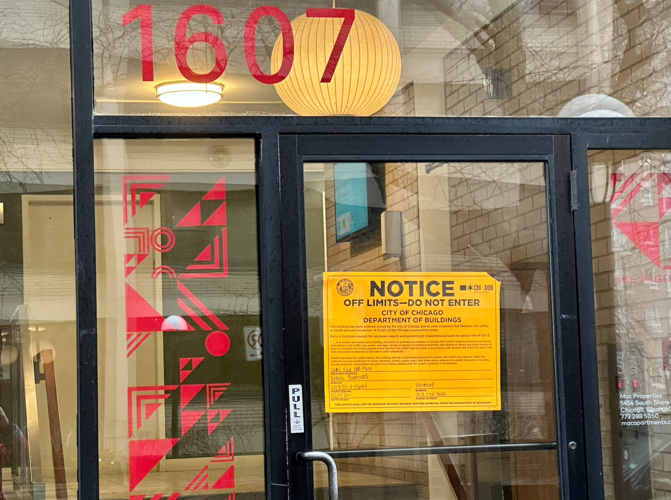 A Department of Buildings closure notice on one of the affected Algonquin Apartments buildings, 1607 E. 50th Place

The power failure occurred on Friday, Dec. 23, during the sub-zero holiday cold snap, knocking out the two towers’ water, heat and electricity. The buildings were shut down, and 181 tenants were evacuated by the Department of Buildings (DOB) on Saturday evening, Christmas Eve due to a “lack of heat emergency.”

According to the DOB, Mac’s earlier, unpermitted electrical work, which installed dozens of window heating units in 1607 and 1617 E. 50th Place, overwhelmed the utility’s electrical system causing the ongoing outage.

“The increased electrical demand was the primary cause of the power outage as, again, the units and outlets installed without a permit cannot be adequately supported by the existing electrical system,” said DOB agency spokesperson Michael Puccinelli.

“Life safety issues are always the top priority of the Department of Buildings ... Our thoughts are with those impacted and displaced by these power outages.”

Mac did not respond to request for comment as to why the permitting was not obtained.

The DOB is referring the matter, and other code violations found during its subsequent inspection of the impacted properties, to the city’s Department of Law.

Puccinelli said the electrical work consisted primarily of Mac switching the buildings' heating mechanism from two basement boilers to the individual window units. According to emails obtained between Mac and its utility, Commonwealth Edison, the first window units were installed in another Algonquin building in 2021 as a pilot. Last year, units were installed in the complex’s remaining five buildings, including 1607 and 1617 E. 50th Place.

Following the pilot, Mac and ComEd have different stories as to whether the utility had been informed of this planned increase.

ComEd spokeswoman Shannon Breymaier said that, though the utility and Mac communicated regarding the pilot, ComEd was not informed of the subsequent installation in the remaining buildings. Because of this, the utility was not prepared to handle the increased electrical load.

“(Mac) had replaced two basement boilers … but failed to contact ComEd to upgrade their service to ensure the ComEd equipment could accommodate the increased load demand,” Breymaier said. “ComEd is currently working closely with Mac Properties buildings to engineer and upgrade the service capacity to meet the new energy loads of the buildings.”

Technicians have been working to restore power and repair the buildings’ damaged infrastructure, such as frozen pipes, since the outage.

Asked for comment, Peter Cassel, Mac's director of community development, said, “(Regarding) the statement from ComEd, we respectfully disagree. We choose not to share internal verification documents among us (Mac Properties), our contractors, and ComEd in public. We kept ComEd apprised of everything we were doing at these buildings including sending an electrical load letter in November of 2021. Rather, we choose to continue to work collaboratively on finding a solution for the 137 displaced households.”

Regardless, Mac did not file for permits with the DOB. Cassel additionally did not say why Mac did installations without a permit and why Mac installed an electrical system that the buildings could not handle.

After the power went out on Dec. 23, ComEd and Mac worked to restore it, but the DOB ultimately issued an emergency order to close the buildings due to lack of heat and light on Dec. 24. Lighting was restored that evening, but the buildings remain without heat. The units’ heat cannot be restored without causing another power outage, Puccinelli said.

He added that Mac is working with contractors to repair its system, though there is no timeline for reopening the building.

DOB inspectors also discovered numerous other violations after inspecting the properties, Puccinelli said, which are going to be forwarded to the Chicago Department of Law for possible enforcement through the Circuit Court of Cook County.

"The city will seek all available legal remedies to assist affected residents as part of the pending court cases," Puccinelli said.

Meanwhile, 181 tenants have been without access to their units for the last two weeks, and without answers from management as to the cause of the failure and their buildings’ fate.

When the power and heat initially went out on Dec. 23, Mac reported that tenants were provided a warming bus and access to the lobby of next-door Regents Park, 5035 S. East End Ave. within a few hours. According to ABC7 Chicago, however, many residents also sought alternate accommodations themselves, some choosing to sleep in their cars on a night with subzero temperatures.

After the city shut down and evacuated the buildings on Christmas Eve, Mac began housing the residents of the 137 affected occupied units in Hyde Park hotels and other company-owned apartments during the crisis. Mac also said the company will reimburse affected tenants who had sought their own accommodations.

This week, Mac announced that tenants will not be expected to pay their January rent, and have been given the choice to relocate to another Mac apartment in the neighborhood or terminate their lease agreements. As of Jan. 3, a quarter of tenants have moved into a new Mac unit or terminated their leases.

Hannah graduated from Columbia College Chicago in 2019. She has previously written for In These Times Magazine, WBEZ and South Side Weekly.

I hope these residents are safe and get the housing and necessities they need. I am also happy that the Herald is still reporting these types of stories. We need journalism that speaks for the working people, tells our stories and identifies corporate wrongdoing and incompetence.