An overview of the Morgan Shoal Revetment Reconstruction Project plan from a May 18 meeting of the Public Building Commission. 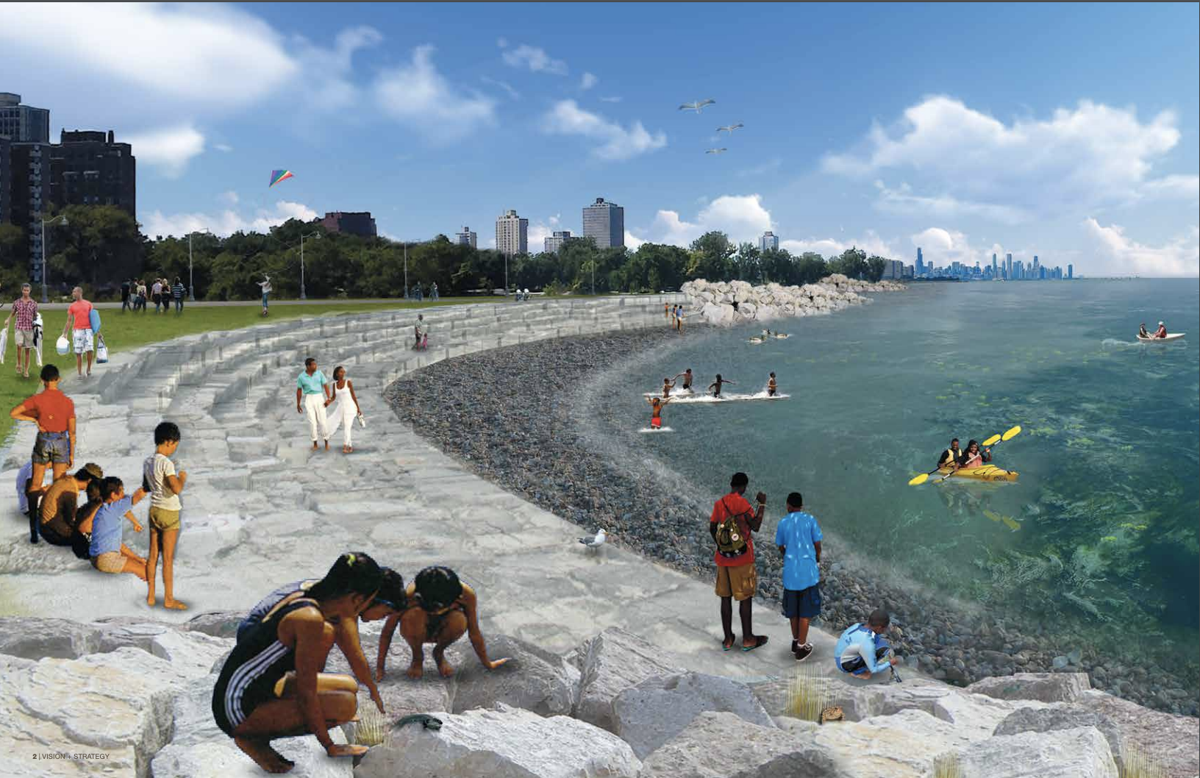 A rendering in the 2015 Morgan Shoal Framework Plan.

Morgan Shoal, the stretch of the South Side lakefront between 45th and 51st streets, is about to be redesigned and reconstructed by the Chicago Public Building Commission (PBC) in collaboration with the Chicago Park District (CPD), the Chicago Department of Transportation (CDOT), the U.S. Army Corps of Engineers (USACOE) and other agencies.

It has been six years since the CPD finished the Morgan Shoal Framework Plan, and now the actual work of fulfilling the goals of the Framework Plan is moving forward with the Morgan Shoal Revetment Reconstruction Project. The project will add 7 acres of parkland to Burnham Park, which, according to a presentation at a May 18 PBC meeting, will transform “a narrow strip of parkland into a rich and vibrant place for the community and wildlife alike.” The additional park land is being added largely between 48th and 51st streets lakeward, providing a buffer for Lake Shore Drive from winter storms and high lake levels.

The construction costs for the project were estimated to be between $30 million and $50 million, according to the May 18 presentation. Overall funding for the project was outlined in Mayor Lori Lightfoot’s 2021 five-year capital plan presented in November 2020. Lightfoot’s plan includes a total five-year budget for shoreline work of $77.2 million, with $71.7 million going toward design and construction of the Morgan Shoal work. (The plan also includes $2.5 million for Promontory Point design work, though no construction will occur until the Morgan Shoal project is finished.)

The project design team will be appointed by the PBC Board of Commissioners at their July 2021 meeting; design and engineering plans are scheduled to be completed during the 3rd quarter of 2022, and the project will be issued for bid in the 4th quarter of 2022; construction would commence thereafter.

Temporary emergency repairs on this stretch of the lakefront necessitated by high lake levels and storm damage were completed by the USACOE, CDOT, CPD and the Metropolitan Water Reclamation District (MWRD) in late May of this year.

The PBC held a virtual informational session on May 18 for firms that wish to provide architectural and engineering services for the Reconstruction Project.

During the meeting, the PBC advised interested firms of the project’s details and of the details of the submission requirements and process. Submissions are due June 10.

Sarah White, project manager for the Chicago Park District (CPD), discussed the history of the development of the Framework Plan, which she said serves as a “kind of a blueprint for the ultimate finished project.”

“The Park District worked really closely in collaboration with the community a number of years ago to develop the Morgan Shoal Framework Plan,” added White.

The 2015 Framework Plan was developed by the Park District, the consulting firm Smithgroup JJR and involved three public meetings in the fall of 2014 and the winter of 2014/2015.

According to Vasile Jurca, a civil engineer with the Chicago Department of Transportation (CDOT), who spoke during the information session, the Reconstruction Project is located between 45th and 51st streets along a portion of the Lake Michigan shoreline that is approximately 4,900 feet in length.

In his presentation, Jurca reiterated that community involvement was key to the development of the Framework Plan and said, “We would like to continue the success of the public engagement process with additional public meetings and outreach” during the Reconstruction Project design.

“The revetments originally constructed (in the 1920s) were made of stone blocks in the shape of steps, sitting on top of wood piles,” said Jurca.

“The current preferred solution revetments mimic this look, but updated with concrete instead of stone, and steel piles instead of wood piles,” added Jurca.

Describing the new park as a “canvas” upon which amenities could be placed, Jurca noted that the Reconstruction Project would include a reconstructed Pebble Beach (a popular area for swimming at 49th Street before it was inundated by current high lake levels), a large lawn area overlooking the lake, picnic areas and additional connecting trails.

The Reconstruction Project is subject to review, overview and permit approval by many different agencies, including the USACOE, the Chicago Plan Commission, the Illinois Environmental Protection Agency, the US Coast Guard, the Illinois Department of Transportation, the Illinois State Historic Preservation Office (SHPO) and others.

In an email to the Herald, a representative of the SHPO wrote, “With regard to Morgan Shoal, the U.S. Army Corps of Engineers (USACE) initiated a project to temporarily stabilize the area (in advance of a permanent solution) in March 2020. The Illinois State Historic Preservation Office wrote a letter to USACE March 11 indicating that the temporary work they proposed would not be an adverse effect.”

“No scope of work for the permanent project has been submitted to SHPO by USACE at this time. If work proceeds in a manner that was not approved during the consultation process, the agency must submit the change in scope to the SHPO for review and reengage in consultation.”

CDOT spokesperson Michael Claffey stated that the design for the Reconstruction Project will be reviewed by SHPO.

The initiation of the Reconstruction Project came as a bit of a surprise to at least one advocacy group.

Juanita Irizarry, president of Friends of the Parks (FOTP), said, “Friends of the Parks has not been approached by the Park District to comment on this project. FOTP supports efforts to mitigate shoreline erosion. But the particulars of this project seem not to have been well publicized and it seems to be moving forward too quickly to allow robust communication with and response from the community.”

The Morgan Shoal Framework Plan can be seen here: https://www.pbcchicago.com/wp-content/uploads/2021/05/FINAL-MORGAN-SHOAL-GLOSSY-REPORT-March-2015.pdf

The PowerPoint for the PBC information can be seen here: https://www.pbcchicago.com/wp-content/uploads/2021/05/PPT_PBC_LAL_EORInformationalSessionMorganShoreline_20210518.pdf