A mural, painted in purple, green, and orange, depicting five drum players, a trombone player, a dove, galaxies, the African continent, and the names of Yoruba gods, appears on the side of a brick three-flat near 54th and Drexel. Chiquita Mahon and her husband Babalawo Afonja own the home and commissioned the work from the famous deceased muralist Rev. C. Siddha Weber, a leader in the Black Arts Movement.

Inside, the couple performs Yoruba divinations, offering advice to clients through consultations with ancestors and Yoruba gods. Afonja’s first name, Babalawo, is an honorary title for diviners in the Ifa tradition, a subset of the Yoruba faith that is historically practiced in Nigeria, Togo and Benin.

Mahon and Afonja, whose birth name is Bobby Binion, are both in their late sixties and recently completed a 3D-animated film inspired by Yoruba divination called “The Babalawo Detective Agency.” They have been promoting it with a billboard at the corner of 47th Street and Indiana Avenue, as well as on posters in the windows of the Valley of Jordan Convenience Store and Sid’s Clothing and Hats on Roosevelt.

Conceived in the noir vein, the film follows Babalawo Afonja (as himself) attempting to solve the crime of Miss Anderson’s (played by Mahon) stolen ring.

Afonja mixes typical detective work — consulting men with their ears to the street, extracting information from sources — with spiritual consultations. Before he can begin his investigation, he offers kola nuts to deities, who then come to visit him in a vision. Afonja’s granddaughter Kylie Binion voices one of the deities, and tells him to sacrifice a big fish. The other god tells him to avoid using weapons. Having gotten their blessings and advice, Babalawo goes on to deal with tough crews of police officers and murderers.

Mahon and Afonja said they attended Harold Washington Community College in order to learn the 3D animation techniques required to make the film.

“The story came to me in a dream,” said Afonja. “And ever since, I been dreaming about this movie, dreaming for more than ten years. I said to ‘Quita this year, we gotta do it.”

Afonja and Mahon have been recording endorsements of the film from their grandchildren, as well as various friends from Afonja’s childhood. They vouch both for the quality of the film and Afonja’s character. 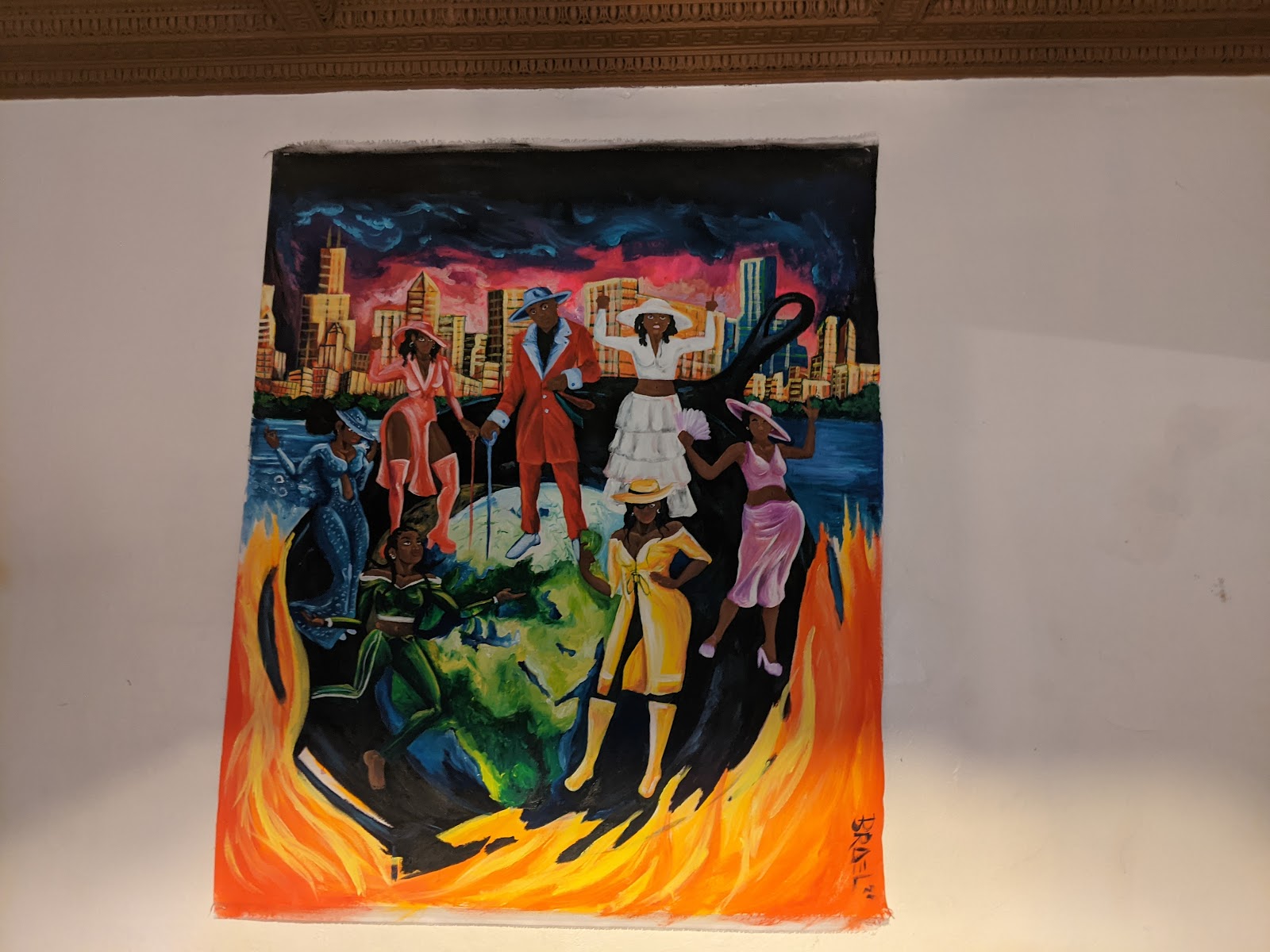 “I grew up with this brother playing basketball,” says a man named Yolanda Collier, in one video. “He was left handed. Wasn’t half bad.”

Afonja asks a man “When you’re in town, or in another town, what do you usually do?”

“I look for the Babalawo Detectives!” the man replies. “And I’m waiting for part two, three, and there’s gonna be a four!”

There will be sequels and prequels, Afonja and Mahon say. One prequel already in the works is called “The Skillet.” It concerns the earlier part of Afonja’s life. He is candid in saying it concerns his past as a pimp.

He commissioned a movie poster for “The Skillet,” which hangs next to the couple’s billiard table. It shows a pimp, surrounded by women in dresses of all colors, standing in a skillet, which is also cooking the earth. Behind them is the Chicago skyline.

“We was living in the skillet,” said Afonja. “47th Street, violence, poverty — that’s the skillet.”

Before I left, Afonja gave me a free divination.

Mahon retrieved a Yoruba text from downstairs, while Afonja rattled a wooden tapper — used to call forth deities and ancestors — against the side of the billiard table. Mahon asked me my birthday and my mother’s maiden name while Afonja called out from across the room: “Speak ancestors! Speak! Speak!”

He then informed me that my Yoruba name was Simba and Mahon, consulting a Yoruba book, explained what I ought to do and not do, which included dressing in white, avoiding violence and jail, embracing the Yoruba god Ifa, and avoiding white foods.

Mahon explained to me that she had gone to Baptist and Catholic Churches growing up, but found the Yoruba religion more congenial to her sense of the world.

“The gods are like us,” she said. “They fight, they cheat. What I love is that Yoruba is about you becoming the best version of yourself. It’s not an authority telling you what to do.” 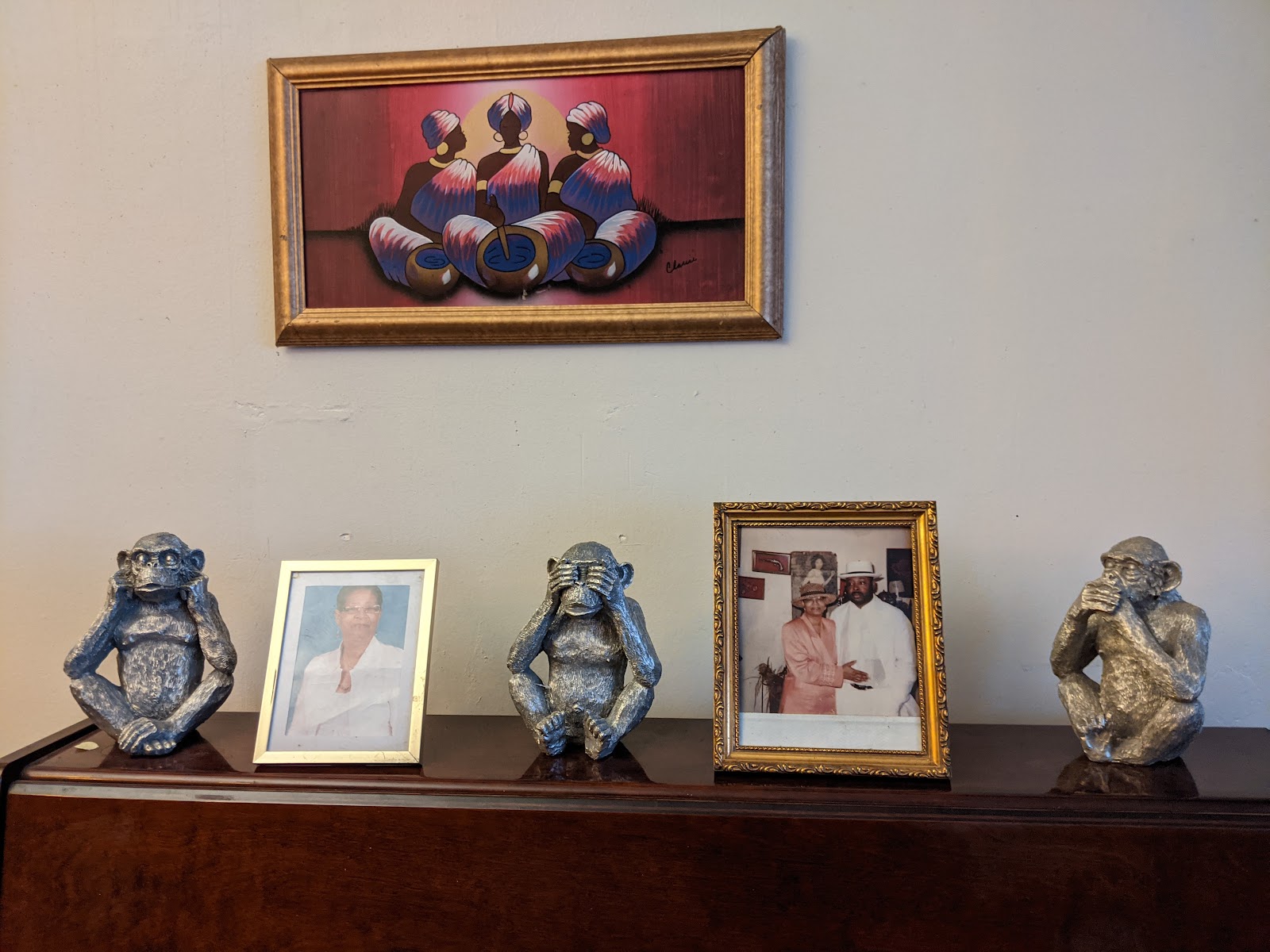 Afonja paced back and forth, showing me video endorsements from friends, and showering me with gifts. I left the house with a calendar of the seven wonders of the world, Tiger Blood incense cones, and a memoir of a Jewish family. The house is covered in books from around the world. At its center is an altar, on which stands a fertility goddess and a wooden crocodile balancing a Bit-O-Honey candy on its back.

Afonja explained that he became a Babalawo after his cousin performed a divination for him. In the divination, his ancestors told him to change his life.

“The ancestors say you gotta be a Babalawo,” he began. “But I didn’t want to. I didn’t know what a Babalawo was.”

“We thought all that was Voodoo,” said Mahon.

“I didn’t know nothing about it, but my cousin said I had to do it, and then I heard the ancestors, and I knew,” said Afonja.

“And what did they tell you about the guns?”

“The ancestors said I had to give all my guns away. Had to give them to Ogun. Ogun is a God, a fictional God in the back,” he said. “There was threats on my life, but I had to get rid of all of them.”

Afonja took me to the backyard to see Ogun.

A warrior god, he was made from a small pile of scrap metal, rusting scissors, wrenches, cans, a glass skull, and a halved coconut. The pile commemorates Afonja’s decision to forego violence. As I left, a maintenance man went back to cleaning the iron god. 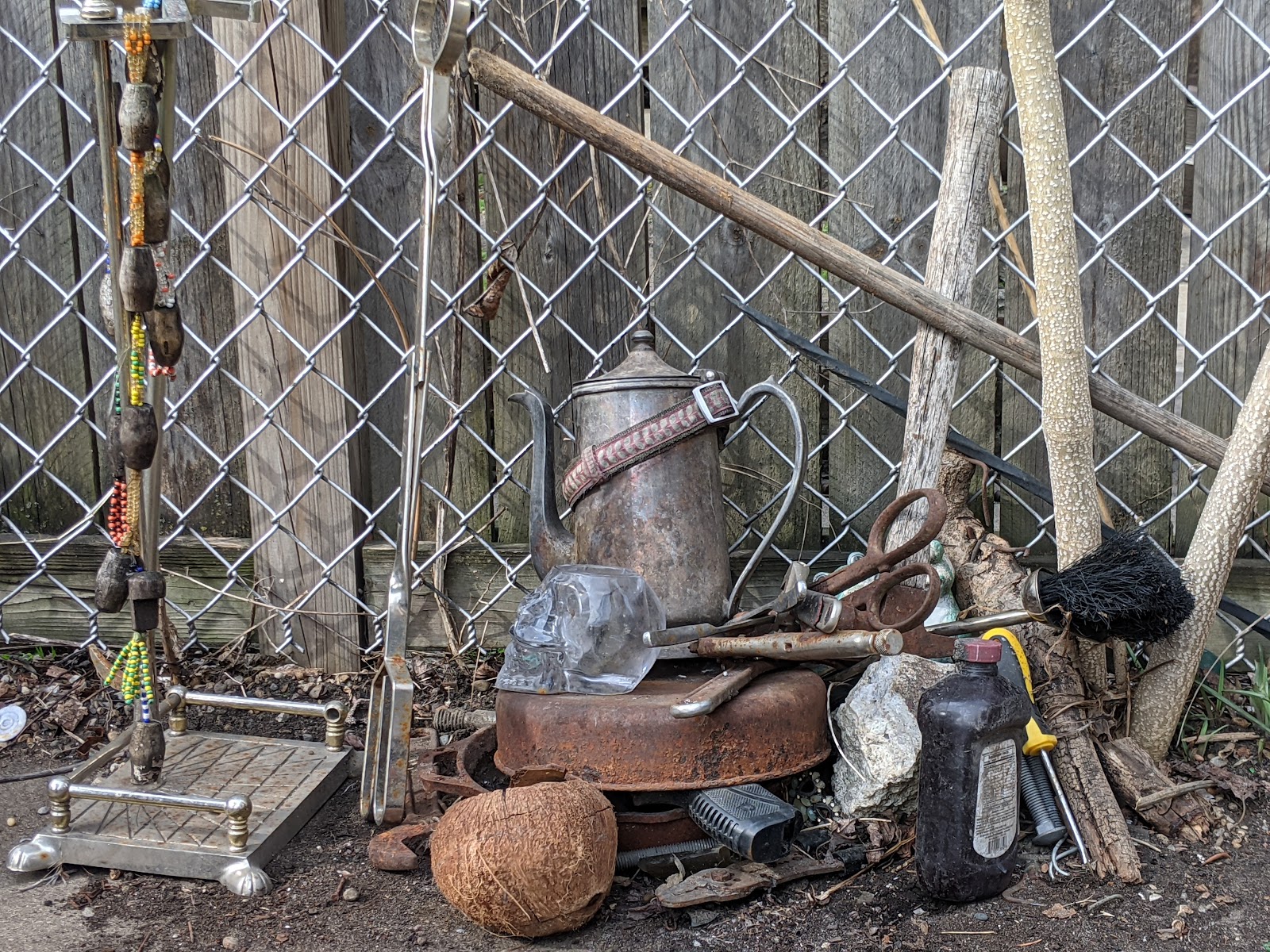