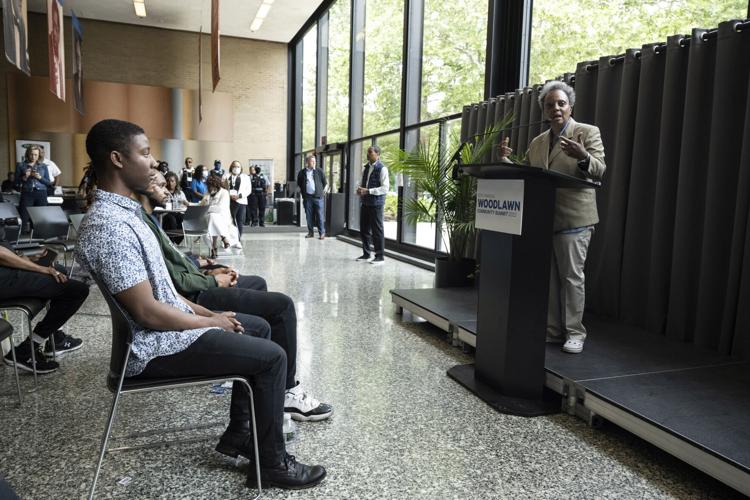 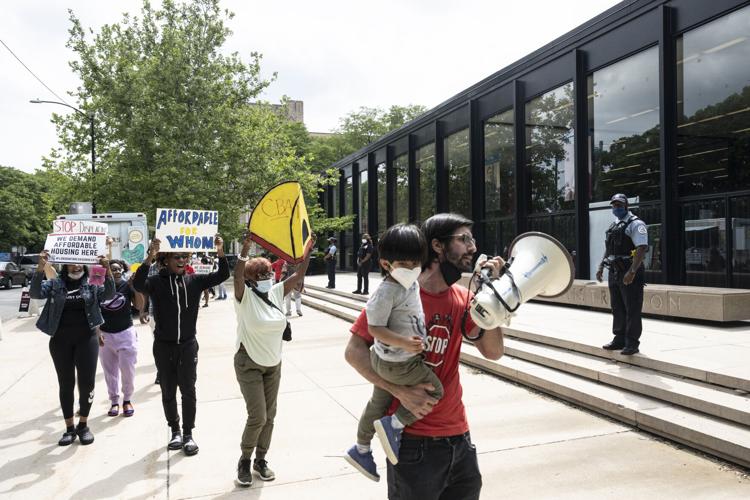 Members of Southside Together Organizing for Power (STOP) march outside the Crown Family School building, 969 E. 60th St. and attempt to disrupt Mayor Lori Lightfoot as she speaks inside the building during the 13th Annual Woodlawn Community Summit, Saturday, June 11.

“The resources are out there. Go get ‘em!”

That was Sandra Bivens’ rallying cry at the 13th annual Woodlawn Community Summit, a free networking event for business owners, city officials and residents to discuss housing, public safety and economic development in the community.

Bivens, a Woodlawn resident and the executive director of the Washington Park-Grand Boulevard based 51st Street Business Association, kicked off the event with a mid-morning panel discussion centered on two topics: The City’s development plans for the neighborhood, and available grants for businesses and homeowners to renovate their properties and develop new neighborhood amenities.

These developments and grants come as the City prepares for the opening of the long-controversial Obama Presidential Center (OPC), now under construction at Woodlawn’s east end.

“We want Woodlawn to have all the services and amenities you would expect in a healthy neighborhood,”  said Department of Planning and Development Commissioner Maurice Cox, a panelist. “Culture, recreation, health care, public transit, retailers, restaurants… We’re excited to be able to ride the [OPC’s] coattails.”

Before an audience of more than 100 attendees, Cox detailed the City’s plans for “reimagining Woodlawn.” He described a  “charm bracelet” approach by city planners to draw tourists from the OPC westward, deeper into the Woodlawn community.

It’s at Cottage Grove Avenue where the City is hanging its first charms, according to Cox. A zone about 15 minutes’ walk from the OPC’s Jackson Park campus is already under development, anchored by the CTA’s Cottage Grove Green Line station at 63rd Street. The area surrounding the station is a Tax Increment Financing (TIF) district where more than $150 million is being invested in new construction.

That includes an overhaul of the CTA station; construction of the new 45,000-square-foot Friend Health headquarters and clinic; and a retail and residential complex called Woodlawn Park Station, to be built by private developer DL3. The first phase of Friend Health construction is nearly complete and the facility will open next month, Cox said. A second building is planned, along with a parking structure.

The Chicago Public Library’s Bessie Coleman branch will move to the locale, and the Washington Bank building will be renovated for offices, retail stores and a food court.

Closer to the OPC, the City owns a two-block stretch of 63rd Street adjoining the Hyde Park Day School, 6254 S. Ellis Ave, and the University of Chicago’s charter school at 6300 S. University Ave. Cox said the City plans to issue Requests for Proposals (RFPs) for six new mixed-use buildings to be developed there, over the next seven to 10 years.

Vacant city-owned lots from 63rd to 65th Street will also be named in RFPs for the construction of new homes. “We want to fill in the missing teeth along those streets,” Cox said. The City would dedicate clusters of residential parcels to specified types of housing: single-family homes, townhomes, or two- or three-flats.

Cox added that 30 percent of the residential units throughout these new developments would be affordable, meeting the requirements of the 2020 Woodlawn Housing Preservation Ordinance, which was created to help combat OPC-driven displacement of residents. The ordinance, passed as a compromise to a long-fought for community benefits agreement, mandates that, “on 25% of city-owned vacant land, 30% of units in each project must be affordable at 30-50% of Area Median Income.”

He said the City will not designate individual parcels for affordable housing until larger plans for the surrounding area have solidified: “We’re not going to do this piecemeal.”

Cox was asked about a sprawling development envisioned by J. Byron Brazier and his father, Pastor Byron Brazier of the Apostolic Church of God, 6320 S. Dorchester Ave. The megachurch has acquired much adjacent property, and in December of 2021, the pair presented a model of Woodlawn Central, an eight-acre “cultural complex” they want to develop at a cost of $600 million. Among its amenities would be a hotel, retail and office space, performance venues and up to 870 units of mixed-income housing.

Responding to the question, Cox said, “The market will do what the market will do. We can’t control it…But I would not lose a lot of sleep over this. I’ve seen dozens of projects like this and, literally, in my two years as commissioner I have not seen a single one advance. It’s one thing to hire an architect to do a vision. It’s another thing to get it financed by a bank and get it constructed.”

Though the OPC is controversial, the dollars under discussion, available through a variety of grants panelists detailed, were real. Some of them are linked to Woodlawn’s two TIF districts. Others, including federal pandemic-recovery grants, are available to Chicagoans citywide. There are grants for new business and cultural initiatives, and for renovating existing homes and businesses. Low- and middle-income Woodlawn residents threatened with displacement may qualify for help with rent, mortgage payments or property taxes.

Bivens acknowledged the application process for grants can be intimidating, especially for first-time applicants. “Don’t be scared of these grants,” Bivens said. “You do have to have a game plan. And a lot of people are going after these funds, so you may not get that first grant, but try it! You may surprise yourself.”

Said Bivens to the group, “C’mon, you’ve been living in Chicago, you know how it works. You gotta know somebody.” She nodded toward Cox as he pocketed the phone number of a young man looking for help with a nonprofit venture. “Now you know somebody.”

After the plenary session, an hour was devoted to breakout meetings on three topics: home ownership, sustainable development and public safety. The networking session for current or prospective homeowners was overseen by Associated Bank’s Paula Grant, vice president for residential lending. The Chicago Police Department’s 3rd District commander, Roderick Watson, led the public safety session focused on collaboration between police and community residents. The sustainability session was led by Naomi Davis, founder of Blacks in Green.

Midway through the summit, Mayor Lori Lightfoot arrived to give a brief address. Upon her arrival, members of the Woodlawn-based group Southside Together Organizing for Power (STOP) marched the sidewalk outside the venue, shouting and carrying signs that read “we demand affordable housing here.” Since shortly after her election, the group has feuded with the mayor over the Obama Center and the changes it will bring to their neighborhoods. Displacement protection for nearby tenants and homeowners has been a chief point of contention.

While the City has entered into a CBA, I remain baffled that the Obama foundation has not. I'm skeptical because the City promised Woodlawn 52 lots, as part of this "CBA" compromise, but now Mr. Cox is saying "we aren't doing this piecemeal", leaving me wondering what will happen to this promise. There will be jobs available at this center, who will get them? An athletic center, 'community kitchens', the museum?

Can we get a CBA for any of the opportunities available at the Obama Center?