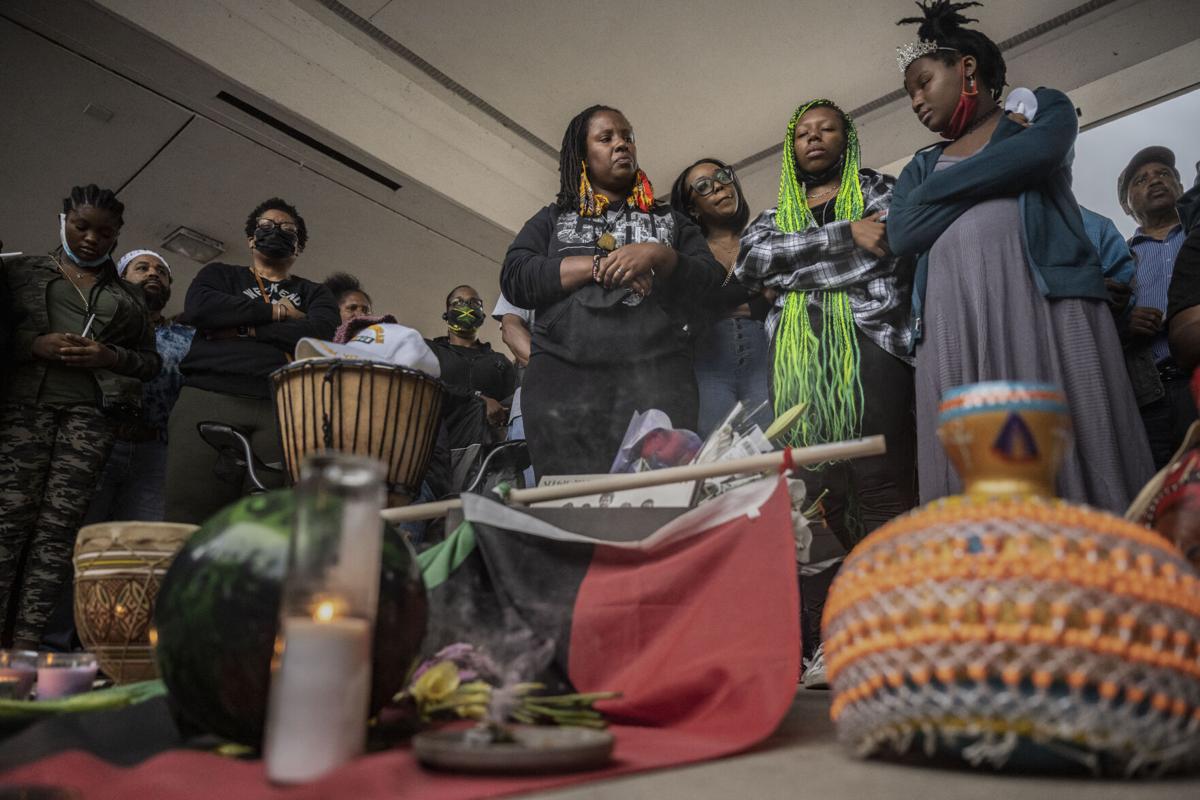 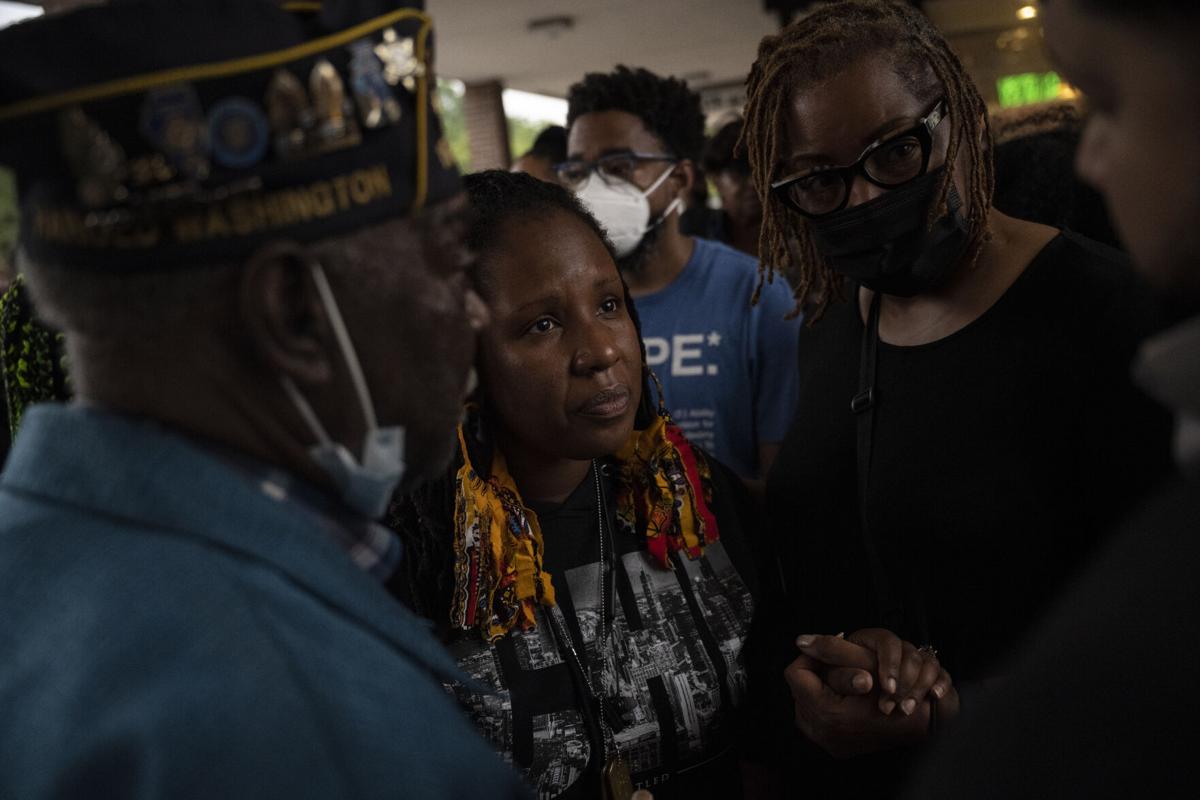 Following her father’s vigil in Kimbark Plaza, Keinika Carlton listens to a representative of the American Legion who offers his condolences for her father’s death and any kind of assistance she needs, while her cousins on her father’s side, John Newsome (on her right) and Wendy Bond (on her left) listen.

In the humid air of Friday evening, July 16, well over a hundred people gathered for a vigil in the Kimbark Plaza breezeway to remember and honor Keith Cooper, who had died the previous Wednesday after being attacked in the plaza during a carjacking attempt.

The gathering crowd, including many veterans, watched as members of Cooper’s family erected a memorial on the sidewalk of the breezeway near where he had died. As it was being built, a drummer rolled out a soft walking beat. A poster-sized photograph of Cooper had been taped to a nearby pillar.

“You know my Dad was the type of a person to come in a room and find a corner of the room and sit. He cool, chill in the corner. He never was one to be amongst a crowd,” said Cooper’s daughter, Keinika Carlton, as the vigil started. “Well, Daddy,” she added with a smile, “you in a crowd now.”

Carlton spoke by the memorial, which was composed of objects meaningful to Cooper. It included a Pan-African flag, a talking drum, a United States flag, a “Sergio Mendes and the New Brasil ‘77” LP vinyl album, a church stole fashioned out of African-patterned cloth, and a white hat emblazoned with “Marine Veteran” and decorated with service ribbons, including one indicating duty in Vietnam.

“This is amazing, just amazing to see all of you all out here,” continued Carlton, looking around the crowd.

“And it makes sense,” she said.

Earlier that day, during a bond hearing for one of the young men who had attacked her father, Carlton had heard what people had done for her father afterward.

“To hear how so many people helped him that day,” said Carlton. “Everybody jumped in. They helped. They comforted. They gave information. They pointed in the direction of where the attackers went. I heard that people even followed them.”

Other family members spoke during the vigil, including Cooper’s son-in-law Scott Carlton.

“He was there for me,” he said. “He really did treat me like a son. Whenever I needed to use his car, he just said, ‘Make sure you fill it up with gas.’

Pilar Audain, a community healer who was invited by the family to facilitate the vigil, stepped forward and said, “As we honor Baba Cooper, let us turn our energies inward to one another.”

“Mama Gwendolyn Brooks once said that we are storm riders,” intoned Audain. “While others fall beneath the whip and clap of the whirlwind, we conduct our blooming, in the whirlwind.”

As Audain continued, the drumbeat began again and she started walking around the memorial.

“We struggle, every single day. We wake up. We feed our children.”

“We turn on the TV and watch the news. We put on our clothes. We turn on our coffee, drink our cups of coffee,” said Audain.

“We go to work. Serve a master who puts money in our pockets so that we can pay our bills.”

“Let us think of all of those who have lost their lives to senseless hate and racism.”

Carlton announced that some of her father’s ashes would be spread in Chicago and some in New Orleans.

“He said, ‘Baby, I want half of me in the mouth of the Mississippi headed to Brazil.’ ”