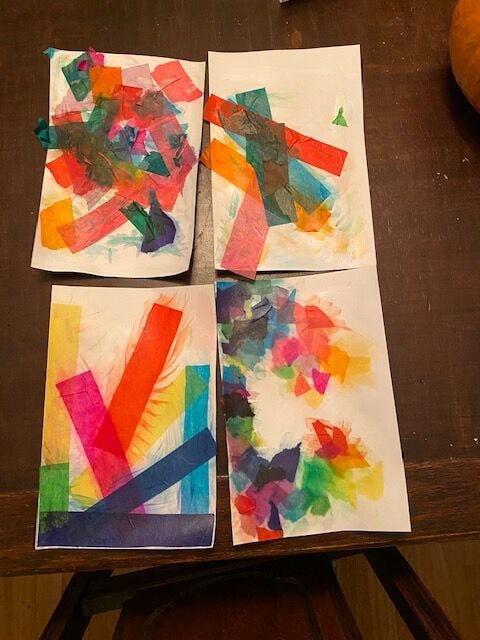 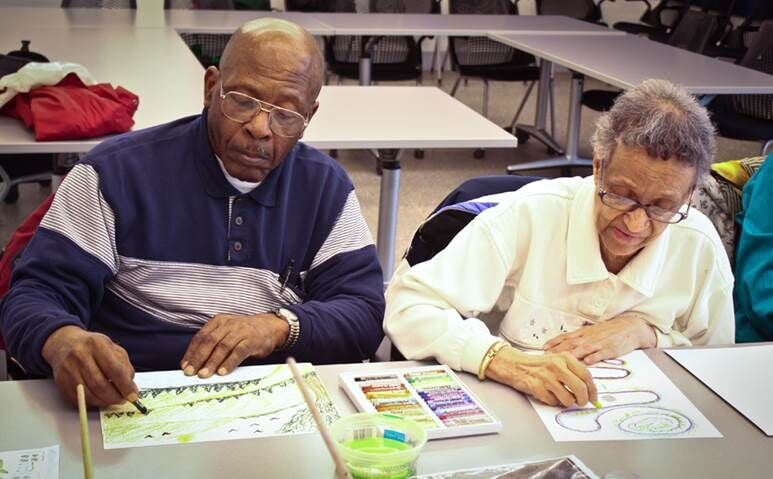 Two people participate in the "Art Is..." program, a therapeutic initiative for patients with dementia and their caregivers started by The Memory Center at The University of Chicago Medicine.

Two people participate in the "Art Is..." program, a therapeutic initiative for patients with dementia and their caregivers started by The Memory Center at The University of Chicago Medicine.

1/27/21: The "Art Is..." program is now available to the general public. Visit thememorycenter.uchicago.edu/artisin for more information and to sign up.

A neighborhood art program that fosters creative expression among older adults living with dementia may expand citywide after successfully transitioning to a mail-only system during the COVID-19 pandemic.

Until the pandemic, "Art Is…," a University of Chicago Memory Center program led by Fabiana Goodman of Goldmind Arts and Aging, was made up of workshops that Goodman facilitated in or near Hyde Park. During the workshops, older adults living with dementia and their caretakers would create and discuss art to foster creative expression and socialize, which the National Institute on Aging says increases well being.

"Art Is..." was halted when the COVID-19 pandemic began because the virus’s spread eliminated the possibility of safe in-person interactions. In early September, however, Goodman resumed it as a mail-only pilot program that included 10 participants, who were found through the University of Chicago Medical Center, and their caregivers.

The pilot followed a simple procedure. “Every week, a kit comes in the mail,” Goodman said. “And inside of that kit is everything you need to sit down right there to do art, and there are photocopies of famous art included and conversation points about the art."

One week, the kit contained art supplies, a Renoir painting featuring a dancing couple, and a sculpture of Shiva, the Hindu lord of the dance. It also included a prompt that asked participants questions like “What music do you like to dance to?”, “When was the last time you went dancing?” and “What were you wearing the last time you danced?”, Goodman said.

Goodman said she chose to operate "Art Is…" through the mail to allow caregivers flexibility, as the offline nature of the program allows them to work through the program whenever they want, without requiring them to learn new technologies.

During the pilot, volunteers from Art Should, a student organization at the University of Chicago, called participating families once a week to bond with them and ask for feedback.

“This is not only enhancing and relieving the isolation issues but also stimulating the brain when we see that arts, music and movement are healthy for brain activity,” she said.

The participants were pleased with the program. “One amazing thing that has happened from this experience is that not only do they feel so special with a tangible package arriving at their door,” McEwan said, “but (caregivers) also have been saying that the participant has, I quote, 'lit up,' and that it has changed the dynamic of their relationship.”

Kenwood residents Marcus and Charlene Whiteside, who have been "Art Is…" participants for nearly a decade, discovered the program soon after Charlene Whiteside, 75, was diagnosed with dementia. They quickly adjusted to the at-home pilot. “The instructions that they send in the mail to Charlene, they’re very straightforward,” Marcus said. “In class, we did these step-by-step in the same way.”

Whiteside added that his wife misses leaving the house and socializing with others, but he takes her on long drives through Chicago to make up for the isolation.

The Whitesides' positive experience extended to other participants in the pilot, which concluded in late September, clearing a path for a broader program that will likely begin in December. The second iteration will include around 50 participants found through the Memory Center and may lead to "Art Is…" scaling up citywide with help from the SHARE Network.

The SHARE Network collaborates with 20 organizations in the Chicago area, including the Illinois Chapter of the Alzheimer’s Association and several long-term care facilities.

With the SHARE Network’s help, "Art Is…" will be able to reach out to these organizations to gain participants citywide, Goodman said, allowing the program to expand from its current roster of Memory Center patients. (Both the SHARE Network and the Memory Center recently worked with Chicago Hyde Park Village to help the neighborhood become a “dementia-friendly community,” a designation helped along by the existence of programs like "Art Is...")

For Goodman, the program excels because creative expression is well-suited to older adults living with dementia. “In all art, realistically, you cannot be wrong,” she said. “You make up your own rules as you go, and that is really good for somebody with dementia because it means they can’t do it wrong.”

Besides encouraging creativity, the program is also designed to relieve suffering behind closed doors. “Art kind of makes people feel connected to others,” Goodman said. “It brings out a lot of humanity, and I think when we’re so isolated, it helps people connect to the outside world and the people they’re taking care of.”

“I wasn’t even sure if this was gonna work,” Goodman said. “And not only now is it working, but we’re talking about extending it to thousands of people, and, if we’re lucky, even nationally.”

For more information, visit The Memory Center and GoldMind Arts and Aging online.