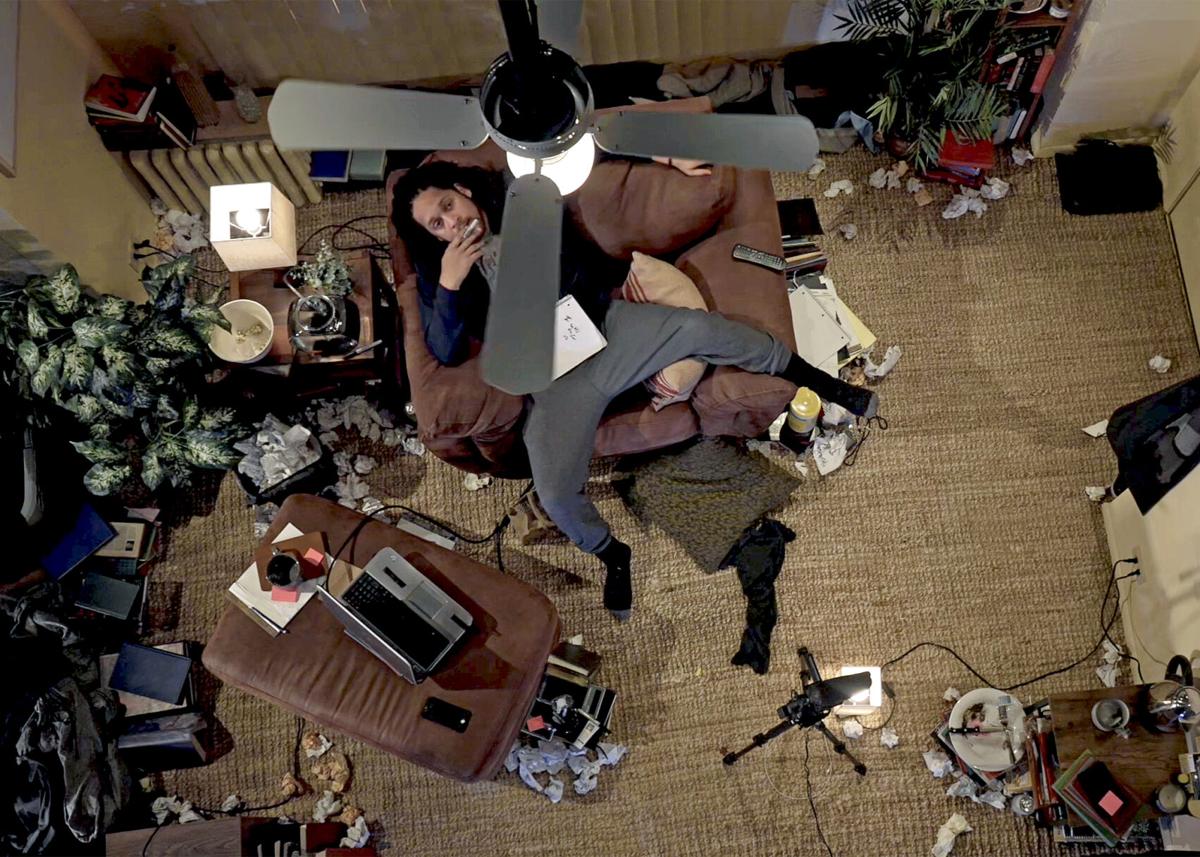 Julian Parker as the title character in Chicago Shakespeare Theater's "I, Cinna (the poet)." 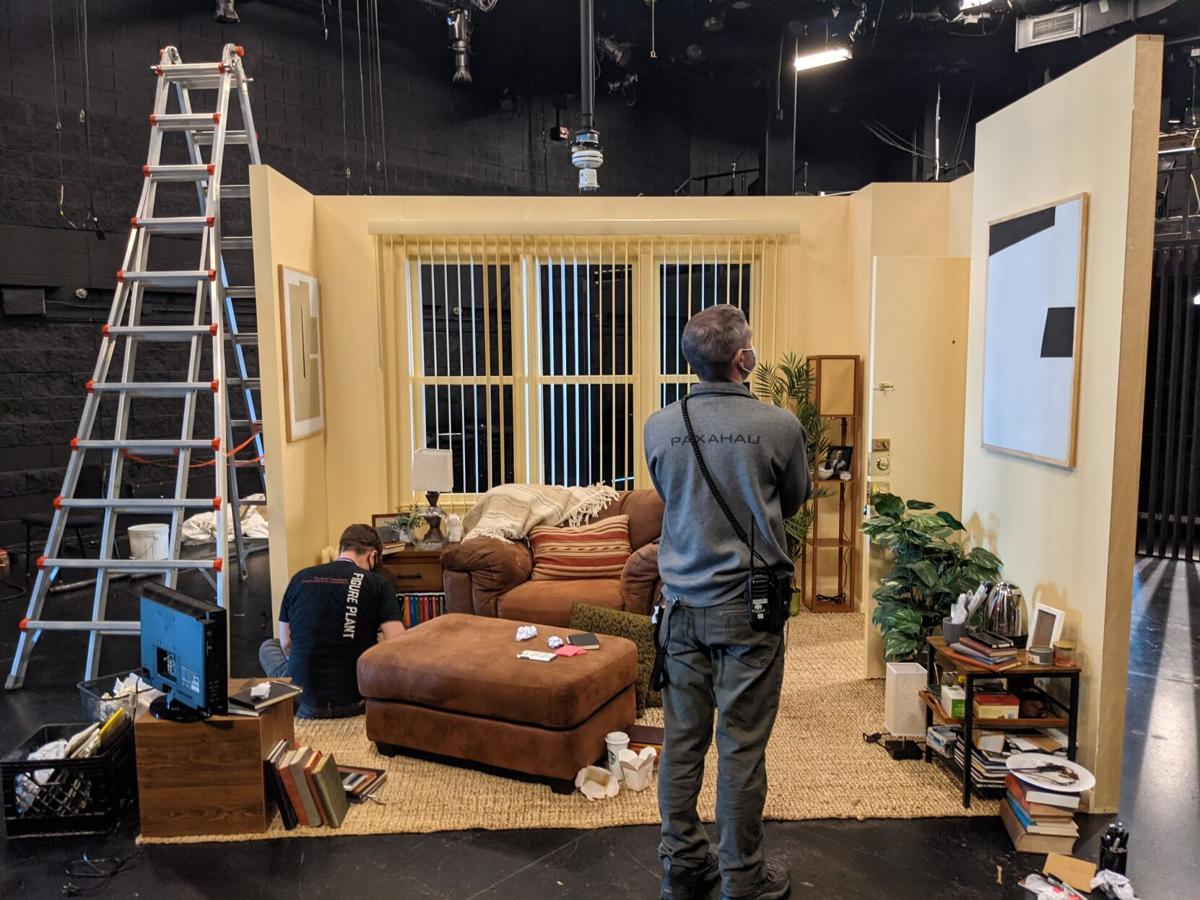 For the production of 'I, Cinna," the Chicago Shakespeare Theater positioned remote-operated cameras throughout the set to capture the actor’s live performance.

Julian Parker as the title character in Chicago Shakespeare Theater's "I, Cinna (the poet)."

For the production of 'I, Cinna," the Chicago Shakespeare Theater positioned remote-operated cameras throughout the set to capture the actor’s live performance.

The title character in Tim Crouch's “I, Cinna (the poet)” has a severe case of writer's block. Even as he invites us to compose a poem along with him, the man torn apart by the mob in Shakespeare's “Julius Caesar” after being mistaken for a namesake conspirator questions the purpose of the poet in society, wondering whether or not he should stay on the sidelines or get politically involved. He mulls over the power of words at length and sees himself as a man “in brackets” — the portion of a sentence that can be removed without changing its meaning.

In Chicago Shakespeare Theater's filmed North American premiere of the hour-long play, originally commissioned by the Royal Shakespeare Company for the 2012 World Shakespeare Festival and part of Crouch's series for young audiences featuring minor Shakespearean characters, brilliant actor Julian Parker, director Tyrone Phillips and the designers bring Cinna's plight up to the moment, making it more relevant than ever.

We feel it from the moment Cinna rushes into his small, messy apartment — a soundstage built in the theater — bundled up in costume designer Christine Pascual's slouchy clothes and wearing a face mask. Scenic designer Yu Shibagaki decorates the set with an old armchair, a small table with an electric tea pot in one corner, and books scattered about that show the evidence of his writing efforts, among them crumpled-up sheets of paper all over the floor and notes on scraps tacked to the walls.

Like many of us these days, Cinna keeps in touch with the outside world through electronics, including a cell phone, laptop and tv. He's also making a video record of his activities, with literal brackets when he turns the camera on. And, fearful of the gathering mob and having been stopped by two policemen, he tells us that he doesn't plan to go out again, even though his trip to get bread failed. Instead, he scored a chicken and at one point inspects its innards for omens (though we don't see the chicken).

What's going on outside increasingly intrudes, however, in grainy clips of mob violence interspersed among Cinna's musings, red lights flashing through the blinds he has closed and ominous sounds rising to crashing noises right outside his door. Credit for the suspense goes to lighting designer Jason Lynch, sound designer Mikhail Fiksel and video designer Mike Tutaj, Multiple cameras, with one overhead, facilitate the sense of time passing and augment Cinna's angst, as he assumes various positions in hopes of getting some rest.

Most of all, though, the poet who only gets a couple of lines in Shakespeare talks nonstop, at the same time as he has trouble putting words to paper. His main problem is finding his subject. He wants to write about love, freedom and peace but says this world won't let him. He claims he's living in a republic, then doubts if that really is true. He believes words can change the world but wonders how his words will change anything, since poverty, corruption and hunger will continue to exist. He asks us to write down what we would die for and what we would kill for.

Cinna also follows — and reports to us on — what's happening with Julius Caesar, from the move to crown him king to his assassination on the Ides of March. It's pretty clear his sympathies are with them and the idea of a republic, but when Mark Antony makes the speech at Caesar's funeral that turns the tide and unleashes the mob, Cinna realizes that Antony is the real poet who has found his subject and whose words change history.

As his end approaches, Cinna agonizes over whether he was innocent or guilty for not getting involved. He finally finds his subject, though, and director Phillips provides an eerie finale that gives him a Christ-like aura. This doesn't quite work for me, but before that, Parker does a terrific job of making the poor poet completely human and sympathetic. We can't help drawing a connection between him and the Black and brown men and women senselessly killed seemingly every day, many of them cases of mistaken identity.