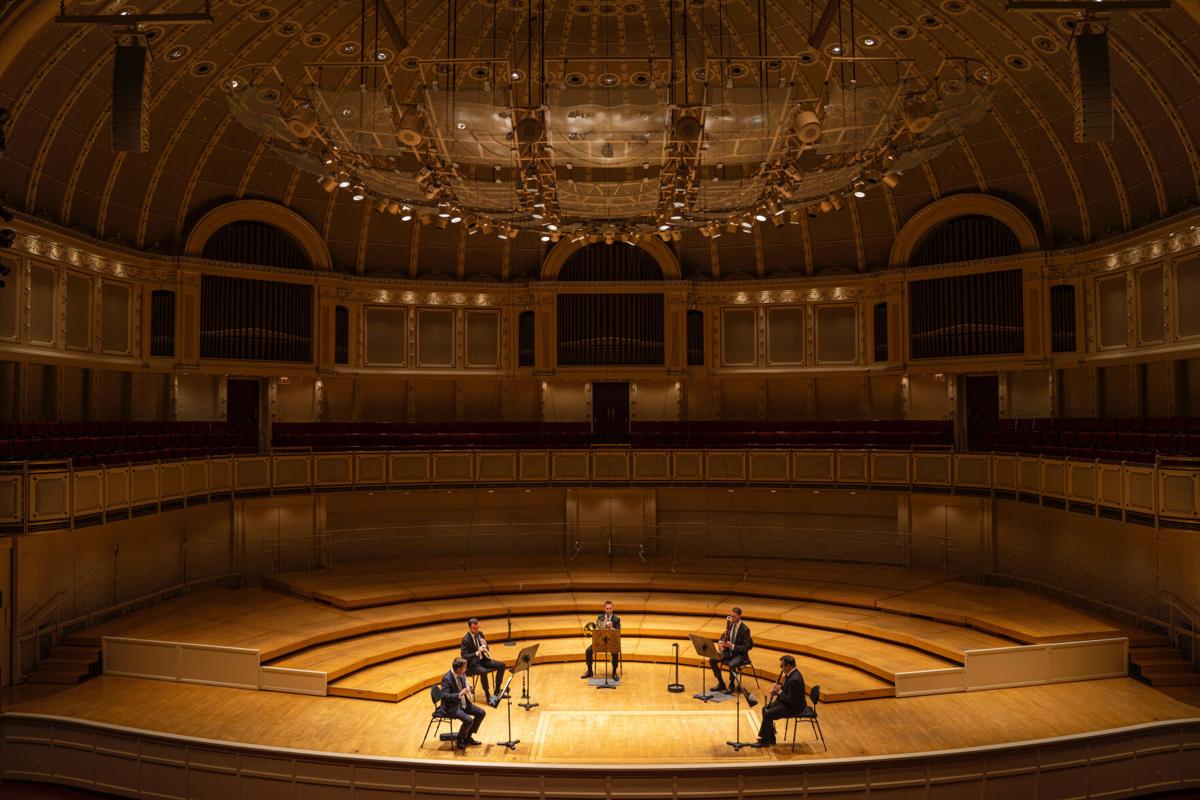 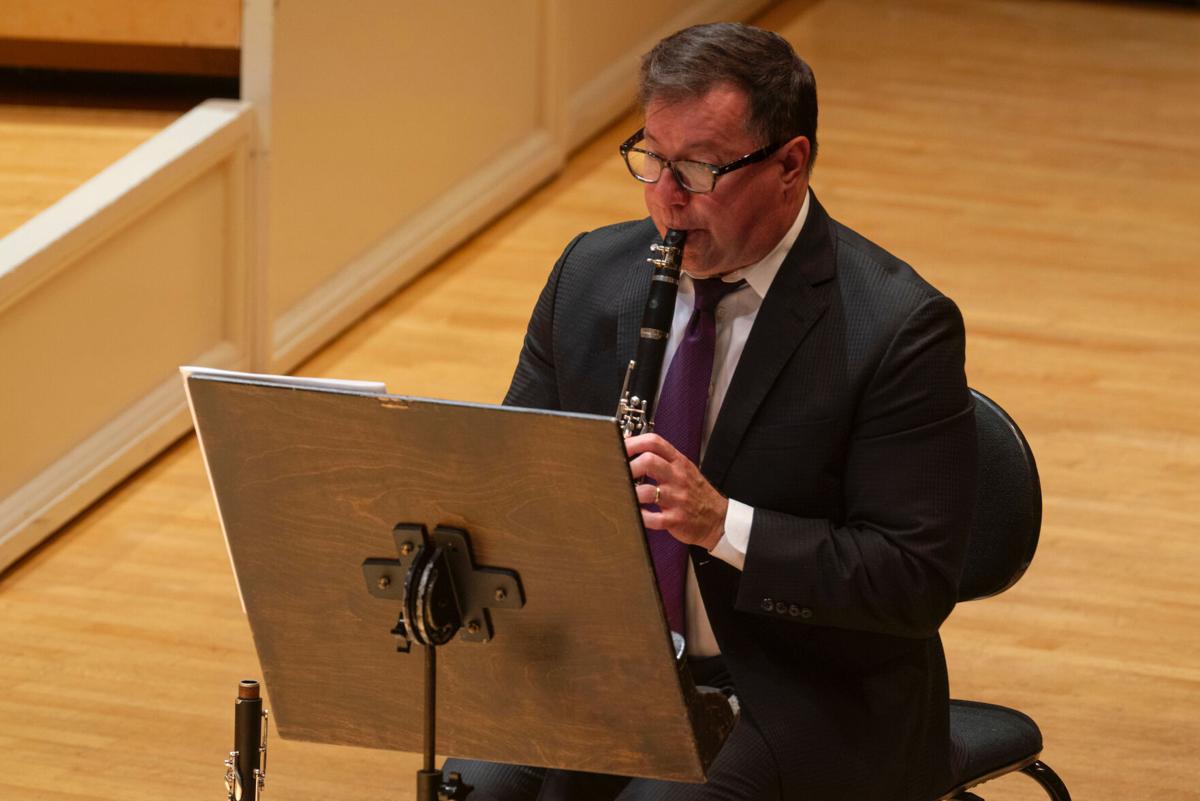 Last week, the Chicago Symphony Orchestra began its series of weekly paid concerts online with a one hour performance. Part of the “CSO Sessions,” the main portion of the concert featured five CSO principals, while a middle section featured two other members of the orchestra.

There were brief spoken introductions to each piece that nicely set the stage for the performances. And the stage was the familiar one at Symphony Center, with the musicians playing at a safe distance from each other.

The concert opened with Gershwin’s Three Preludes, originally composed for piano, here arranged for wind quintet. The ensemble was made up of Stefán Ragnar Höskuldsson on flute, William Welter on oboe, Stephen Williamson on clarinet, Keith Buncke on bassoon, and David Cooper on horn.

The musicians were completely at home with the jazz-inflected music. The first movement, marked Allegro ben ritmato e deciso, had lots of bounce and was infused with gaiety. The Andante con moto e poco rubato was much slower and the players drew out the melancholy elements. The concluding movement, marked the same as the first, was perky and moved at a speedy pace. The final note found the flute triumphantly high, soaring above the rest.

This was followed by an excerpt from Piazzolla’s tango opera, “María de Buenos Aires”. The “Fuga y misterio” has a metronome marking of a quarter note equals 152 (the music is played with 152 beats a minute). In his introduction, clarinetist Stephen Williamson said he originally thought that must be too fast, because “there are sixteenth notes all over the place.” But he listened to a recording of the composer himself playing the music and found that indeed this very rapid pace was exactly what the composer used. He described the music succinctly as “fast and furious.”

The work, in an arrangement for wind quintet by the Venezuelan flutist Marco Granados, opens with only the clarinet playing while the other four quintet members clapped, recreating a drum-like background. One by one, each clapper became a player until all five were instrumentalists again. In this same way, the melody was passed among the musicians, giving each instrument a moment to both shine individually yet meld with the others. The joyful speed of the opening gave way in the center to a slow section with haunting music beautifully drawn out with hints of anguish. The conclusion returned to a rushing tempo and ended with an exhilarating finale.

The quintet took a rest while Jennifer Gunn and William Buchman dueted. What made these so unusual is that the first musician is a flutist and the second a bassoonist. This unlikely pairing was a joy to hear and it was particularly rewarding not only when she had high notes and he had low ones, but also when that case was reversed and the two were performing within the same octave — you could clearly hear the similarities and differences in the sound of the two instruments.

The pair opened their brief set with the Bachianas brasileiras No. 6 by Villa-Lobos. (The title translates as “little Brazilian Bach pieces.”) The “Aria” is marked Largo and the pair, both standing, dove in with gusto. The flute offered lacey sound with playing that seemed easy and relaxed. The bassoon created a creamy legato as the pair treated the music gently, creating something quite pretty. The luminous sound of the flute died slowly at the end as the camera panned out.

The “Fantasia”, marked Allegro, began with rapid flute passages played over long, sly bassoon notes. Both musicians were nimble and engaging with the music ending on three pert bassoon declarations.

Gunn and Buchman then took on the final movement (“Rapide et brilliant”) from Pierre Gabaye’s Sonatine for Flute and Bassoon. The duo emphasized the dancelike quality of the music, at times giving it a happy and martial sound like that of a march for clamoring children. Both players ranged high and low in a relaxed and buoyant performance.

The concert concluded with the original five players taking on a staple of the wind quintet repertoire: Carl Nielsen’s Wind Quintet, Op. 32. Williamson offered a few opening remarks, pointing out that Nielsen’s music often draws on nature and that at one point he believes that the composer wrote the clarinet part to represent a dragonfly and the bassoon part to represent a bullfrog.

In the opening movement, the bassoon introduced the first theme while all five players offered a full sound that seemed richer than only a quintet could create. Each instrument was given the spotlight, with a notably alluring sound from the oboe and a bold one from the horn.

The second movement found the clarinet and bassoon presenting the first theme, later followed by the flute and oboe introducing the second. The contrapuntal elements of this movement were clearly articulated and the players drew a good contrast between this section and the rest of the movement.

The final movement features a praeludium with variations based on “Min Jesus, lad min Hjerte faa en saadan Smag paa dig” (“My Jesus, make my heart to love thee”), a chorale melody by Nielsen himself. For this movement the oboe is replaced with the cor anglais, offering yet another new color to the quintet. The variations were delightful. One is so fast as to be manic, another is brief but offers the horn a chance for muscular sound. The conclusion, full of the sound of joy and devotion, was a singing success.

The technical qualities of this recorded concert were superb. The camerawork was of very high quality (better than I have seen at times on the PBS series “Great Performances”), with an excellent combination of close-ups on an individual player and wider shots including them all. There were numerous different angles: front, side, and back, with judicious use of panning, and the lighting was marvelous. The light wood floor of the stage gleamed like gold and occasional shots highlighted the beautiful lighting in the seating area of the boxes and first balcony. One of the tremendous benefits of streamed concerts like this is that you can listen to them more than once. I viewed these concerts once each on two successive days before writing this review.

The concert, which began streaming on Oct. 1, will remain available until Oct. 30.

Visit cso.org to learn more about these ticketed concerts as well as the many free offerings of the Chicago Symphony Orchestra.