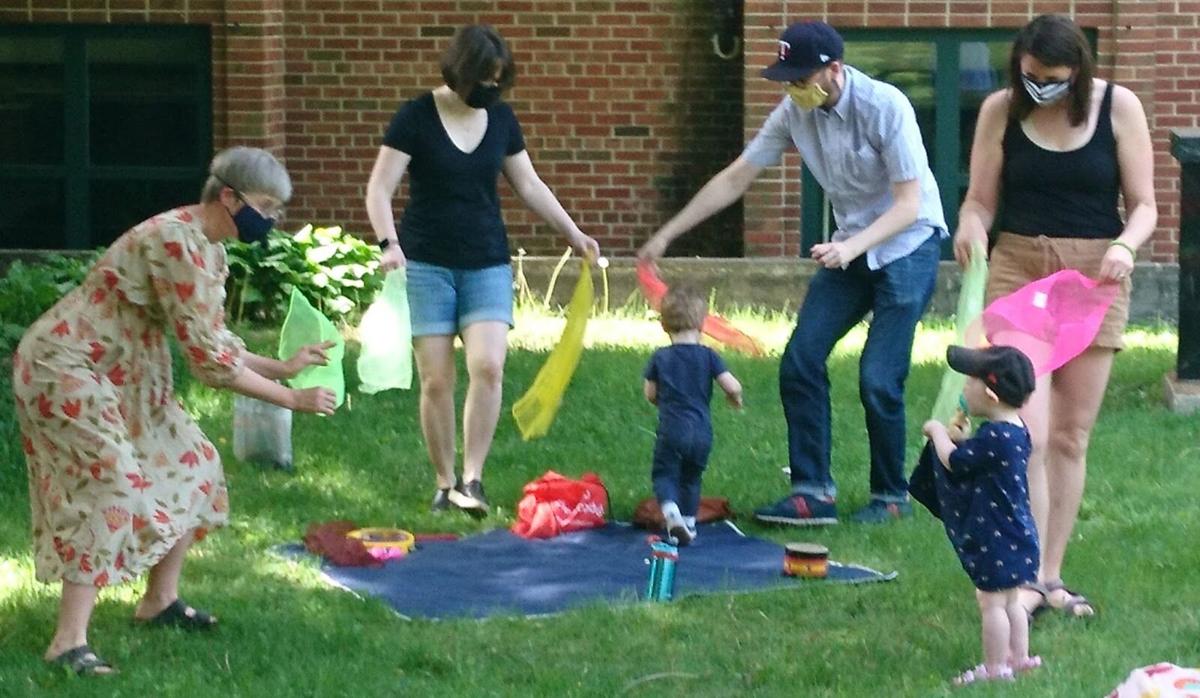 Music Together teacher Julia Allen engages toddler Beatrix Gaudino while everyone sings and does a scarf dance. 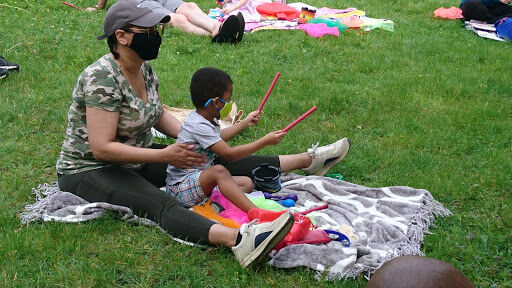 Robin Redmond with Oscar during a Music Together class at St. Paul & the Redeemer.

As with many other human gatherings, it was better to do it on Zoom than not to do it at all. But Marsha Melsheimer was quick to confess that her freewheeling family music sessions are better in person. Now that “class” can be held outdoors, things are looking up for Marsha’s Music.

A former preschool teacher, in November Melsheimer will celebrate 21 years of running Music Together, a playful program that introduces young children to music by getting them to jam in a group with their significant adults. The current term (each term comprises 6 to 10 weekly gatherings) is filled up, with three groups meeting weekly. A new term will start on July 5.

Scholarships assure that no one is excluded. Those who benefit give back through volunteer work.

Twenty-one years is a true benchmark, because Music Together — a popular educational franchise developed in the 1980s — operates on a three-year rolling curriculum. New songs are introduced for three years before the cycle repeats. Like a carousel ride, you can get on or off almost any time: When the term ends, it’s your choice whether or not to re-enroll.

“Isn’t it great to have something on the schedule like this?” a mom asked a nearby dad at a recent Saturday morning class.

Commitment to a full term is key, Melsheimer explained, because the program relies heavily on community and familiarity. The repetition of songs and the week-in, week-out gatherings with the same people are part of a strategy that successfully engages even one-year-olds. Like Warner Bros. cartoons, the songs are “real music, not kid music,” sophisticated and clever enough to keep the adults as well entertained as their offspring.

Here’s a sample of a song that Kevin Kline recorded to help kids understand their parent’s hectic lives. The singer should employ stringendo toward the end, which simply means going faster and faster:

"Oh, we’re very very busy and we have a lot to do,

And we haven’t got a minute to explain it all to you,

Cuz on Sunday Monday Tuesday there are people we must see,

And we have to do so many things and post them on the walls."

The music is likewise un-boring and diverse, drawing — like much advanced jazz and classical music — on a (literally) global assortment of rhythms, melodic scales and modes. The conga beat of Rhythms & Rhymes entices every body, young or old, to shake its tail. Meanwhile, those who wish can improvise lyrics.

Other songs eschew the expected, pedestrian meters of 2, 4 or 8 in favor of a spicier meter like 5. A child raised on this curriculum, Marsha noted, “can hear a song in 5 or 7 and not think that is weird.”

Even before encountering Music Together, as a teacher at the KAM Nursery School two decades ago, Melsheimer noticed that many of her pupils had missed out on the kind of musical experience she had enjoyed as a tot: Children and adults gathering round the piano to sing pop tunes, improvise harmonies, invent lyrics or a dance. Everyone was free of self-consciousness, unconcerned about being “correct.”

Teaching adults how to create that kind of environment for their children is perhaps the biggest challenge for her and her staff. “We have to work with parents who feel that they can’t sing and can’t dance,” she said. In order to make music informally and have a good time, they must be persuaded that “you don’t have to be a genius, and you don’t have to have talent.”

“All children are musical. Really, all humans are. Music is a birthright. Believing that helps parents to give their children the gift of music.”

Nowadays many people, if they sing at all, will only sing along with the radio or a recording. But it wasn’t like that for Melsheimer as a child. “No one thought, ‘Well, we have to have the (recorded) music or we can’t do it.’ Children need to see their parents create music with their first instrument, which is their body!”

If they do, she said, “most children will learn to sing in tune and keep an accurate beat by the time they’re 3. They need to be practicing this through age 9, using a child process rather than an adult (learning) process.”

“All humans are musical. Believing that helps parents to give their children the gift of music.” — Marsha Melsheimer

By jumping on the Music Together bandwagon, Melsheimer joined an international community with “a quest to get the joy of music-making back into family life.” There are some 3,000 Music Together centers around the globe, she said, and attending workshops with other enthusiastic teachers continues to be a treat.

It was clear, after the very first Music Together workshop, that the bug had bitten her. “You were born for this!” said a colleague at the nursery school. Her first family jams were held in her Hyde Park living room. Soon she began renting space in a storefront: Joan’s Music Studio on 57th Street. After Joan’s closed, she moved into the Hyde Park Neighborhood Club in 2015.

Six independent music teachers work part-time for Marsha’s Music, including flautist Irene Claude, who came on board in 2002 and soon relieved Melsheimer of the “business end” of her business. (If she hadn’t? “Maybe I wouldn’t have made it the 21 years.”) There are teachers in their 30s and teachers in their 70s. There have been male teachers, though not at the moment.

A salient teaching requirement is the ability to put the adult “pupils” at ease. Like the more reticent children, some adults must be gradually drawn out. That’s because, in this program, it’s important that everyone participate in their own way. Marsha’s gatherings are full of gentle nudges. “After they’ve seen the same people for so many weeks, even the shy kids will be doing things in class.”

And if you hear, “Stop singing, daddy,” don’t lose heart! According to Marsha, such a request from a 3- or 4-year-old is not to be taken as music criticism. They’re just getting more interested in hearing and testing out their very own voice.

On that recent Saturday morning, the weather was perfect. The shady lawn at St. Paul & the Redeemer, 4945 South Dorchester Avenue, was a little Eden for toddlers, siblings and parents. Everyone was armed with instruments (mostly drums and tambourines), colorful scarves, and other toys pertinent to the tasks at hand. A gentle breeze carried inhibitions away as teacher Julia Allen imitated blackbirds, ladybugs, puppy dogs and kitty-cats. Parents and kids mimicked her with enthusiasm.

When Julia began strumming the guitar rhythms of a Middle Eastern dance, mom Emily Calderbank began to sway and whirl, while son Axel watched from Michael’s arms.  Mommy swirled her scarf in circles around herself, around her baby boy, around baby and Daddy together. For three exultant minutes, everyone seemed to forget everything but the music, and the whole lawn was aswirl.

Marsha is taking applications now for the next session, which will commence right after the 4th of July.  Children aged 0-5 may apply with their adult escorts for Music Together; Rhythm Kids is a separate curriculum available for ages 4-8.