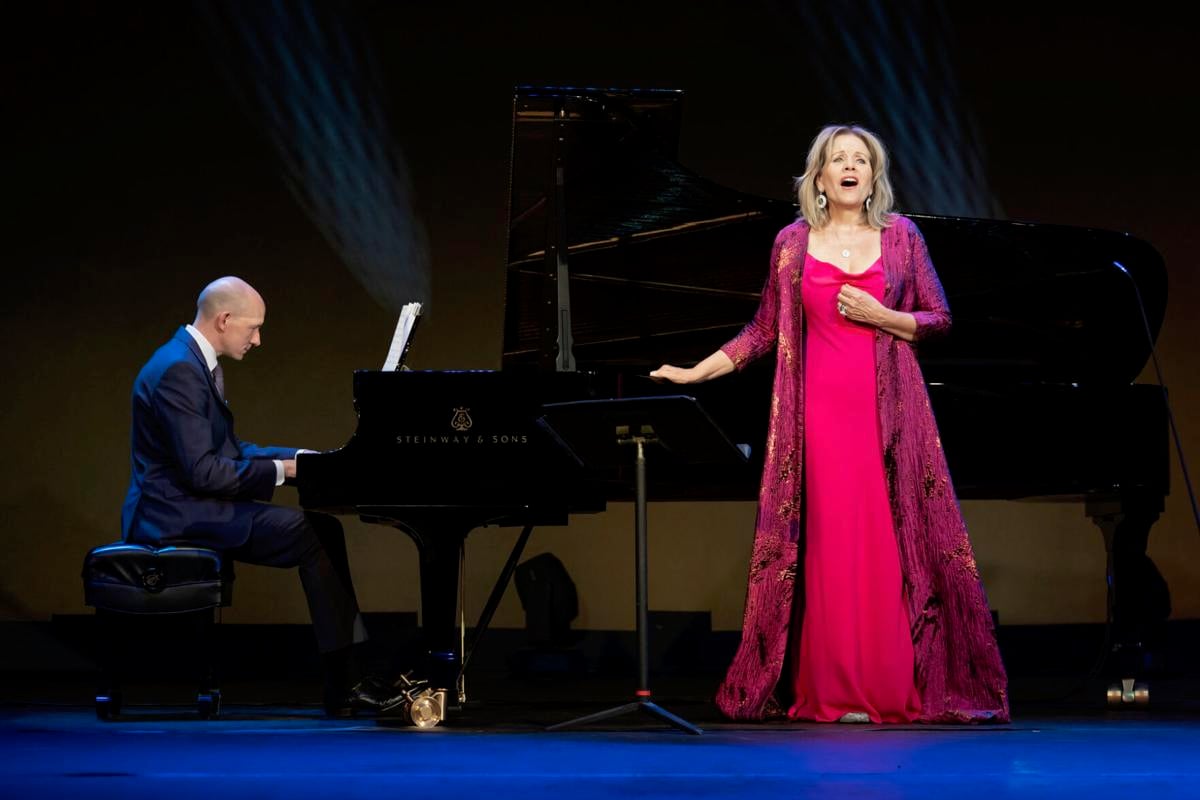 Renée Fleming recorded her contributions to Lyric Opera’s virtual concert at The Barns at Wolf Trap. 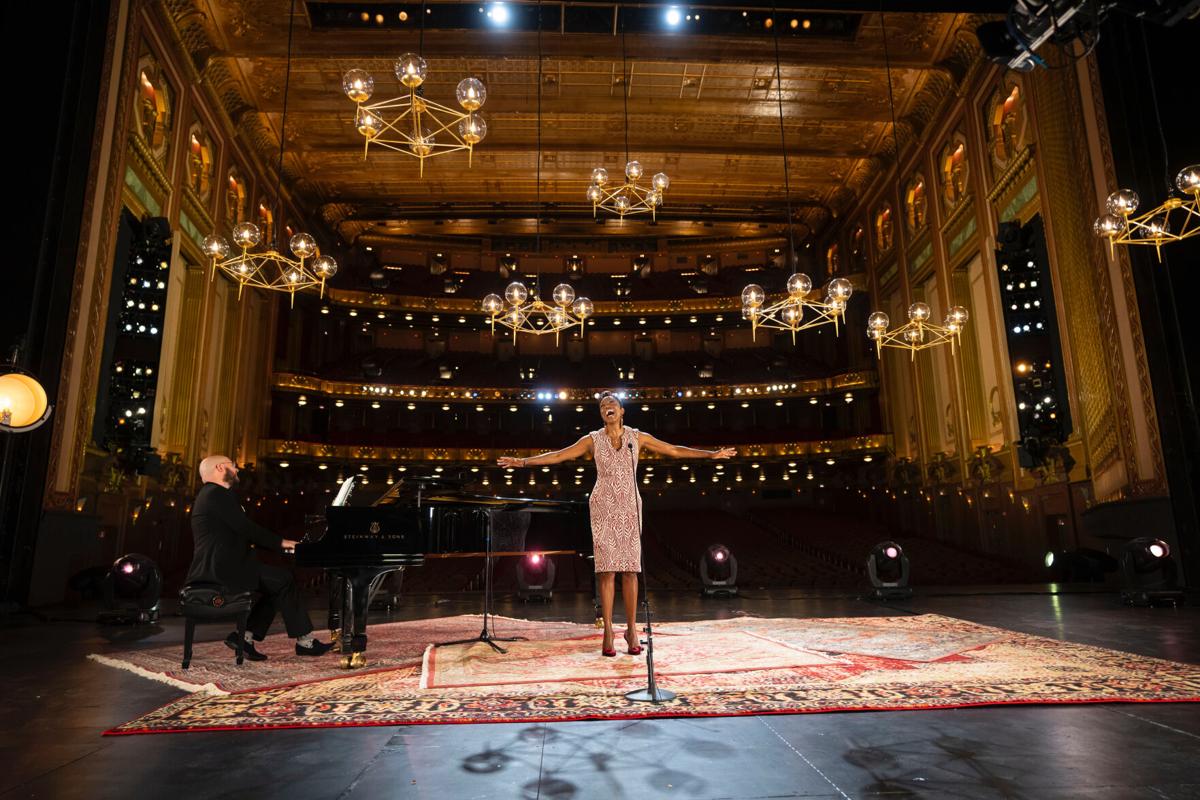 Heather Headley sings to the back of the Lyric Opera stage, showcasing the opulent Lyric Opera House behind her.

Renée Fleming recorded her contributions to Lyric Opera’s virtual concert at The Barns at Wolf Trap.

Heather Headley sings to the back of the Lyric Opera stage, showcasing the opulent Lyric Opera House behind her.

Lyric Opera of Chicago formally kicked off its 2020–21 season Sunday night with a free online gala concert. Lyric had originally planned a cabaret-type event but when coronavirus restrictions made large events impossible, it pivoted and created a virtual concert instead.

Lyric brought six headline singers (and many others) in an online event that featured popular tunes from opera, musical theater, the American Songbook, and more, all in individually produced videos brought together with several introductions by Anthony Freud, the company’s general director since 2011.

Most of the music was not drawn from opera, and so by the end it wasn’t surprising to me that the standout of the concert was a non-opera singer. Vocalist, songwriter, and actress Heather Headley was the star of the night. She originated the role of Nala in “The Lion King” on Broadway at the end of the last century. She’s won a Grammy for Best Contemporary Gospel R&B, and has had recurring roles in television on “Chicago Med” (NBC) and on two Netflix series.

I knew nothing about her before Lyric’s concert and now I only want to know more. She brought three fantastic performances to the concert, starting with “Shadowland” from “The Lion King”. Her prayer-like approach grabbed you from the start and her storytelling ability is second to none. Her singing was haunting and passionate with achingly potent low notes. She had incredible intensity throughout even though most of the song was sung at mezzo-piano or softer.

She offered a rich interpretation of “Look to the Rainbow” from “Finian’s Rainbow” and even though seated in a chair she had such fluidity of motion in her small gestures and movements, that she held you in her hand. When looking up, her beautifully expressive face convinced you that she was actually gazing at something gorgeous in the sky. She artfully combined wistfulness with optimism and hope, leaving you transfixed.

Her final number was from “The Wiz” and she was glorious with “Home”, a song where Dorothy expresses her longing to end her journey and return home. She was marvelously evocative and sensitive, and was deft with every small nod or use of hands. Headley’s acting ability means that she can dance with arms and laugh with eyes. Add to this her magical sense of how to shape a phrase and emphasize an idea, and you had manifest proof of what a great all-around performer she is. In this concert, she was "headley and shouldersly" above the rest.

Not that there weren’t other wonderful performances. Soprano Ailyn Pérez offered an enchanting performance of “Chi il bel sogno di Doretta” from Puccini’s “La rondine”, caressing the music at every turn. It had heartfelt singing combined with warmth and charm.

She also took on “Estrellita” (“Little Star”) by Manuel M. Ponce, a song where a woman sings to the little star of her love. Her voice was sweet and lyrical, her legato perfect, and she flew effortlessly up to the delicate and gentle top notes, which seemed to twinkle like the night sky.

Soprano Renée Fleming, Lyric’s special projects advisor, offered strong, traditional performances of a number of works, beginning with “Zueignung” (“Dedication”), a Richard Strauss lied. Here a woman sings of pain when the one she loves is away, and of joy when she is with him. It’s a short and potent song that she sang with ease and conviction.

She joined forces with soprano Julia Bullock for “Sull'aria … che soave zeffiretto” from Mozart’s “The Marriage of Figaro”. This was the humorous highlight of the evening with bass-baritone Ryan McKinny’s gentle “staged” updating of a plot between two women to catch a philanderer in the act. In the video, the two singers connect via a video computer call to plan their revenge, replete with computer pings and clever use of Google Translate to convey text. The sopranos actually did record their parts with tremendous physical distance: Fleming was in Virginia and Bullock in Munich. Their voices were well suited for blending, and they melted gloriously together. The video ended with a frozen screen for Bullock, and she uttered something naughty, or maybe not — it was bleeped out for effect, and could only have resonated with many listening who have learned in recent months not only the joy of virtual communications, but its frustrations too.

Less successful for Fleming were her numbers outside classical song and opera. “The Last Rose of Summer” is a traditional tune arranged by Friedrich von Flotow and set to a text by the Irish poet Thomas Moore. Some of her emphasis seemed strangely exaggerated and many of her terminal consonants were labored. She seemed to hold on to the grant piano for dear life. “All the Things You Are” from Kern and Hammerstein’s “Very Warm for May” did not seem to be Fleming’s kind of music, as it was unpersuasive and at times even awkward and featured a limp conclusion.

Mezzo-soprano J’nai Bridges, yet another wonderful success story emanating from Lyric’s Ryan Center, had only one appearance in the concert. She selected “Sing” by Joe Raposo, a piece composed for “Sesame Street” where was joined by members of the Chicago Children’s Choir. This is really just a marshmallow song: sticky sweet and filled mostly with air (in this case, a huge passel of the syllable “la”). So it seemed a waste of a great talent. Yet Bridges brought joy to the music and her sparkling smile could tame the harshest of critics.

The only man among the headliners was bass Soloman Howard who opened the concert with a full throated and open hearted rendition of “Lift Every Voice and Sing”, by brothers J. Rosamond Johnson (music) and James Weldon Johnson (text). It was named “the Black national anthem” by the NAACP in 1919 and is a song of hope and inspiration. Howard’s voice was engaging, deep, and triumphant and his performance very moving. He followed this up with “The Impossible Dream” from “Man of La Mancha” where he offered intriguing darkness of voice and a steadfast purposefulness.

There were three great pianists participating in this concert, all displaying accomplished playing and sensitivity to the music and singer(s). Doug Peck served as the music director for the concert and accompanied most of the singers. Robert Ainsley was Fleming’s pianist. And Chris Reynolds, of the Ryan Center, was pianist for the Copland segment.

The concert closed with Ryan Center singers performing “The Promise of Living” from Aaron Copland’s “The Tender Land”. It was an inspired choice to bring Copland’s simplicity and pure Americana to conclude the event. It included lines that I’m sure touched many people who have been separated from loved ones for months and have been comforted by neighbors (some friends, some strangers): “The promise of growing with faith and with knowing is born of our sharing our love with our neighbor.” The young voices created a stirring performance infused with earnest and honest joy.

Most of the performances were recorded on the Lyric stage and some of the singers sang to the back of that stage so that when the camera was directly on them you could see the glittering opera house seats behind them. All the women were bedecked in splendid dresses and gowns, with Fleming’s simple floor length gown of pink under a dusky floor length jacket the most beautiful. Bridges’s shimming emerald green gown was a close second. The camera work was simple and clear but at least once I found it uncomfortable. In one of the videos Pérez wore a deep cut V-neck and one of the repeated camera angles seemed to want to look into her dress from the side so that voyeurism was on your mind.

The hour-long concert was entitled “For the Love of Lyric” and Freud reported that the only income Lyric Opera will have for the autumn will come from philanthropy. So folks were encouraged to make a donation, with the added incentive that the sponsors of this gala concert will match donations dollar for dollar. If you want to contribute or see the archived concert, visit LyricOpera.org.