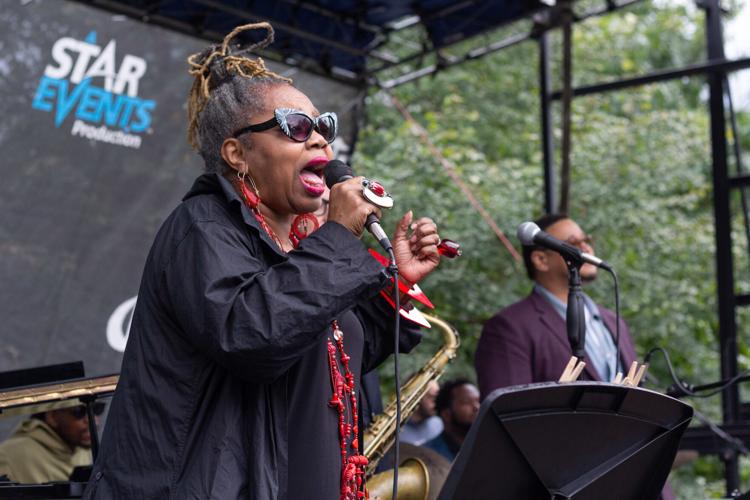 Dee Alexander performs with The Chicago Jazz Soul Collective during the Hyde Park Jazz Festival Sunday afternoon, September 25. The two day festival was held outdoors on the Midway Plaisance and at stages across the neighborhood, and featured dozens of jazz, blues, swing and soul artists from around the country. 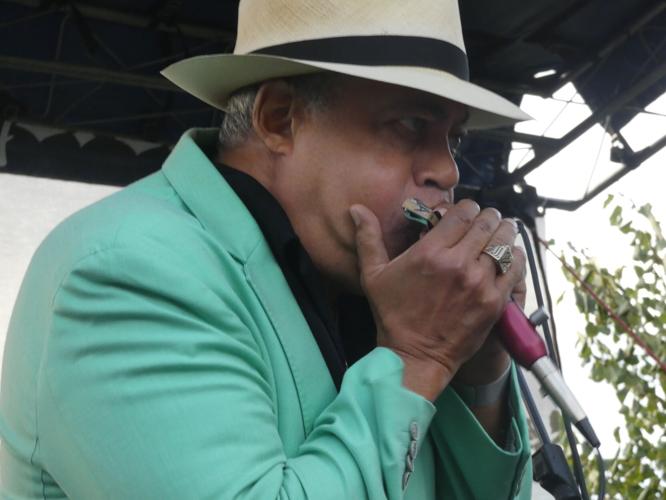 Chicago native and a Blues favorite for more than 40 years, Billy Branch and members of the Sons of the Blues Band thrilled the Hyde Park Jazz Festival audience on Saturday, Sept. 24.

The Hyde Park Jazz Festival, back in full last weekend on the Midway Plaisance and across the neighborhood, has long had the distinction of being one of the few jazz festivals in the city with a plywood dance floor. Alas, there was no dance floor this year, but it didn't stop the attendees from two-stepping on the asphalt.

The festival had several satellite locations in different buildings scattered through the Hyde Park-Woodlawn area — such as the Hyde Park Union Church and Smart Museum — but the meat of the fest occurred on the Midway. With stages at the east and west ends of the park, plus various vendors and other sights in between, the spirit was definitely felt.

On Saturday afternoon, Sept. 24, the Wagner Stage at Midway Plaisance and Woodlawn Ave. played host to the weekend’s more cerebral performers, but there was no perceptible lack of swing. The meditative sounds of the Lenard Simpson Quartet soon gave way to the high intensity of pianist Ryan Cohan and his quartet. Saxophonist Camille Thurman crooned with the usual softness she brings, joined by the Darrell Green Quartet. But it was another saxist, Charles McPherson and his quintet, who appeared to draw the biggest crowd, becoming the unquestioned star of Saturday's lineup. This former Charles Mingus sideman’s 50-plus years of experience were on full display during a 60-minute set, which featured a perfect mix of up-tempo hard bops and subdued ballads, imbued with a dry tone that did not disappoint.

The West Stage at Midway Plaisance and Ellis Ave. is the former home of the famed Jazz Fest Dance Floor. The programmers knew what they were doing by scheduling the acts on this stage. By far, the closest this festival came to an all-out dance marathon was during the set by Billy Branch & the Sons of the Blues. While Branch has occasionally collaborated with local jazz guitarist George Freeman, on Saturday afternoon he stayed right in the blues pocket, slamming the accelerator on a great set that included John Lee Hooker's "Boom Boom," as well as several Little Walter tunes from his recent tribute album, "The Songs Of Little Walter." He even pulled a Buddy Guy by walking out into the audience with a long microphone cord and wailing on his harmonica.

Branch was preceded by the Isaiah Spencer Organ Quintet. Spencer is the drummer, and his band was fairly unassuming. Even though the word organ is in the band name, the frontline of the sax, trumpet and guitar players blocked the view, leading me to wonder where the Hammond organ sounds were emanating from. However, the message got through. Spencer is unashamedly populist in his attitude — a Michael Jackson song, "The Way You Make Me Feel," was followed by three television themes in a row: "Taxi," "Moonlighting" and "The Price Is Right." The West Stage was also graced by Etienne Charles, who calls his sound (and his band) Creole Soul. However, his setlist was more varied than the name would have you believe, often changing styles mid-song. A tribute to the recently deceased Ramsey Lewis started with a reverent version of "Sun Goddess," but quickly morphed into an upbeat samba. A version of Winifred Atwell's ragtime "Coronation Rag" somehow transformed into a wild Afro-Cuban interlude. All the while, these big bad boss beats did not scare the dancers away.

The jazz world has suffered a couple of losses in recent weeks, including the aforementioned Ramsey Lewis, who died on September 12. The morning of the festival, we'd lost legendary saxophonist Pharoah Sanders. Sure enough, his signature tune "The Creator Has A Master Plan" could be heard blaring from loudspeakers stretching from one end of the Midway to the other. Despite these losses, the festival and the live music it brought to the streets of Hyde Park once again proved that the spirit of jazz still has a strong, rhythmic pulse.