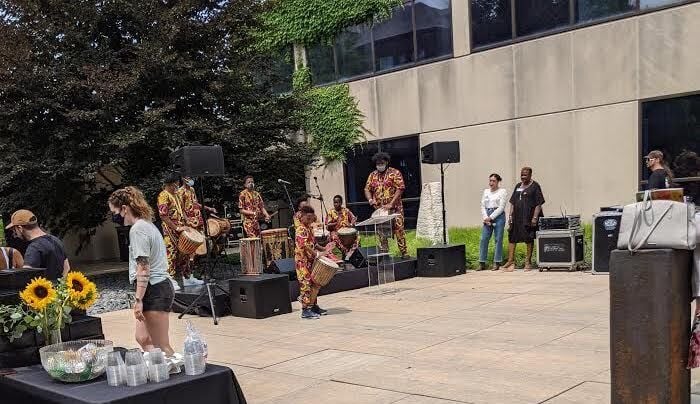 The Azania Youth Drummers performing in the Smart Museum of Art courtyard. 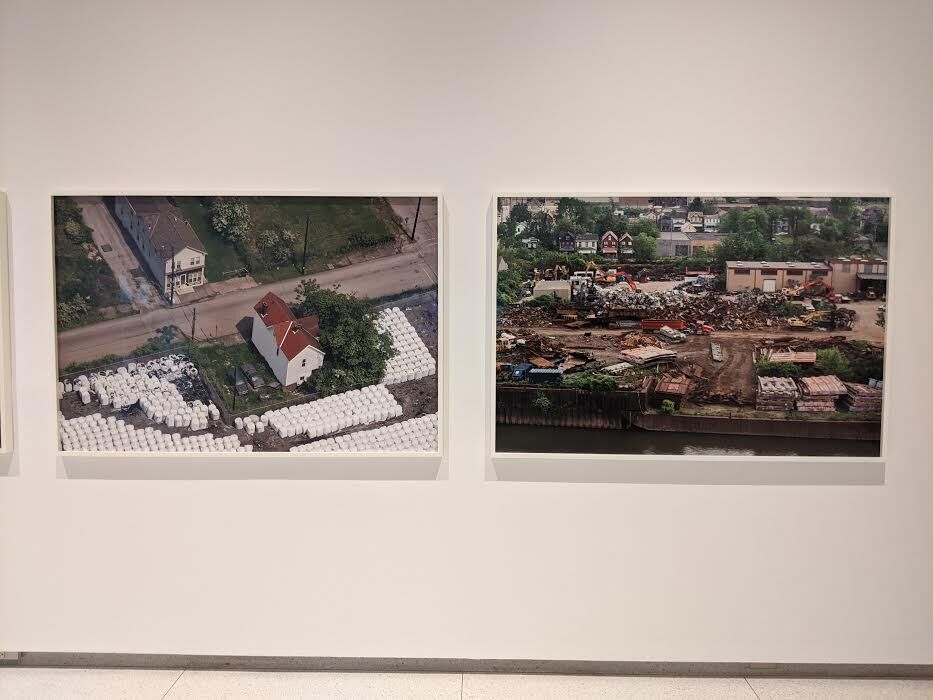 In an opening reception befitting the name of the Smart Museum of Art’s new exhibition — “Toward Common Cause: Art, Social Change, and the MacArthur Fellows Program at 40” — the Forward Momentum Youth Dance Ensemble and the Azania Youth Drummers performed in the museum’s courtyard July 17. Little children danced to the drumbeats on a green hill near the entrance, while patrons walked around the Smart Museum gallery, 5550 S. Greenwood Ave.

The exhibition, whose main gallery venue is the Smart, celebrates the 40th anniversary of the MacArthur Fellows program, which awards prestigious fellowships (sometimes called “genius grants”) of $625,000 to a selection of artists, scientists and scholars every year. The MacArthur Foundation, which distributes the grants, says its mission is to build a “more just, verdant, and peaceful world.”

The multi-site show features works by 29 visual artist MacArthur Fellows at 18 different institutions throughout Chicago, including 7 in and around Hyde Park: the University of Chicago Arts + Public Life gallery, the Sweet Water Foundation, the Smart Museum of Art, the DuSable Museum of African American History, the Hyde Park Art Center, the Logan Center for the Arts, and the Neubauer Collegium.

Although exhibit curator Abigail Winograd has organized shows in Museum of Modern Art Warsaw, the Frans Hals Museum in The Netherlands, and the Museum of Contemporary Art in Chicago, she said that “Toward Common Cause” was the largest show she had ever curated.

She began work on the exhibition three and a half years ago: “I was approached by the MacArthur Foundation, which wanted a show that was consonant with the goals of the organization. So, thinking about the ideas of ‘just, verdant, and peaceful,’ I proposed using the commons as a thematic umbrella."

Commons are shared and freely accessible to all; the term in English frequently refers to the shared agrarian fields European peasants maintained throughout the Middle Ages, which were gradually enclosed and privatized by landowners. Wikimedia Commons is a database of images and texts that anyone may freely distribute. Winograd pointed to the Chicago lakefront as an important commons within the city.

Commenting on how she decided on this theme, Winograd said, “It felt like a moment of political urgency. Thinking about what we hold in common in this moment in the world and as a country, with racial reckoning and climate catastrophe. It felt like a good moment to be looking to artists for how they approached those problems.”

She added that “the undercommons,” an essay collection by cultural theorist and 2021 MacArthur Fellow Fred Moten and Stefano Harney, had informed her curatorial thinking.

Dorian Nash, the Smart Museum’s Project Coordinator for Public Practice and one of the primary organizers of the opening ceremony events, explained that she conceived of the opening as an extension of the commons theme: “ ‘Toward Common Cause’ is an exhibition of such magnitude that we wanted to do something really special. We want to be a museum that caters to the academic world, but we’re also in a community. And we want the Smart Museum to become a haven for that community. That’s why we invited everyone in, making it all about the youth.”

The Smart Museum show itself displays a wide-reaching selection from the MacArthur Fellows, with works focused on themes of environmental degradation, economic abandonment, racism, and violence. Winograd said that the gallery’s selections constitute a mixture of works created beforehand by the artists and works commissioned specifically for the exhibition, such as those by Faizal Sheikh and Mark Bradford.

One thread uniting many of the works on display is the broad scope of their concern, whether through the technique of aerial photography or of landscape paintings covering huge swaths of spaces, the works display an abiding concern with structural and widespread, rather than merely individual, human concerns.

LaToya Ruby Frazier’s aerial photographs focus on the abandoned buildings and declining industry surrounding the Monongahela river in her hometown of Braddock, Pennsylvania. Fazal Sheikh’s aerial, infrared videography reveals hidden methane emissions from gas plants. Toba Kedhoori’s wax and oil paintings show a theater and fireplace rendered small, in spite of their size, in the midst of even larger blank canvases. Xu Bing's wide landscape painting depicts a mythologized Kenyan forest, channeling in its style the nature drawings of Kenyan school children he worked with on a related collaborative project.

From these distant views it becomes possible to take in epochal views of the problems which have come to dominate the present political world. Among these works it is Bing’s landscape, produced in collaboration with children, which I observed while hearing the sound of youth drummers in the courtyard, that is the most hopeful.

A previous version of this article incorrectly attributed a landscape painting to the artist Mel Chin. Its painter is Xu Bing. The Herald regrets the error.