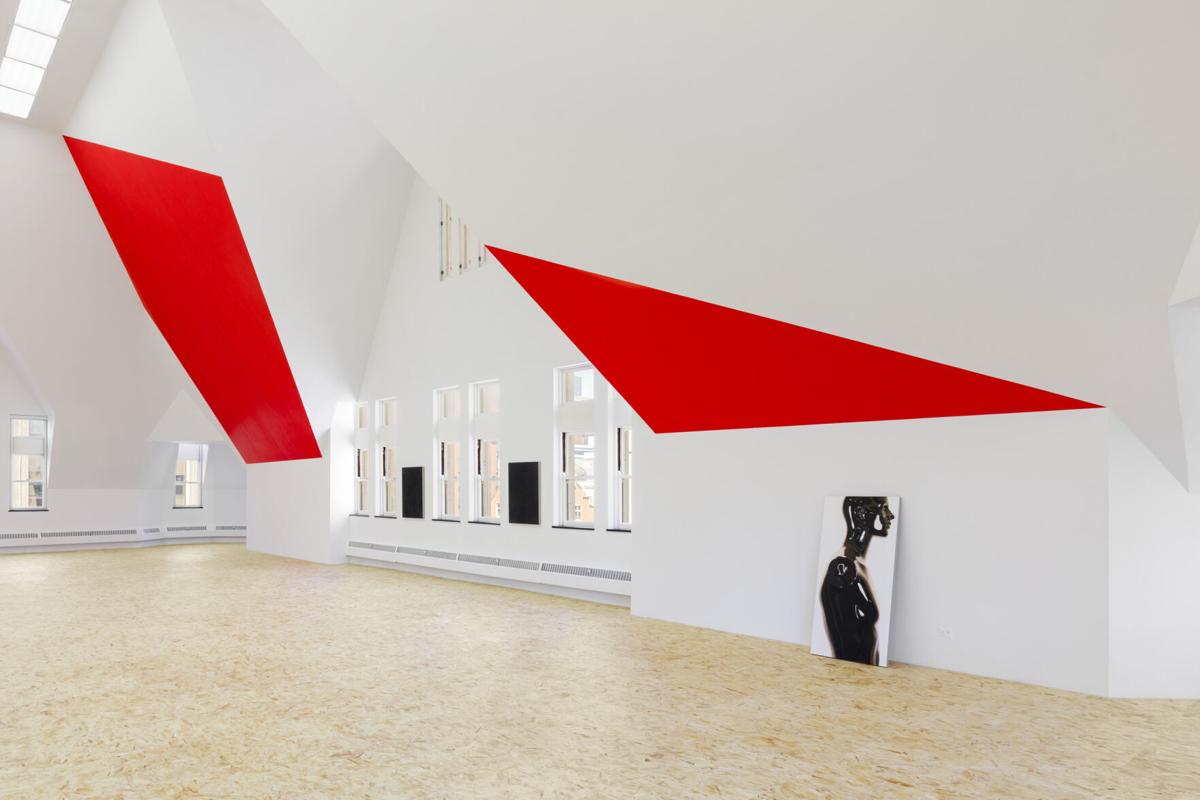 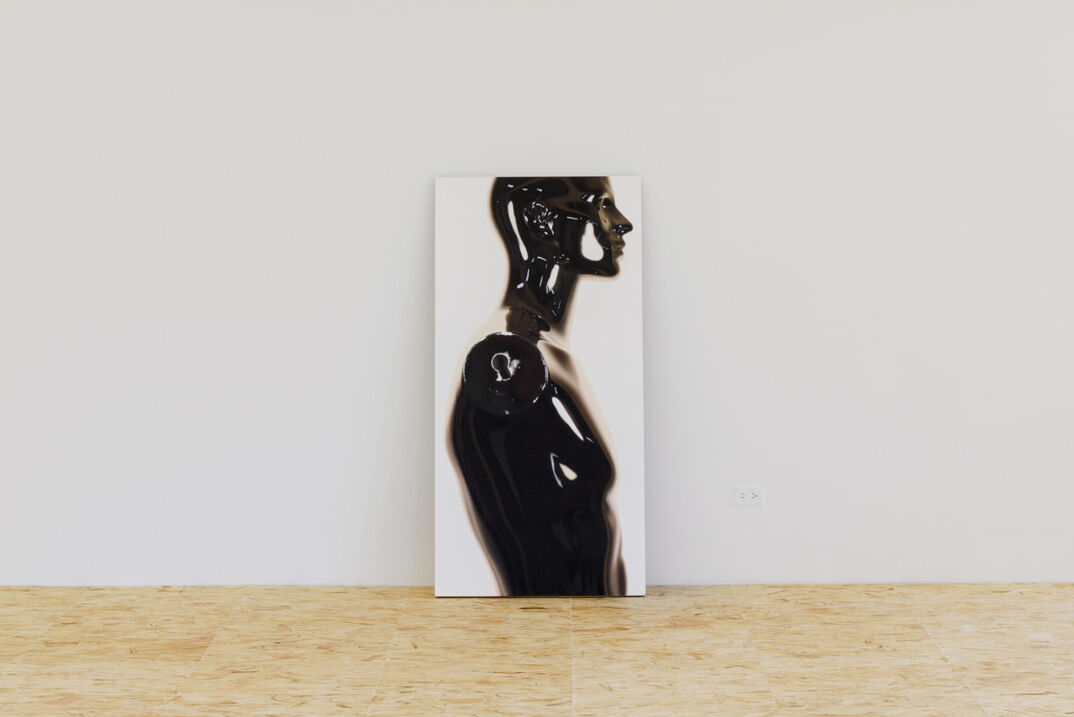 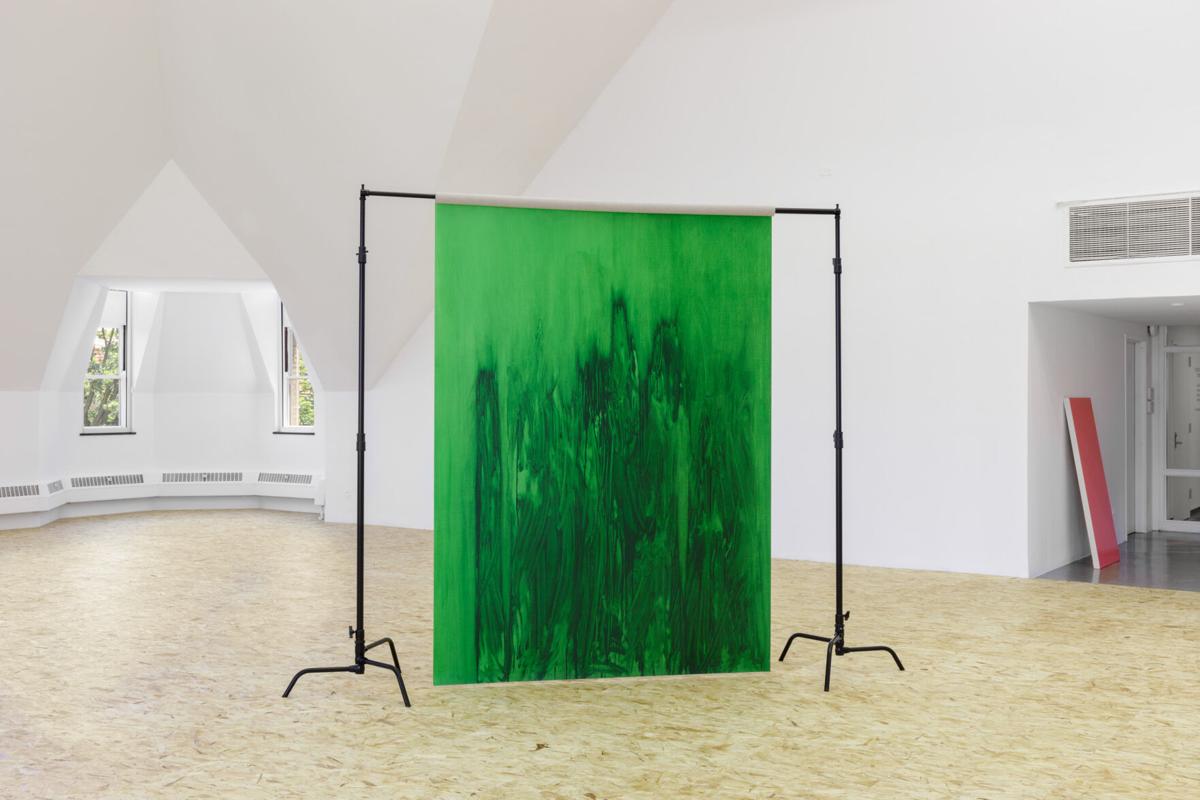 The Renaissance Society’s new show, "Heirloom," contains a set of eight paintings by Chicago artist Matthew Metzger. Four are black paintings that appear to be black sandpaper, all named “Gray”; two are paintings of the same mannequin, both of which appear to be photographs, one the negative of the other, and both named “Still”; there is also an all-red painting (“Wedge”), and a green abstracted painting of the grass above Billie Holiday’s grave (“On Holiday”). Two of the walls in the church-like space have also been painted bright red in a shade specified by Metzger, an embodiment, according to the gallery brochure, of Metzger’s interests in “what he describes as the politics of presence” and a continuation of his earlier painted meditations on the Diver Down flag, which divers float to indicate they are swimming below.

It is a minimal presentation. The scarce and quiet works do not grip the attention, nor do they retreat from it — they are as indifferent as the mannequins they depict, which, despite being modeled on human beings, can never reciprocate, as even painted people can, the viewers’ gaze.

I felt receptiveness and even gratitude towards the quietness of the works, for not cheaply pulling me in, for avoiding over-clear messaging, and for the plain beauty of their colors, which occupy patches in a space rendered vast by their scarcity — and then an opposite feeling, philistine-ish, though natural enough in a world of scammers, that I was being taken in.

This latter feeling had to do in part with my mistakenly thinking (despite reading the event brochure, parts of which I must have glossed over) that the paintings of mannequins were photographs, and that the paintings of black sandpaper were actual pieces of black sandpaper. I thought that neither the photos of mannequins nor the sandpaper seemed too full of meaning, and saying that a red wall was emblematic of someone’s interest in “the politics of presence” was simply asking for too much generosity on the part of the viewer.

There was also a sentence in the gallery brochure, which to me suggested a decadent personality who knows that simply by virtue of placing something in a gallery, it will be taken as pregnant with political and philosophical significance.

It read: “The gallery strategically brings together a collection of ‘odds and ends’, that reorient concepts and motifs shared with a number of (Metzger’s) ongoing series of paintings. He turns to abstraction not as a formal end-in-itself, but as a means of distortion, potentially mirroring aspects of our information ecologies today.”

Here I imagined Metzger, reclining on a chaise lounge, saying, “Oh, these are just odds and ends, you know” — and what are they about? “Well, ‘potentially,’ ‘aspects of our information ecologies’, if you like” — What aspects? What are information ecologies? How do pieces of sandpaper and photos of mannequins clarify anything about them? And here the artist would hide behind the fortress of “that’s for you to decide,” despite there being no clear connection, or a connection so vague as to be unimportant, between pieces of sandpaper and “information ecologies,” or a patch of red paint and the “politics of presence.”

Painting no less than six separate panels so as to be confused with black sandpaper was surely an insane, lacerating labor. Considering that each dot of paint corresponding to a grain of sand, each of a slightly different shade, I could not help but think of the illustration Father Arnall uses to describe the eternity of hell in James Joyce’s “A Portrait of the Artist as a Young Man”: the image of a bird moving a million-mile high mountain of sand one grain at a time once every one million years. Arnall says of the bird’s near infinite labor: “Yet at the end of that immense stretch of time not even one instant of eternity could be said to have ended.”

Metzger’s infernal labor must have been similar to this poor bird’s. In considering it, the images suddenly demand — at first perhaps, more as a token of respect, of awful awe, than a sign of their intrinsic interest — that we pay more attention than we might have, had we thought them mere sandpaper. Simply by imagining someone contemplating, at such great length, and through the movement of his hand, the complexity of this rough object, led me to do the same.

Every dot Metzger drew corresponds to a real grain of sand, itself produced by untold millennia of water breaking against rocks, grains then somehow transported, and affixed to this sheet of paper, itself made of dead trees, each as complex as anything living, a paper in turn encased on one side in glue, most likely hide glue, made from dead animal skins. In contemplating Metzger’s handiwork and all that it corresponded to, this painting of sandpaper revealed itself as a swirl of ancient deaths, and started to resemble the night sky.

A patch of light on the shoulder joint of Metzger’s mannequin started to resemble a gathering of amoebas. A thin halo of orange light surrounds its body; its lack of expression is both repellently fixed, such that one wants to shake it into feeling something, and promises a peace of mind not to be had on this earth.

It is impossible to know that the green painting in the middle of the room is, as the brochure tells us, the grass above Billie Holiday’s grave — her death and the living grass that surround it are obscured through Metzger’s distortions, which distort the grass in a manner resembling the digital “drip” effect sometimes employed in gothic electronic music videos.

The red walls representing the diver down flag are themselves an abstraction of a flag signaling the presence of a human being.

I realized I had been scammed, I had scammed myself, but in the opposite way in which I thought I had been. What was in fact the product of intense labor (which in an artist talk Metzger describes as both “liberating and extremely claustrophobic”), requiring an attention to things and a subservience to their appearance quite unique in the history of painting, appeared as something all too easy, therefore suspicious, therefore without meanings that later became clear to me. So accurate were these representations that they almost precluded thought.

Which brings me to a final thought: what if Metzger had lied about being a photo-realist painter? To find out such a thing would certainly clip the wings of my flying thoughts. It might also be a serious work of art.

Correction: This story initially reversed the names of two sets of paintings, "Grey" and "Still," in the first paragraph. The Herald regrets the error.