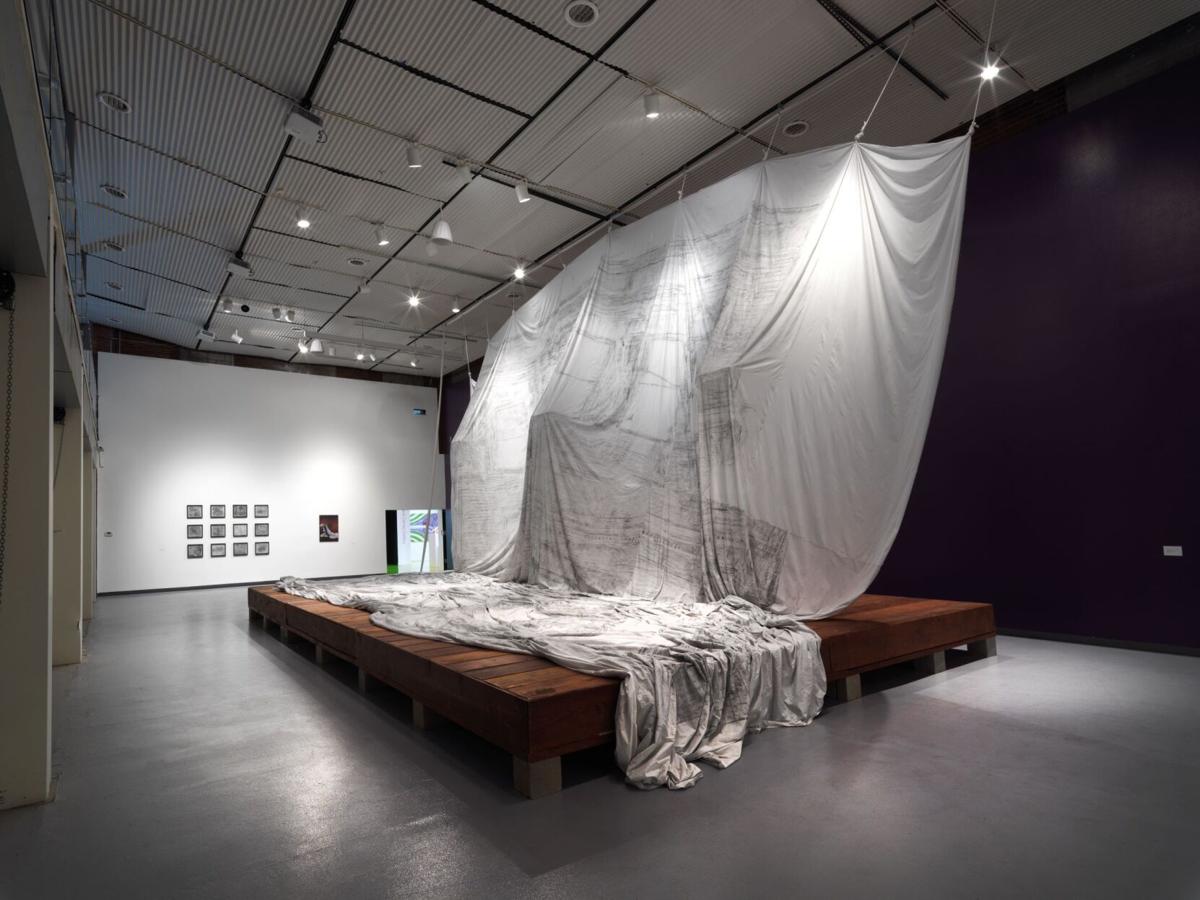 "Planting and Maintaining a Perennial Garden: Shrouds" by Faheem Majeed at the Hyde Park Art Center. 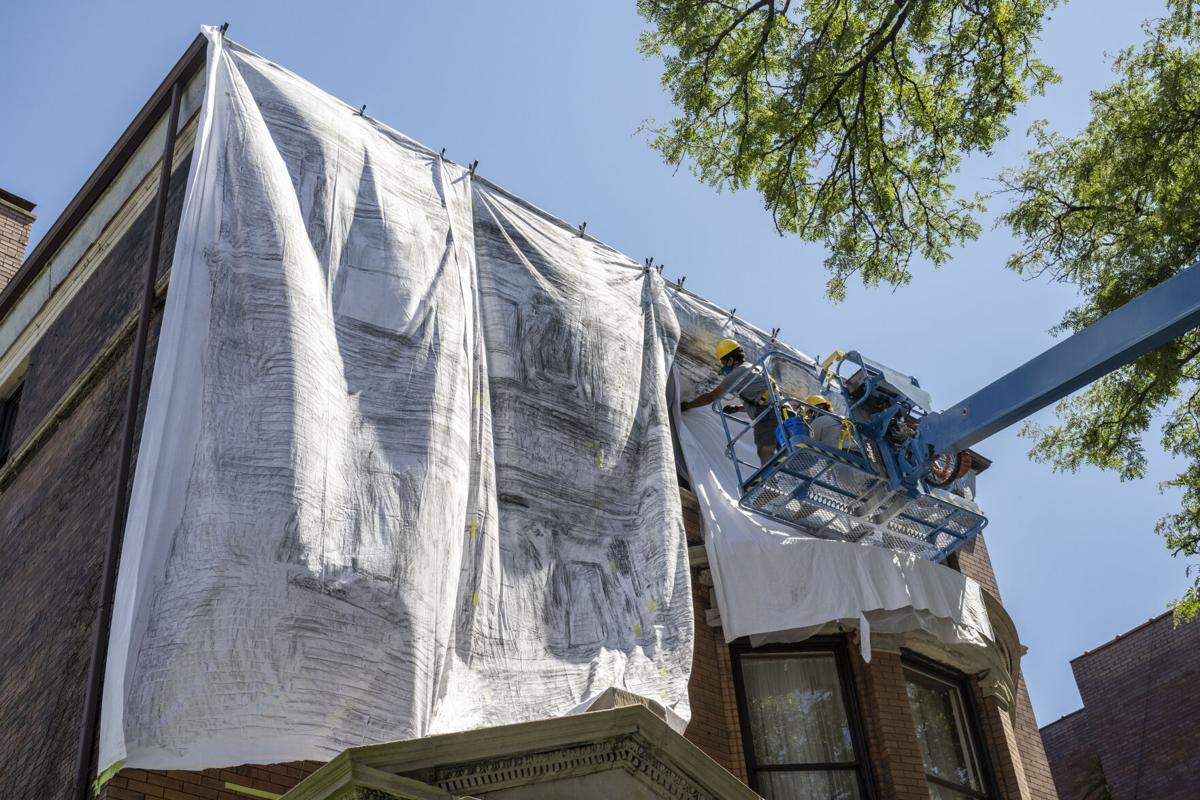 Faheem Majeed greets you at the door to his new exhibit, “Planting and Maintaining a Perennial Garden: Shrouds,” at the Hyde Park Art Center (HPAC). The exhibit is exposed to the street — HPAC’s garage doors are open wide to Cornell Avenue and deep purple walls make a public entrance intensely personal. As you approach, Majeed’s muffled voice, playing from a monitor, lingers in the background, reminding you of his presence and the artist’s connection to his object.

Founded in 1940, the SSCAC is the country’s oldest African-American art center. Faheem Majeed served as its executive director from 2005 to 2011. The exhibit asks: What does it mean for an institution — a culturally specific institution — to create an image of itself?

The exhibit's centerpiece, “Planting and Maintaining a Perennial Garden Shroud,” is a 30-by-25-foot graphite rubbing of the SSCAC on muslin, a woven cotton fabric. Faheem created the work by draping swaths of the cotton over the outside of the SSCAC and, with a team of two others, painstakingly rubbing the exterior. Majeed later sewed all the pieces together. The choice to create an image of an institution using labor-intensive practice grounds the art to a reality, testifying to the SSCAC’s status not just as a concept but as a physical location.

And this institution is alive, growing, and changing. Muslin pools on the floor, and pollen spores gather on it. It dances in the afternoon breeze, light reflecting off of the rubbings. “Shrouds”breathes in and out, flowing with life.

The other works of the exhibit also engage in a silent dynamism. A sprinkling of tawny powder graces the floor under the crumbling “Modernity(Faces 2),” a carving made in drywall. Unswept, the artwork exists in dialogue with its exhibition space. As gentle summertime breezes saunter in and out of HPAC’s garage, the exhibit affects, and is affected by, its environment. This is an exhibit that is always shifting, reflecting the different relationships an institution has with each individual.

“Push and Pull (John Henry’s 11th Hour),” an inkjet print, comments on the director’s relationship with the institution. In it, we see Damon Green, a performer with the Seldoms Dance Company, respond to the emotional gestures of a portrait behind him. Green bears the heavy muslin depicting the SSCAC on his back. It weighs down on him — with bare feet, his right leg bent ahead of his straight, braced left, Green’s head is bowed, nearly enveloped in the image on his back. His shirt is untucked, his suit disheveled.

But the painting to his right is really what drew me in — a Black person with their back to us collides in mid-air with a Ku Klux Klan member in a white hood. Grappling with an anvil in his left hand and a chisel in his right, this is John Henry, an African-American steel driver and folk hero. Steel drivers helped build railroad tunnels, hammering drills into rock to make room for explosives that would clear the way. According to folklore, John Henry battled a steam-powered rock drilling machine in order to test his prowess as a steel driver. His efforts were successful, only for him to die shortly after from the strain the competition had put on his heart.

The painting within the photo — “John Henry’s 11th Hour,” a work of oil on canvas by Bernard Goss displayed at the SSCAC — draws out greater feelings of resistance and exploitation. John Henry’s feet are detailed, with strong lines defining its outline. We see, too, Green’s dark pant leg and bare left foot cutting across the grey of the muslin. The Klan member, on the other hand, is cloaked in an air of monstrousness, as talons extend out from his white cloak.

Under the oppressive hold of whiteness, the South Side Community Arts Center functions as a safe haven of Black arts and culture. But that safe haven is under constant threat — in “Push and Pull,” the shroud envelops Green’s head, wrapping around it until it resembles the Klansman’s white hood. Leading the SSCAC, like battling the machine, may in some ways be heroic, but it is also dispiriting.

The culturally specific institution lives in persistent disquiet —  these institutions can never live up to their charge. They confront a history (and present) that is in turn harrowing and hopeful, and are forced to make choices about representation and resistance. They exist within the penumbra of white supremacy, giving them a reactive character, a certain set of expectations. (This shows up in the day-to-day lives of the members of these institutions, too: Majeed began wearing a suit — the same on Green wears in the inkjet — after a critical email from a SSCAC board member.)

The culturally specific institution confronts an impossible task: What image should the institution present in order to represent and make heard a diverse set of people? Indeed, there is Black representation, but within constraints — this image of an African-American institution is displayed in the HPAC, a predominantly white institution. Majeed staggers along in “Push and Pull,”but only just— the work is painful, the process dirty, the results dissatisfying.

“Perennials 1-12” depicts twelve images using graphite on muslin. In it, we see the weaker points: crevices between boards of wood, looser pieces. We encounter the nuts, the bolts, the minute factors of an institution that hold it together and undergird its logic.

“Planting and Maintaining a Perennial Garden: Shrouds” will be on display at the Hyde Parks Art Center until July 24. Tickets are available for free by reservation; the garage door remains open to the public, weather conditions allowing. www.hydeparkart.org