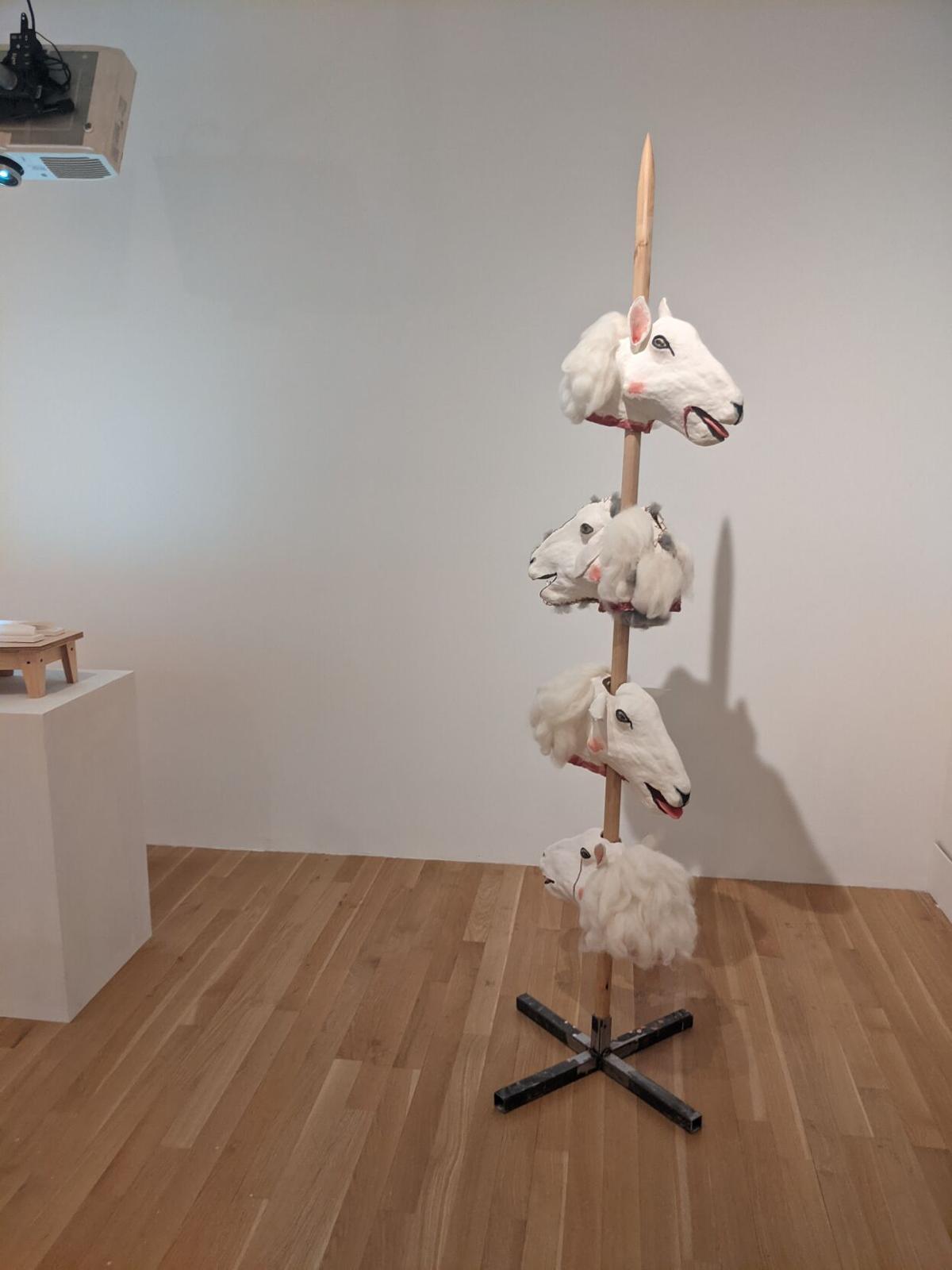 "in sheep's clothing" by Martin Girardi 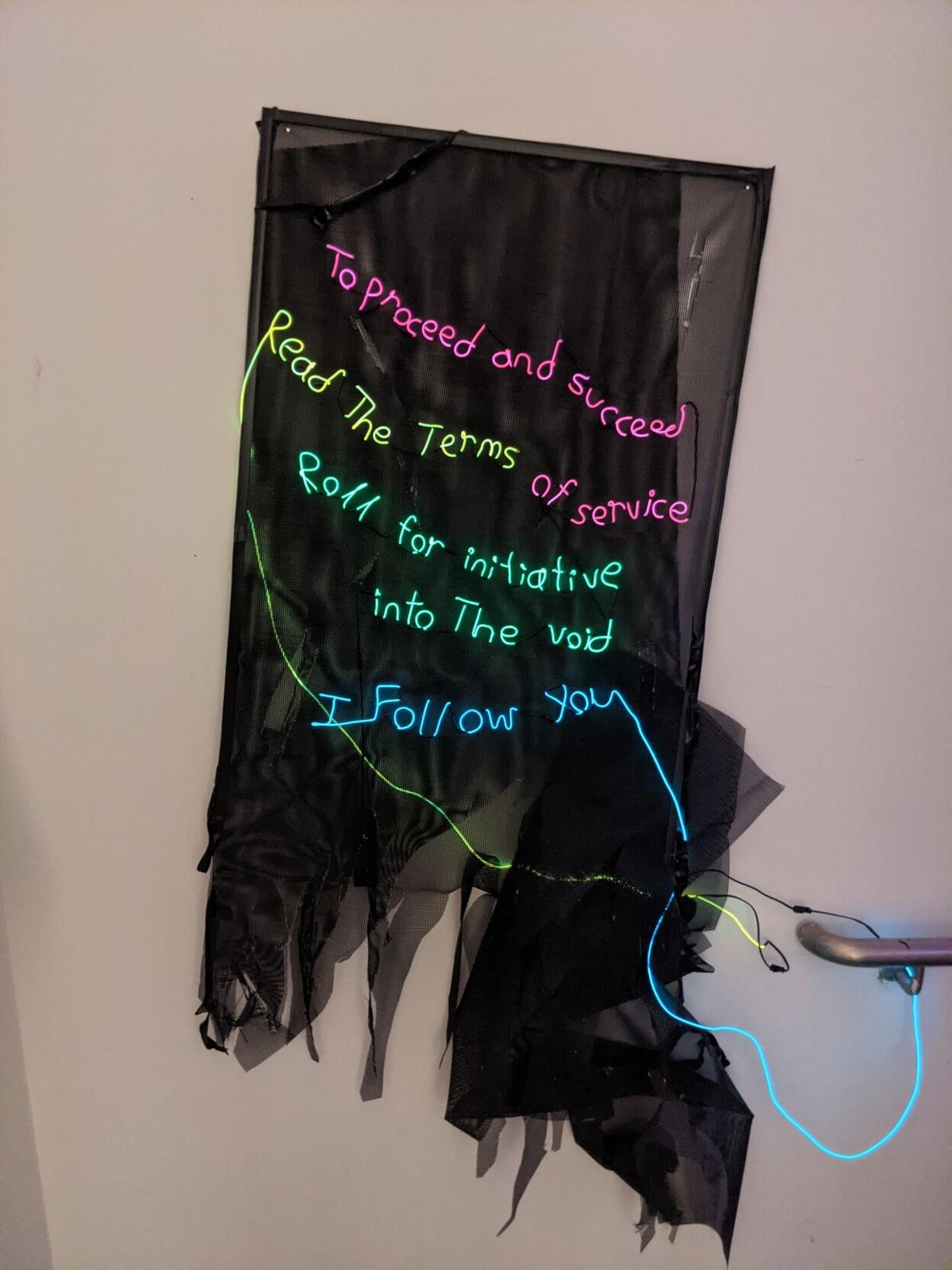 It can be fun and even necessary, from time to time, to wander through life like an alien which has little understanding of what it is seeing and which is just now learning what the things of the world are. It freshens life and eliminates jadedness, an important thing for a critic to do, especially if he or she is confronting art created in a time of life that he or she is keen to leave behind, a time of anguish and unearned self-seriousness: the undergraduate years.

In this spirit, let us set the alien scene. It is a room at The University of Chicago, a place where people learn about things and say things as if they know them, including such things as how Urdu poetry ought to be translated and how human flourishing follows from people adopting entrepreneurial mindsets and not receiving money from their governments.

In one building in this complex of spaces is a gathering of objects meant to reflect the world at present and at the same time the inner worlds of the people who made the objects. It is an “art show” entitled “youre muted” (an allusion to Zoom meetings, the typo is intentional).

The objects were created by undergraduates at the University in the terminal year of their education. They are housed in a gallery that provides shelter from the sun and rain. The gallery contains many different kinds of things.

In listing them we may hope, as an alien or archaeologist does in traversing a foreign world, to obtain a naive understanding of the time of life of the artists and of the world they depict.

Here is a list of things inside the rooms, as well as some questions had about them:

A Hat-rack supporting five impaled goat heads, with white woolen wigs (why do the wigged sheep look like George Washington? Does this artist so disrespect presidents as to see them this way?)

Sack like dripping structures dangling on a skeleton of found wood

A pile of soil and horse manure (are these meant to make the space feel congenial to animals? Or to make humans feel estranged?)

Chairs glued together and covered in gray globs

Diorama-like installations reminiscent of zoomed-in photographs of quasars; they are also like galaxies composed of scabs

Video of an animated black ski-mask, in which bloom two sunflowers, set against a backdrop of what appears to be a Church ceremony for greasers

A female form curled in on itself, next to flowers. Its viewer is instructed to listen to the musician Mitski.

A couple having disinterested sex in a room covered in flowers; one of them, it is not clear who,  says “I’m sorry I’m feeling a little lost.”

Both the American flag and the promotional flag of 46th President Donald Trump pinned into the wall by a backwards facing blank white canvass (do multiple artists here disrespect presidents?)

Paintings of a deer-human hybrid driving down a dark highway, tinged with neon paint (do these artists view the United States as a dreamscape?)

Blurred photographs of empty suburban cul de sacs (they must view the United States as a dreamscape?)

Two works alluding to suicide. One features a boy with a plastic grocery bag over his head flashing two peace signs, and the other shows a pair of feet kicking out a support beneath them, then dangling as if their owner had been hanged, and then revealing that the owner is actually playing on a rope swing (has suicide become unserious for these artists? Desirable, perhaps, if it were not as unserious as everything else?)

An animated video in which hallways melt into one another, dripping like swamp weeds, and pages turn furiously

A video of a CTA train projected onto two screens joined at a right angle, and a thin young man’s body off to the side

Charcoal animation projected onto a wooden board covered in white ridges

In producing this catalog, we can naively conclude some things about some of the beings that made these works, about the world they live in, and their time of life: some are dissatisfied with American presidents and culture writ large, some wish to do damage to its symbols, including symbols from their childhood and from the corridors of power, others feel ill at ease with their bodies, others have nebulous feelings, some enjoy Chinese food and other forms of fast food, some feel bodily identifications with machines and transportation, some play games online, some wish to undermine the seriousness of artistic galleries and in despair, of suicide, some wish to bring nature into the gallery, some are very gifted, some have constructed an alternative and powerful world from the materials of their own life (especially Evelyn Shi, whose installation of gamer texts and Taco Bell packets was charming, beautiful, and funny), some are playful and gay, some have robust woodworking techniques, and many, many of them feel estranged, like aliens themselves.

By appointment only; book tickets at bit.ly/youremuted