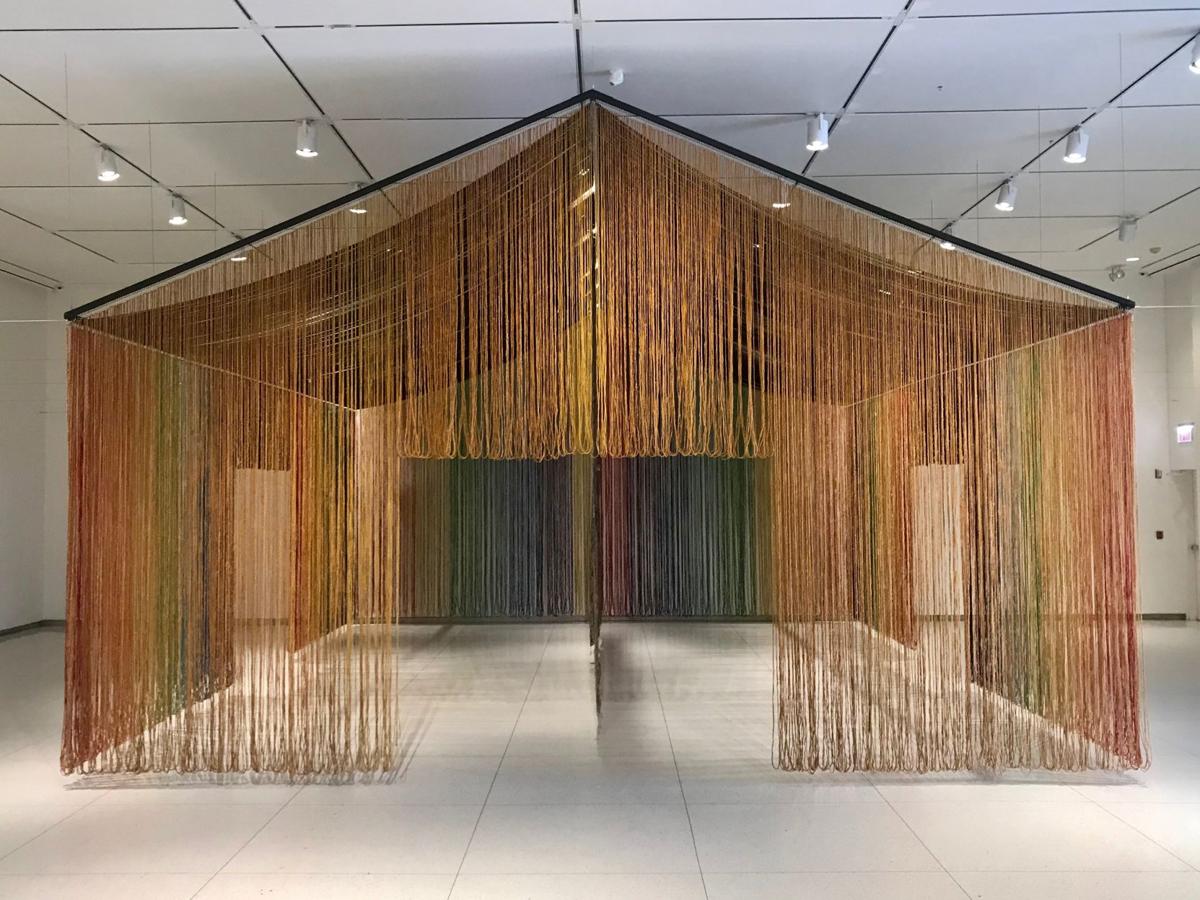 gu wenda’s “united nations: american code,” made from human hair and commissioned for the exhibition. 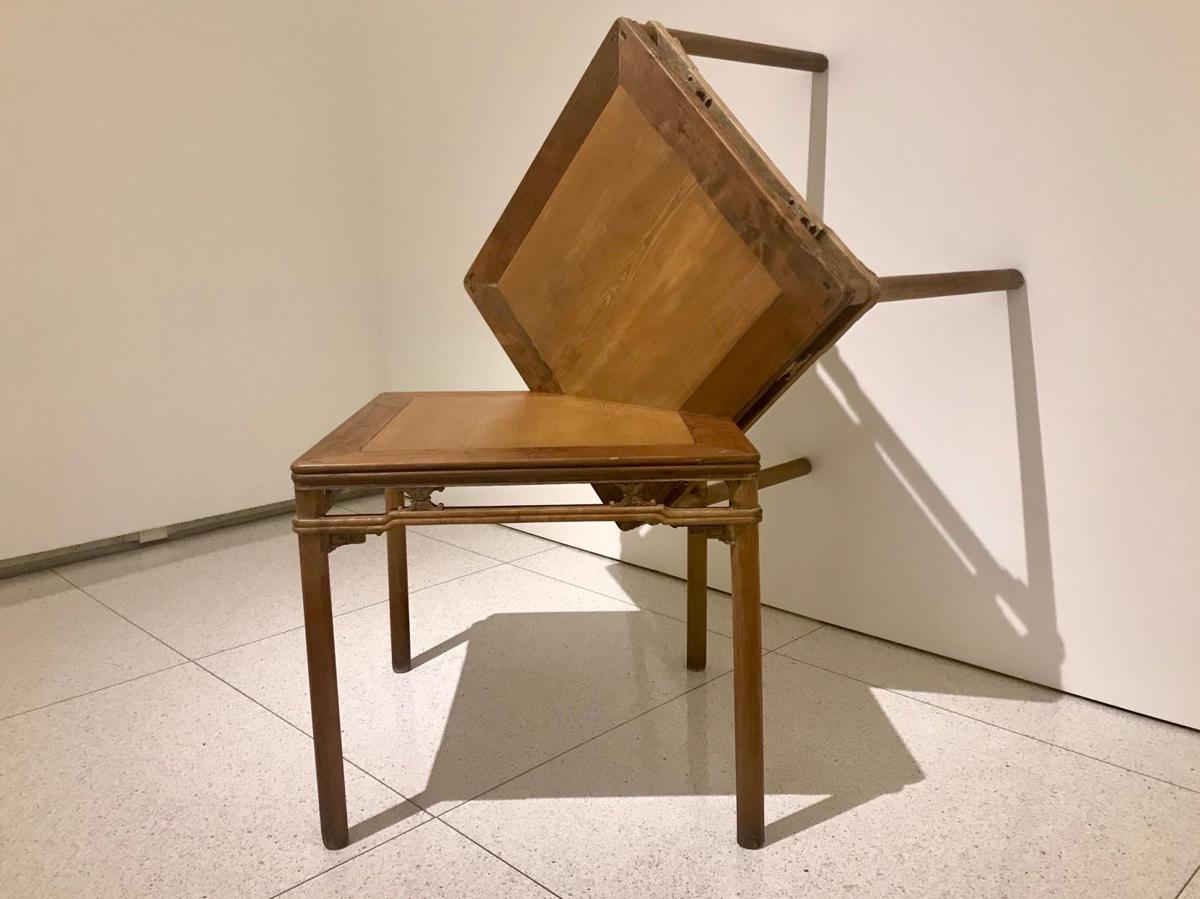 gu wenda’s “united nations: american code,” made from human hair and commissioned for the exhibition.

A new exhibition on display at the Smart Museum at the University of Chicago and Wrightwood 659 in Lincoln Park conveys how Chinese artists have used raw materials ranging from silk to paper to steel in large-scale conceptual works to depart from socialist realism and traditional forms since the 1980s.

All the works are part of a movement that exhibition curator Wu Hung, a U. of C. art historian, originally dubbed “material art.” “[It categorizes] work that was done with a kind of forward-facing materiality," explained Gina Pollara, chief operating officer of Wrightwood 659, 659 W. Wrightwood Ave., in an interview.

In Lincoln Park, Shi Hui's "Float" contains abstract forms made from wire mesh and "xuan" paper pulp (used for ancient Chinese calligraphy) that hang up and down the museum’s atrium. Liu Jianhua's “Black Flame” contains 8,000 little dark porcelain flames rising up from the gallery floor, inspired by work alongside his uncle as a 14-year-old in a porcelain factory.

Five hundred thousand cigarettes, faintly scenting the air with unburned tobacco, make up Xu Bing's mosaic “1st Class” on the floor at the Smart Museum, 5550 S. Greenwood Ave. He Xiangyu's "A Barrel of Dregs from Coca-Cola" is a glass case full of boiled-down pop, turned into resin. gu wenda's "united nations: american code" is a monumental house created from dyed human hair, commissioned for the exhibition, containing a made-up flag with a five-pointed star, just like those of China and the United States.

While many of the works are recent, recognizing the artists’ historical context is important to understanding the show’s purpose. They came of age around the end of the Cultural Revolution in 1976, at the same time that many Western artists were dealing with the same themes through fluxus art and process art. Material art was, and is, materials-forward — not focused on representation or a particular message.

"The material was effectively the first message," Pollara said. "After that, you would begin to uncover the other layers of meaning behind the art."

In an interview, Wu said he was interested in presenting works that were distinct from those he has shown during more introductory exhibitions at the Smart Museum and the Museum of Contemporary Art, 220 E. Chicago Ave. After a large amount of research, Wu realized he wanted to focus on the artists’ choice of materials, not on chronology or history.

"Many artists really became fascinated by these special materials," he continued. "They went out and discovered them, to take ownership of these materials, often working with the materials over a long period of time."

Wu called the art on display "a manufactured way to get away from the standard education in China, basically realism or academic studio art" that was charged with the politics of the day. The materials offered freedom. "If you study the life and the career of these artists, they often first started in the art academies. Then after graduation, they got the chance to change course," he said.

"Transformation" and "Black Flame" both call to mind the work of American artist Allan McCollum, known for his works on mass production where little recreations of mundane items are arranged one after the other thousands of times. And themes of reproduction come up at both the Smart and Wrightwood 659 through Zhan Wang's stainless steel recreations of Chinese scholar's rocks. In a video piece on display at both museums, Wang records himself taking one of them 12 nautical miles into international waters and letting it float away.

"For me, there's a couple of themes that run through the show," Pollara said — memory among them. "Some of it is the juxtaposition of the contradictory nature of the materialism" she continued. "Here you have this rock that floats: this thing that should sink but is very buoyant."

Beyond "Transformation," there are two pieces from Liu Wei's wall-mounted "Exotic Lands" series in Lincoln Park, taken with found stainless steel and discarded wooden doors, as well as Zhang Huan's abstract "Ash Painting No. 5," made with the remnants of burned incense. In Hyde Park, Zhang's painting "Seeds" uses tint-sorted ash alongside charcoal and resin to present an image of farmers at work. Pollara said themes around labor, both among Chinese workers and the artists on display, are also at play throughout the exhibition.

"The Allure of Matter" is on at Wrightwood 659 until May 2 and the Smart Museum until May 3; it occupies both museums' entire gallery spaces. After more than four years in development, it premiered at the Los Angeles County Museum of Art and will travel to museums in Seattle and Salem, Massachusetts, after its Chicago run.