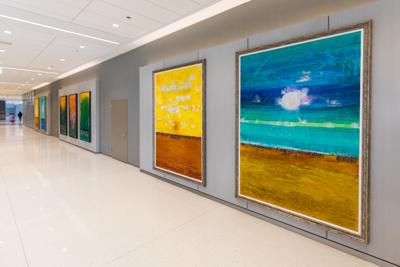 Walk into the lobby of the One Two Pru office and retail building downtown, and you'll be met with a taste of art from the African Diaspora. The installation, which is currently open to the public, is put on by Gallery Guichard, the Black-owned art gallery located in the Bronzeville Artist Lofts that focuses on works specializing in the African Diaspora.

“I wanted to represent Chicago, everybody coming back to work, and some normalcy after COVID. So you know, it's all about, we will rise again, and the city is a great city,” Francis Guichard, co-owner of Gallery Guichard said, explaining her works entitled, “The Sun will Rise Again” and “The City Never Sleeps.” Guichard says she became inspired to create the works after a trip to South Africa.

The gallery features works from Francis and Andre Guichard, Stephen Sayo Olalekan, and Adam Guichard. Each one of their works embodies the spirit of the native African experience, creating bold statements in the space.

Olalekan’s work features six sculptures inside frames that are reminiscent of the human body, but depicted in a more free-flowing light. Olalekan, who is Nigerian, says he refers to the work as Rhythmic Sculptures because of the flow and appearance of the figures. “(It’s) just the complexity of human minds and body, and then how they function together. So just finding a way to simplify them through my heart, that’s what I did.”

Olalekan says that it took him about two months to complete the work for the gallery, but looking at the details of the sculptures as they hang on the walls of the lobby, they look as if they could have taken years to create.

Of the three artists who were present for the gallery’s opening, Andre Guichard was the only one who had not created a new work for the show. Instead, he used a piece that ran in Prince’s 2012 Welcome 2 Chicago concert. He says the work fits perfectly with the theme for the lobby, and found it powerful because of its message of togetherness and love.

Keiana Barrett, director of diversity and inclusion at Sterling Bay, reached out to Gallery Guichard and brought to their attention that there is little African-American representation at the executive level of most companies. After that conversation, the couple thought the gallery presented a great opportunity.

“It also helps when we were able to reach out and work with people outside our own networks, and outside of our own community. We're able to help other artists and artists are able to build wealth because now their artworks are being exposed and people are purchasing the artwork — they're getting more recognition through just being in the space,” said Andre.

Andre and Francis spoke on the successes the gallery has experienced throughout the pandemic, they never officially closed and have been able to host people by having virtual shows where artists talk about pieces online to viewers. The virtual shows have been archived and are still able to be viewed on their website, “After an exhibit was done, it was gone. But now we can keep these exhibits and share them nationally.”

The duo said they have actually sold more art during the pandemic because of the need for art to be more than just a decoration piece, “I would say  [we sold] over 100 pieces approximately, just because the pandemic also changed how people saw our product. It used to be okay, I bought a new house, I've got these walls, I need some decoration. It changed from decoration to wellness,” explained Andre Guichard.

The current pieces in the "African Diaspora: Chicago" gallery will be switched out in six months, giving other artists a chance to be featured.